As some drop hints about running for Alaska governor in 2018, Walker remains a wild card 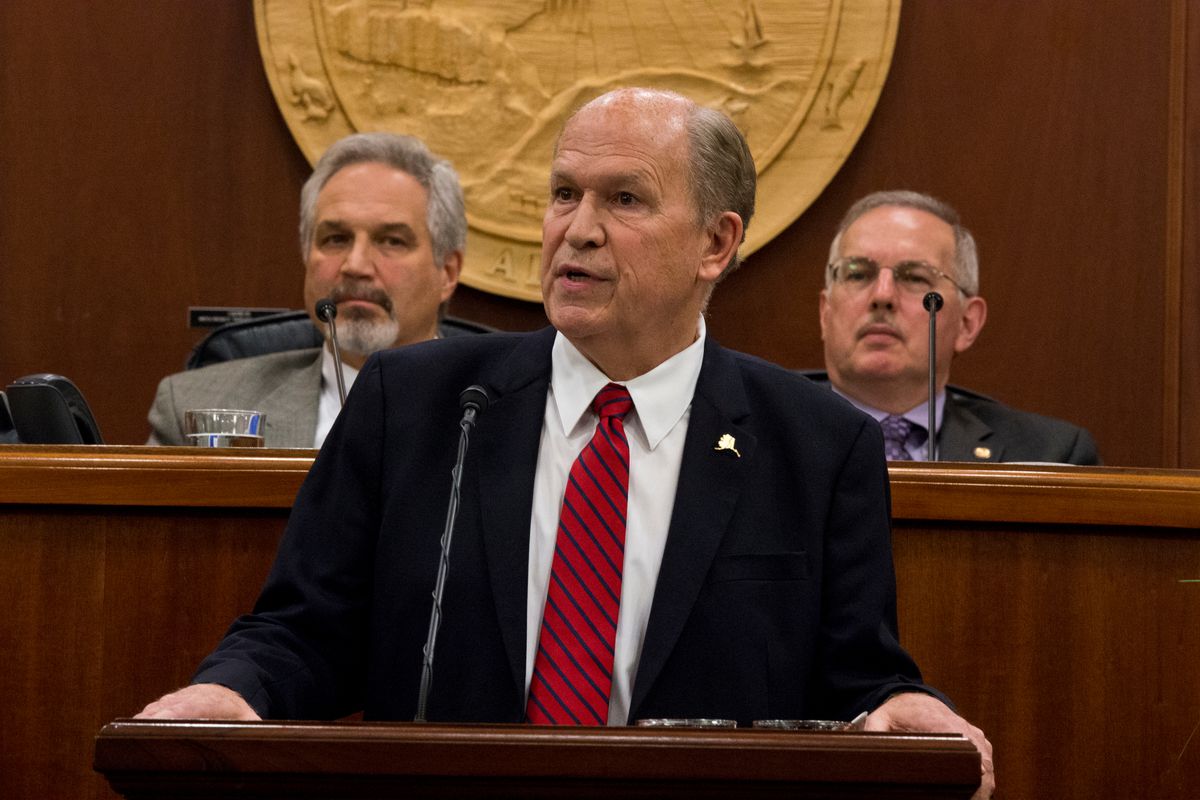 Alaska's political world is beginning to train its focus on next year's election for governor as the state Legislature heads toward its finish.

But discussions about the race, a year and a half from now, still center largely on hypotheticals and unanswered questions about who might run, and how.

Will the incumbent, independent Gov. Bill Walker, register as a Republican or Democrat and run in a partisan primary? Will he run at all? He's not saying yet, though the Alaska Democratic Party, which backed Walker's 2014 campaign, is taking steps that could make it easier for it to support independent candidates.

Will former Democratic U.S. Sen. Mark Begich run, as some Republicans fear? He's not declaring anything, either, though he acknowledged in a phone interview that "there seems to be more speculation on what I will do than the stock market."

And what about the 63 possible Republican candidates who, at one point, were on a list kept by an Alaska GOP official, vice chair Rick Whitbeck? He's not revealing them — though the party's chairman, Tuckerman Babcock, is himself getting a little impatient to see which rumored Republicans actually launch campaigns.

"People ask me: 'Who's the candidate? How are we going to avoid having too many candidates? Should we back this person or should we support that candidate?' " Babcock said. "It would help a lot if the candidates who are serious about running for governor would file, have a campaign and start the process."

Candidates were allowed to start filing election-related paperwork earlier this month, and two fringe contenders have: Jacob Kern, who drew less than 1 percent in each of the last three Anchorage mayoral elections, and Michael Sheldon, a Petersburg handyman.

Perhaps the biggest question looming over the race is what Walker does. He was a lifelong Republican but dropped his party registration in 2014 when he teamed up with Democrat Byron Mallott and defeated Republican Gov. Sean Parnell.

Mallott was the Democratic gubernatorial candidate, but he agreed to run for lieutenant governor instead and merged his campaign with Walker's. The "unity ticket" drew support from Democrats and organized labor, who helped Walker win an upset.

Walker has said he'll probably seek re-election. But he hasn't said whether he'll contest the Republican primary — which could complicate his alliance with Mallott — or run again as an independent, or register as a Democrat and seek the Democratic nomination.

Walker's campaign spokeswoman and daughter, Lindsay Hobson, declined to comment, saying Walker won't announce any political decisions until after the Legislature — which is currently in the middle of a special session — wraps up.

Mallott said he and Walker are "very happy together," but wouldn't offer any more details about their plans for next year.

"There have been conversations of all kinds and people can speculate and people can talk to us, but the governor and I are concentrating on doing our jobs," Mallott said in a brief phone interview Friday. Mallott added: "When the special session is over, we'll likely have an announcement of some kind."

If Walker wants Democratic support again, he'll either need to run in the party's primary or hope to somehow draw a post-primary endorsement from party leaders like in 2014, said Jay Parmley, the Democrats' new executive director.

The party in February also re-filed a lawsuit against the state that, if successful, would allow independents to run in the Democratic primary. A judge dismissed a similar lawsuit last year, saying that Democrats needed to approve a corresponding change with party rules first, which has since occurred.

The effort could benefit Walker but wasn't specifically made to help him, since it was originally aimed at allowing the party to aid an independent U.S. Senate candidate last year, Parmley said.

How exactly the Democratic Party might work with Walker on his re-election campaign hasn't yet been determined, Parmley added.

"What was clearly a delicate arrangement that made a lot of sense — and was a nice, neat marriage that worked well — now presents the same complications almost four years later to make anything like that happen again," Parmley said. "And zero discussions have been had about what that might look like. Everyone agrees on one thing, which is that nothing's going to happen until after session's over."

Begich is another possible Democratic candidate — at least in the minds of Republicans, who since last year's party convention in Fairbanks have been pondering how to defeat him if the former U.S. senator decides to mount a campaign.

In the phone interview, Begich, who runs a consulting firm he founded after losing his re-election bid in 2014, said people ask him about his intentions every day.

As for potential Republican candidates, one is Dunleavy, who was first elected to the Senate in 2012. He's a social conservative who earlier this year split from the Senate's GOP-led majority, saying it wasn't cutting the budget deeply enough — though he also supports spending an extra $700 million on Permanent Fund dividends to restore the portion of the payments Walker vetoed last year.

Dunleavy, in a phone interview, said he expects to make up his mind some time in June, leaving him time to campaign over the summer.

"I am giving it serious consideration," he said.

Another possibility is Hawkins, a business owner who's also dabbled in politics in recent years, working with a GOP-aligned super PAC, the Accountability Project. Hawkins heads Advanced Supply Chain Integrators, an Anchorage business that works with mining and oil and gas companies.

Hawkins said in a phone interview that he thinks 2018 could be an opportunity for a relative political outsider with business experience — given how the state Legislature has struggled to design a plan to fix the state's huge deficit.

"One of the reasons I'm looking at it is I think it's going to be a good time for some fresh blood," Hawkins said. "I think my skill sets line up well for the job — that's really about it. I'm just going to explore it for the rest of this year and see if I actually take the plunge."

Third is Chenault, Alaska's longest-serving House speaker, who's still in the Legislature after giving up his gavel this year.

Chenault, in a brief phone interview, said he's considering a gubernatorial campaign — though "not a lot right now because we're in session."

More names, including business figures and sitting and retired legislators, are being passed around the state's political circles. But of a half-dozen more who were contacted, none confirmed a specific interest in a gubernatorial campaign in 2018.

Republican officials are leery of the prospect of a crowded field that could distract from their primary message — that Walker needs to be replaced. Party leaders don't have much leverage to keep candidates from declaring, though Babcock, the chairman, said he hopes to poll delegates at the party's convention next March to give guidance to GOP voters.

"I can cajole people not to run, but it's a free country," Babcock said.

The "continuing saga" should come into sharper focus over the course of the year, since candidates will need to file to avoid missing the chance to collect the maximum allowable campaign contributions in both 2017 and 2018, said lobbyist Ashley Reed.

"Unless you have the ability to self-fund, you really need to get out there," Reed said.

But another lobbyist and political consultant, Jim Lottsfeldt, said he thinks gubernatorial hopefuls could wait all the way up until next spring's filing deadline to announce, given the potential for deep-pocketed super PACs to promote and advocate for candidates.

The election, Lottsfeldt added, is "eons away, in political terms."