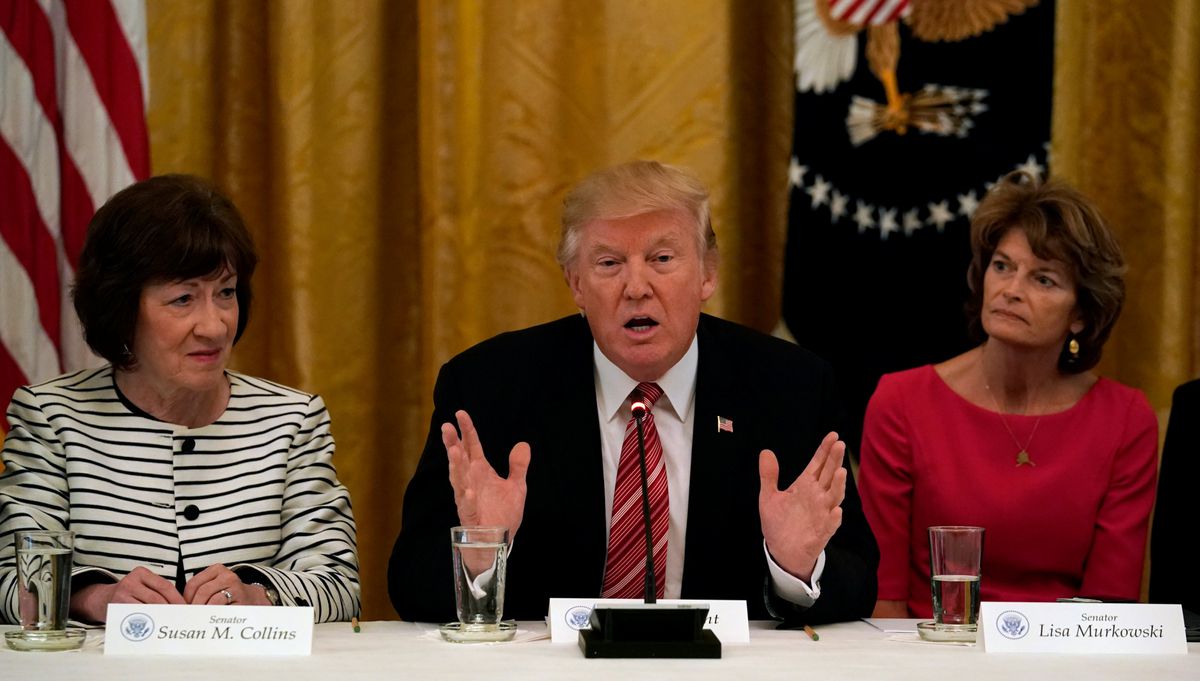 WASHINGTON — Alaska's U.S. senators weren't ready to vote for the Better Care Reconciliation Act anyway, they said in the hours leading up to the announcement that Republicans would wait until after Independence Day to take the tally.

Neither Sen. Lisa Murkowski nor Sen. Dan Sullivan, both Republicans, was prepared to say yes to the bill. Sullivan, considered more conservative than his Alaska counterpart, appeared closer to accepting the bill than Murkowski.

"I support Senate leadership's decision to withhold the vote in order to better address the concerns of members," Sullivan said in a statement Tuesday, noting that he also appreciated a meeting for Republican senators at the White House with President Donald Trump and Vice President Mike Pence.

"As we move forward, I will continue to work on the draft of the Senate bill to make it better for Alaskans by continuing to focus on what's worked under the Affordable Care Act — like continued coverage for those with preexisting conditions — and to replace it with a bill that will better serve our state," Sullivan said in a statement.

Alaska Dispatch News spoke with Murkowski about an hour before the GOP meeting Tuesday where Senate Majority Leader Mitch McConnell announced that no vote would be held until after the July 4 recess. A few hours later, Murkowski joined her Republican colleagues at the White House for a meeting with President Donald Trump. Trump sat between Murkowski and Sen. Susan Collins, R-Maine, who had already announced her opposition to the bill as is.

Murkowski said Tuesday that she wasn't ready for a vote, and many of her questions about the bill's potential impacts remained unanswered. She had plans to check in with hospitals and providers in Alaska later in the day, meet with an Alaska cancer survivor, and was still waiting for hard-to-come-by data regarding health care in Alaska.

For now, Murkowski said, she still has questions about how the bill's provisions would ultimately affect Alaskans.

The fact that the Congressional Budget Office said that the bill could leave 22 million more Americans uninsured "absolutely" caused Murkowski "great concern," she said. But "what I want to know is, what does that mean to my constituents in Alaska? Who is this, then? What is that impact to them?"

"What I'm learning is the same problems that we had before, under the House bill, are still there. That the tax credits don't take into account much of our high costs."

Murkowski made clear during House negotiations that she was not a fan of the House bill and would not have voted for it. (Alaska Rep. Don Young voted for the bill, but said he only did so after leadership promised changes in a final version.)

Monday night, Sullivan said in an interview that he was continuing to dig into the bill, and "there are structural issues that make the cost of health care and insurance in Alaska very significant that make us an outlier on a number of fronts."

"I'm not saying one way or the other where I'm at yet, but getting to yes on the bill makes it important for those issues to be addressed," Sullivan said.

Asked if by that he meant that he wasn't a yes yet, Sullivan responded, "Not yet."

There's a tension, though, Sullivan said, between a process that he wished "was more open and transparent" and "the need to act."

There is "an urgency to stabilize the markets and try to bring relief to people who, let's face it, have been suffering through these premium spikes," Sullivan said.

But Murkowski did not seem convinced Tuesday that the Senate bill — the Better Care Reconciliation Act — would solve those problems.

Without more time to understand details, Murkowski said it's difficult to even craft a plan for specific changes to the bill.

"Alaska is such an outlier … When everybody else has high costs, we have higher costs. When there is an impact to one, we have a greater impact," Murkowski said.

Limiting changes to the structure of subsidies for people who buy insurance on Alaska's exchange would result, for many, in higher premiums and/or deductibles, often beyond what is affordable.

Asked about a potential sweetheart deal for Alaska's high-cost exchange, Murkowski didn't think it would do much to draw her vote.

"Think about it: If you had subsidy changes that only affect Alaska, but don't do anything with regards to the impact of the Medicaid cuts, I don't see how that can help the balance here," she said.

Though Murkowski's focus is centralized on cuts to Medicaid, the senator was not necessarily concerned with new revelations that the bill might put expansion — which has added more than 30,000 Alaskans to Medicaid — in the hands of the state Legislature.

"It's kind of a twist. I wasn't expecting this yesterday," she said.

Murkowski suggested that her support for Medicaid expansion in the state hinges on continued support from the state Legislature, which previously sued over Gov. Bill Walker's decision to expand the program in the state.

Nevertheless, Murkowski said she has "come to recognize and appreciate what it is that Alaska has gained because of expansion," particularly in its help to Alaskans "caught up by this opioid crisis, the ability to treat so many more than we otherwise would have," she said.

And though there is now more time to negotiate, Murkowski wasn't optimistic about a deal that involved more spending. The Congressional Budget Office "score" of the Senate bill found that it produced $200 billion more in savings than the House bill. Many in Washington speculated that that money could be used to draw in undecided Republican senators.

"If you spend some of that savings to provide for more robust benefits, that may help people in high cost states like us, it might help, for instance, those other states that are suffering dramatically from the opioid crisis, but what does that do then to the group on the other side that says that you're spending too much money, that there's too much support out there?" Murkowski said.

The divide in the Senate is not only between parties but also among Republicans, Murkowski said.

Murkowski has been reluctant to speak to national press or declare her intentions as to the vote, even as more Republican senators announced, after the delay Tuesday, that they would not vote for the original draft of the bill.

"I don't look at it as whether or not I am a deciding vote. I have to look at it from the perspective of, 'is this measure sufficient for the people of Alaska to earn my vote,' " she said.