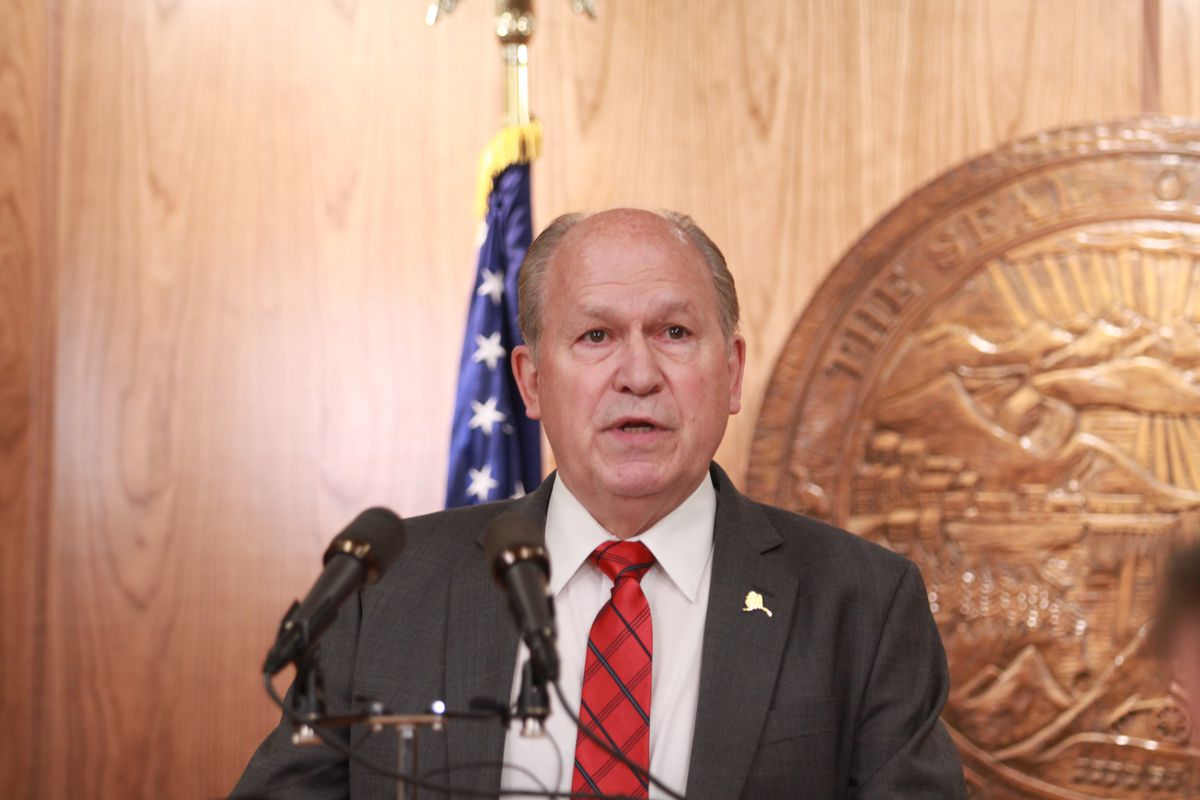 Alaska Gov. Bill Walker speaks at a news conference at his office in the Capitol in June. (Nathaniel Herz / Alaska Dispatch News)

Alaska Gov. Bill Walker speaks at a news conference at his office in the Capitol in June. (Nathaniel Herz / Alaska Dispatch News)

Alaska Gov. Bill Walker signed Alaska's annual operating budget into law Friday without line item vetoes — a sharp contrast from last year, when he used the veto to slash more than $1 billion for Permanent Fund dividends and other programs.

The new budget spends $3.73 billion in unrestricted general funds on state agencies — about 3 percent less than the $3.86 billion in last year's budget. It also allots an estimated $1,100 for each Alaskan's Permanent Fund dividend.

Lawmakers reduced the dividend amount by roughly half from what it would have been under the historical formula used to calculate dividends.

The leftover money was initially expected to go toward fixing the state's $2.5 billion deficit, but the Legislature failed to agree on a plan to fill the gap with investment earnings from the $60 billion Permanent Fund — which will remain unspent in the fund's earnings reserve account.

Instead, for a third straight year, lawmakers will rely on the state's primary savings account, the Constitutional Budget Reserve, to cover the $2.5 billion gap between revenue and spending. That approach probably won't suffice for the following year, however, since the CBR balance is projected to drop below what the state would need to fill the deficit for the 2019 budget year.

Walker's action Friday, announced late in the afternoon, came a year after he held a news conference in Anchorage on what he called a "day of reckoning." He said then that he would use his line-item veto power to slash appropriations for Permanent Fund dividends, school construction and cash tax-credit payments to oil companies.

In a prepared statement this time, Walker thanked lawmakers for passing a budget in time to avert a government shutdown.

A shutdown would have begun July 1, the start of the new fiscal year, if the Legislature hadn't passed the appropriations bill last week.

But in a somber note, Walker recalled that S&P Global Ratings earlier this month warned it would likely downgrade Alaska's credit rating unless lawmakers adopted "structural fiscal reform in the 2017 legislative session." Walker has unsuccessfully pushed the Legislature to agree on deficit-reduction bills, like a restructuring of the Permanent Fund and a broad-based tax, for the past two years.

"The job is not complete. Without a complete fiscal plan in place, uncertainty looms over our economy. It's time to fix this problem for good to ensure a stable foundation for generations to come," Walker's statement quoted him as saying.

He added that a "compromise fiscal plan can be achieved in the coming weeks — if the Legislature is willing to engage." But lawmakers, who are currently convened in their second special session of the year, have shown few signs that they're close to reaching a deal.