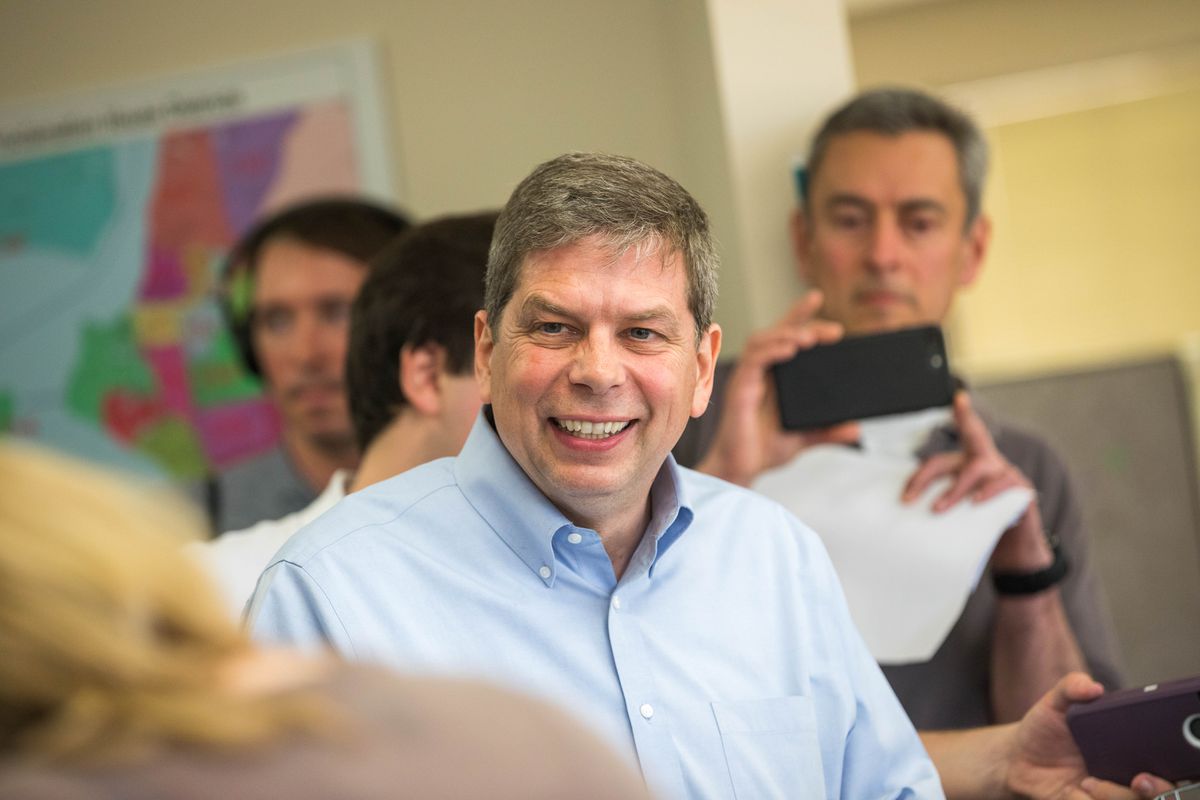 JUNEAU — Mark Begich is a star in Alaska Democratic politics, a former U.S. senator and mayor of the state's largest city, but his campaign for governor has some worried he's playing spoiler in the race and could hand control of the Last Frontier to Republicans.

The worries over an expected three-way race highlight the quirks of politics in this state, by far the biggest in the country by land mass but with a population about the same as Seattle. Partisan identification isn't as rigid here; the largest bloc of voters isn't affiliated with a party.

The governor's race is shaping up to be a race between Begich, independent Gov. Bill Walker and the eventual Republican nominee. Some Democrats and independents fear Begich and Walker will split the vote, giving the win to the Republicans — a fear that Democratic Party leaders are trying to calm.

Recently, Begich spent almost two hours explaining his decision to run for governor, laying out his plans and taking questions from an audience in a Juneau. The spoiler concern — which he had addressed at the start of his remarks — came up again. Begich said he never would have run if he didn't think he could win.

Geron Bruce, an independent, said Walker has done a great job. He told Begich: "I've been a supporter of yours for years. But I am not happy with you running for governor."

Walker, then a Republican, opted to bypass a GOP primary faceoff with then-Gov. Sean Parnell, who beat him four years earlier, and instead gather signatures to appear on the general election ballot. Byron Mallott, an Alaska Native leader, was the Democrats' gubernatorial nominee.

After labor unions refused to endorse Walker or Mallott, the two joined forces with the blessing of the state Democratic Party. Walker had to switch his party affiliation to undeclared as part of the deal. Mallott remained a Democrat and ran as Walker's lieutenant governor.

The Democratic Party later changed its rules to let independents run in its primaries, a move upheld earlier this year by the Alaska Supreme Court.

Around the start of the state Democratic convention in May, Walker's campaign announced that he and Mallott would run in the primary — Walker as an independent.

But when it became apparent that Begich would run, the campaign said Walker and Mallott would skip the primaries and gather signatures to go straight to the general election. Walker said that ensured he and Mallott would run together. In Alaska, the party primaries determine general-election pairings for governor and lieutenant governor. If you skip the primaries, you have a say in your running mate.

John-Henry Heckendorn, Walker's campaign manager, said Walker didn't want to go against Begich in a competition about who is the better Democrat.

"We want to compete with him in a competition about, who's got the strongest vision for Alaska," he said.

A three-way race "places people and organizations on different sides who are used to working together. And that is uncomfortable and that is more complicated," Heckendorn said.

Some Democrats and independents, who worry that a fight between Begich and Walker would create an opening for Republicans, voice concerns in particular about conservative former state Sen. Mike Dunleavy, seen as an early GOP favorite ahead of the Aug. 21 primary. Dunleavy has advocated for deeper cuts in response to Alaska's budget deficit and school choice. Former Lt. Gov. Mead Treadwell is also running as a Republican, jumping into the race just before the June 1 filing deadline.

Dunleavy's campaign manager, Brett Huber, said regardless of who is running, Dunleavy thinks he's on the right side of the issues.

The Democratic Party is backing Begich, the lone Democratic candidate. The party's executive director, Jay Parmley, said it's too early to speculate on how things could shake out.

"I just wish everybody would take a deep breath and let the process work out," he said.

"We have every opportunity to win a three-way race. Every opportunity. And to say Mark Begich being in the race somehow makes it harder is just wrong. That just doesn't bear out," Parmley said.

Begich, who often speaks of his experience as Anchorage mayor and of bipartisan relationships in the U.S. Senate, said Walker and legislators got so wrapped up in the budget and other "minutiae" that they lost sight of an overall vision for Alaska. Oil prices tanked after Walker took office, exploding Alaska's budget deficit. The state blew through billions of dollars in savings amid gridlock over how to address the deficit, deciding this year to use earnings from Alaska's oil-wealth fund to help plug a whittled-down hole.

"No one gets dealt a great hand in politics," Begich said in an interview, adding later: "Their issue was, can you make some decisions? The only way you do that, you have to take some things off the table and not be afraid to say, I will veto this."

Tom Sutton, a retired state employee, said he supports Begich. He voted for Walker in 2014 but said the governor let Republican lawmakers push him around.

Michelle Sydeman told Begich that she's undecided and wanted clarity on how he'd address the budget. She said she's supported Begich "forever," but Walker had shown "political courage" in doing what he thought was right.

Dunleavy has hammered Walker over the smaller yearly check that Alaskans receive from the oil-wealth fund. In 2016, Walker cut the size of the check in half, ignoring a formula in state law for calculating the checks. A court upheld his authority. Since then, lawmakers have ignored the formula, with some arguing this year that a full payout would be fiscally reckless. Dunleavy advocates paying a full dividend.

Begich said the anger he hears from Alaskans stems from not being part of the decision-making process. He supports putting a formula of some kind in the state constitution.

Monte Brice, a retired lawyer, said he's still listening. "I don't have to make up my mind until early fall," he said.