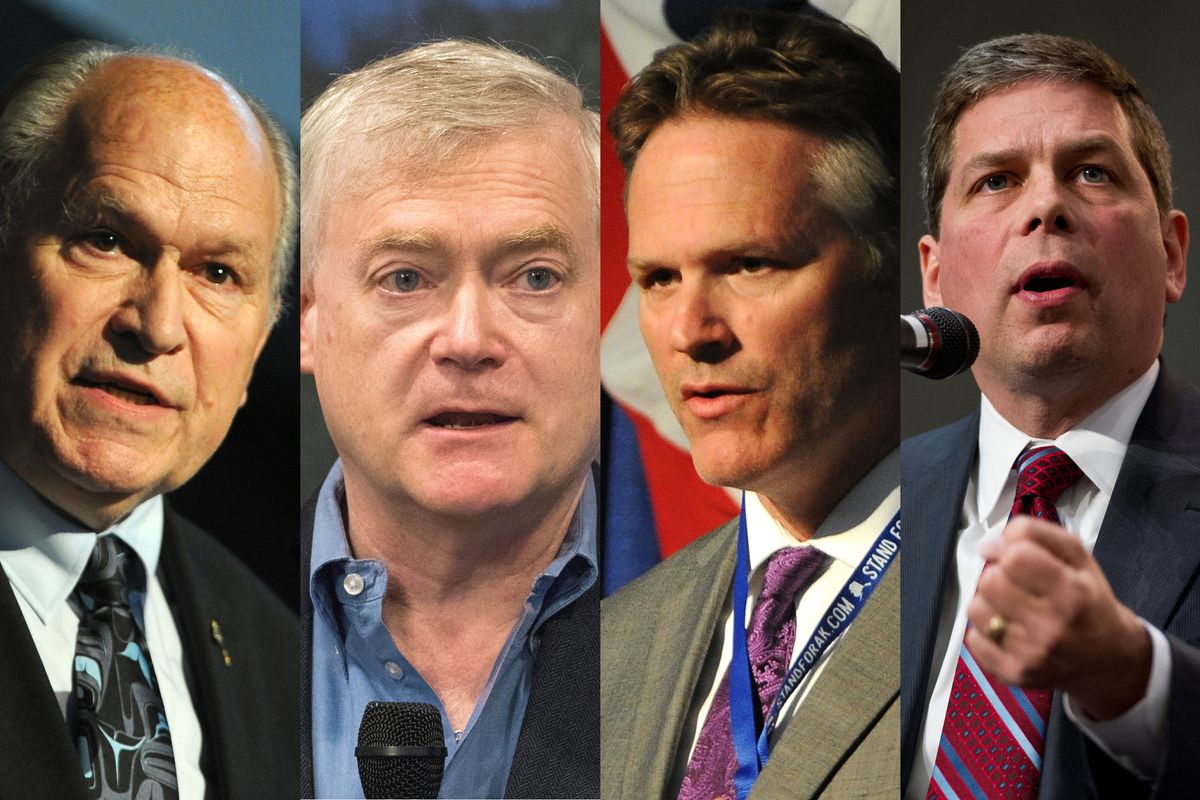 JUNEAU — Republicans Mike Dunleavy and Mead Treadwell are vying to become the third person in what is shaping up to be a three-way fight for governor in Alaska.

The winner of the Aug. 21 GOP primary will advance to the general election. Waiting will be Gov. Bill Walker, an independent who is not participating in a primary, and former U.S. Sen. Mark Begich, who is running unopposed on the Democratic side. Libertarian William "Billy" Toien also is running for governor.

When Begich joined the race in June, there was some handwringing among Democrats and independents who feared he and Walker would split the vote and hand the race to Republicans; Walker was elected in 2014 with Democratic support.

Voter turnout will be key for the Republican candidates, with crime, the economy and the future of the oil-wealth checks distributed annually to Alaska residents being big issues. Turnout in the 2016 primary was just 17 percent. It was 39 percent in 2014, a year that featured the governor's race and a closely watched U.S. Senate race.

Dunleavy and Treadwell are the highest-profile contenders in a GOP field crowded with other candidates who have raised little or no money. Dunleavy is a former educator and state senator who has gotten help from a third-party group in boosting his profile. Treadwell is a former chairman of the U.S. Arctic Research Commission who served as lieutenant governor under then-Gov. Sean Parnell from 2010-2014. Treadwell most recently worked for a private equity firm.

Dunleavy left the state Senate in January to focus on running for governor. During his five years as a senator, the fiery Wasilla conservative clashed with GOP leaders over limiting the size of Alaskans' oil-wealth checks, which he opposed, and over what he saw as insufficient cuts in response to Alaska's budget deficit.

Treadwell said he has a broader range of experience than Dunleavy and entered the race — late, like Begich — because he said people were dissatisfied with their options. He has sought to cast Dunleavy as a quitter who chose campaigning over staying in the Senate to fight cuts to Alaskans' oil-wealth fund checks and repeal a criminal justice overhaul that critics said was soft on crime.

Dunleavy said he understands government and the legislative process. He said he spoke with people in his district about hanging on for his last year or letting someone serve who could give their undivided attention to the district. The response was overwhelming, he said.

"The deal is, when you stay in office and you're running for a campaign, anything you do, it's difficult for folks to separate that," he said. "If I were to stand up on the floor and make a statement, folks would say, 'well, that's because he's running for governor.'"

State GOP Chairman Tuckerman Babcock said he's confident primary voters will pick the strongest candidate and the party will unite behind its nominee.

Mike Miller, CEO of the Santa Claus House in North Pole and a former state legislator, gave the maximum he could — $500 — to Treadwell's campaign. He calls Treadwell an old friend who whom he's philosophically aligned on economic issues.

But he said he's a conservative and would support Dunleavy, given his other options, should Dunleavy beat Treadwell.

Amy Demboski, a radio host and member of the Anchorage Assembly, called Treadwell a "brilliant" man and great candidate. But she said Dunleavy is "the right man at the right time."

"When you look at the environment we live in today, I think Alaskans are pretty tired of establishment kind of candidates," she said. "I think people are looking for someone who can connect with them, who understands the issues and does what they say."

Both Dunleavy and Treadwell are critical of the 2016 criminal justice overhaul that was aimed at addressing high rates of recidivism, a growing prison population and other problems. Both say people have lost faith in the law, which since its passage has been tweaked in response to public outcry.

Both say the budget needs to be looked at more critically.

Dunleavy sees room for more reductions and efficiencies, noting that while in the Senate he pitched consolidation of insurance for school districts as a way to save money. He wants to limit budget growth and prioritize where money is spent.

Treadwell said a serious discussion is needed on entitlements and education, a regular source of debate at the Capitol with some arguing that schools need more money. Others have been reluctant to put more money toward a system they see as broken.

Treadwell said he wants to look at the possibility of a constitutional amendment that would limit spending to revenues collected during the prior year, rather than base it on oil price and production forecasts, and look at privatizing assets.

He said Walker lost credibility with Republican lawmakers by pushing taxes to help fill a budget deficit that exploded after oil prices went into a freefall in 2014.

Walker allies in the House last year passed an income tax that was quickly rejected by the GOP-led Senate. The state burned through billions of dollars in savings amid gridlock over how best to resolve the deficit before lawmakers this year agreed to plug much of the hole with earnings from the state's oil-wealth fund, the Alaska Permanent Fund. Alaska has no state sales or personal income tax.

Harold Heinze of Anchorage supported Walker in 2014, liking in particular his vision for bringing a long-hoped-for gas pipeline project to fruition. But he said Walker has had "far too heavy a Democratic flavor" to other actions he's taken.

Walker's lieutenant governor, Byron Mallott, is a Democrat, and the two pride themselves on having what they call a bipartisan administration.

Heinze is backing Treadwell, whom he has known for years and thinks will put a focus on the state's economy. The two once worked under former Gov. Wally Hickel.

Dunleavy has criticized Walker's decision to halve the size of Alaskans' permanent fund checks in 2016, an action ultimately upheld by the state Supreme Court as within Walker's authority.

The formula in state law for calculating the dividend has not been followed by lawmakers since, with some arguing that a full payout this year would have been fiscally reckless.

Dunleavy said Alaskans need to be involved in any potential change to the dividend formula to restore trust in the process, including weighing in via an advisory vote. Both he and Treadwell have supported protecting the dividend.