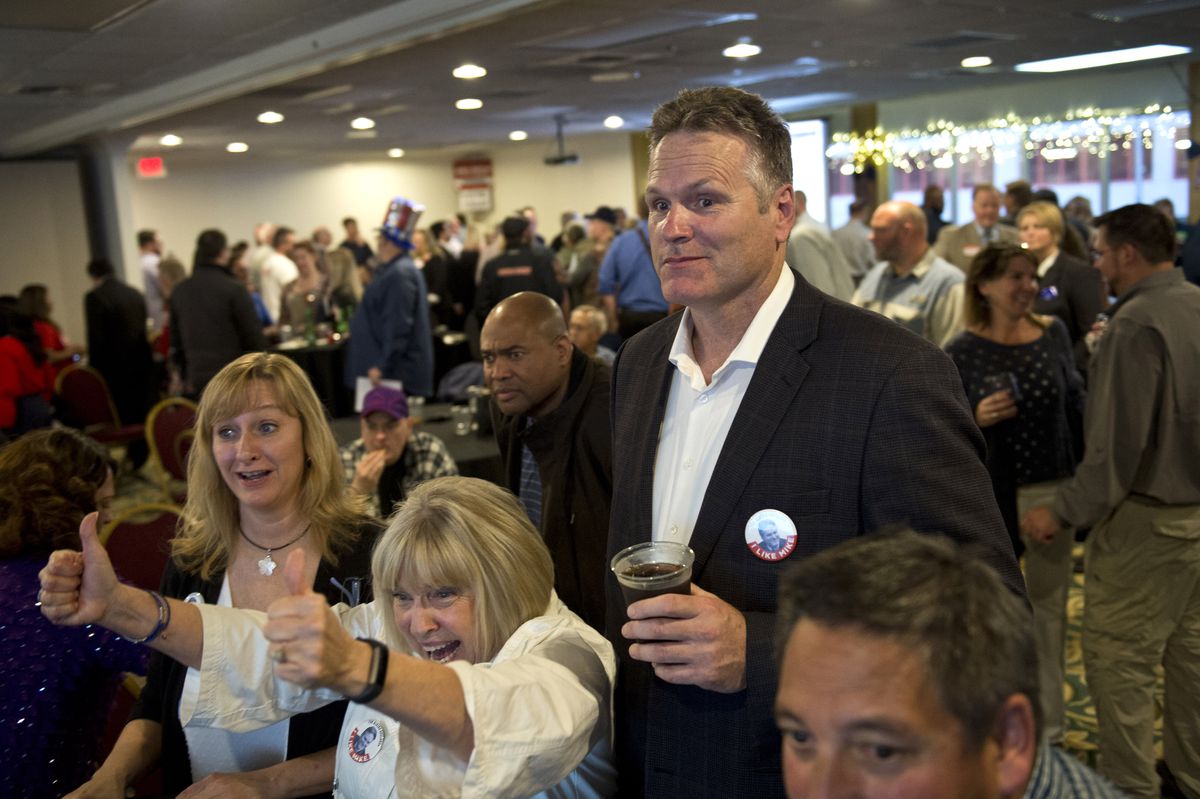 His victory sets up a three-way race in November's general election, with Dunleavy facing incumbent Gov. Bill Walker, who is running as an independent, and former U.S. Sen Mark Begich, a Democrat.

Dunleavy claimed victory shortly after 11 p.m. at a downtown Anchorage hotel, where the Alaska Republican Party held its watch party and where he had watched the results come in most of the night. Dunleavy thanked his supporters, his campaign staff, the other GOP candidates and his wife. He said he would work to build trust among those who didn't vote for him.

"This is a Republican state and we need to take back this governorship," he said as the crowd cheered. "By working together, we can make it happen."

Meanwhile, state Sen. Kevin Meyer of Anchorage appeared on his way to winning the Republican primary race for lieutenant governor.

In an interview, Dunleavy said he planned to celebrate his primary win by going home to Wasilla with his wife, Rose, and feeding their three dogs, Mr. Tito, Blue and Olive. On Wednesday, he said, the next race begins.

Tuckerman Babcock, chairman of the Alaska Republican Party, said Tuesday's results signal that the party is behind Dunleavy.

"This is a remarkable margin," he said.

Treadwell, in congratulating Dunleavy, also expressed disappointment in the lack of attention on the primary campaigns.

"We have to bring the Republican Party together because right now the ideas that we brought forward on trying to save jobs, build jobs in this economy, having experienced people run this thing, we did not get very much attention. The biggest issue was who was tallest."

Mead Treadwell: “I want to congratulate Mike on his apparent victory.”#AkElect pic.twitter.com/ERmnI5g5N8

During their campaigns, Dunleavy and Treadwell agreed on a range of issues. Both are pro-life conservatives. Both have said they want to protect Alaskans' annual Permanent Fund dividend checks.

With political experience and significant campaign funding, the two had emerged as front-runners in a Republican primary alongside five other candidates. Dunleavy got into the race much earlier than Treadwell, who filed to run at the last moment in June.

While Dunleavy was the top money-raiser among Republican candidates, donations to his campaign are just part of the picture. He also has benefited from $760,000 — including $16,500 in the past week — pouring into an independent expenditure group fueled largely by Dunleavy's brother and also sportfishing advocate and developer Bob Penney.

Third-party groups can spend an unlimited amount in Alaska campaigns. A group formed to support Treadwell has raised about $60,000, including $7,500 in the past week.

"I ran against essentially a self-funded candidate and our campaign finance laws basically make it very, very hard. This was checkbook deterrence," he said. "I want to congratulate Mike on his apparent victory."

Asked if he was conceding, Treadwell did not say yes.

"What does a concession mean?" he said. "I would like to congratulate whoever won this election, and if it's Mike, congratulations."

Campaign season spending pales in comparison to the last governor's race in 2014, when a three-person fight for the Republican nod for U.S. Senate and a controversial ballot measure on oil taxes fueled a flurry of advertising.

That year, primary election turnout was about 39 percent. This year, that number figures to be far lower — if only because the number of registered voters has grown to include people who applied for Permanent Fund dividends but who do not normally cast ballots.

The general election is Nov. 6.