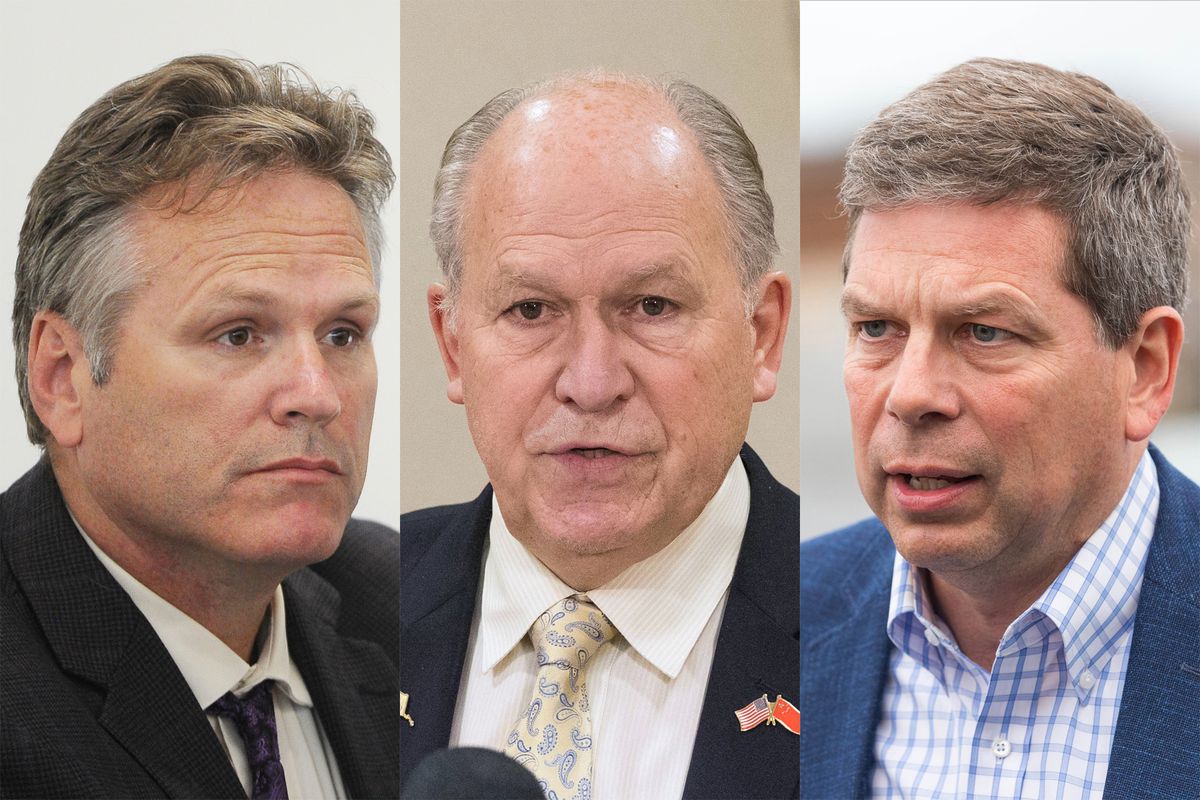 The primary election is over, and Alaska is on its way to a three-way race for governor with Democrat Mark Begich, Republican Mike Dunleavy and the incumbent Gov. Bill Walker, an independent, battling for the state's top political office.

Now that the roster is set — with both Begich and Walker insisting they have no plans to drop out of the race — the candidates will be looking to label themselves and their opponents ahead of November's general election, drawing distinctions and pushing their platforms. They'll also be fighting for endorsements, votes and money to fuel their campaigns.

Begich, a former U.S. senator and Anchorage mayor, and Dunleavy, a former state senator, both have support from their political parties. Walker is again running independent of a party.

Having Begich and Walker — who defeated Republican Gov. Sean Parnell by teaming up with a Democratic running mate in 2014 — on the crowded ballot has some worried about the two candidates splitting the vote. Walker's boosters recently launched an online petition to pressure Begich out of the race. But with the election fewer than 80 days away, Begich, Dunleavy and Walker all said this week their campaigns are plowing forward.

Former Alaska Republican Party chairman Randy Ruedrich described the upcoming November race as a unique situation for Democrats in red-state Alaska. He said he didn't believe either political party had enough voters to have a "significant additional candidate on the ticket" in the governor's race.

"They have an incumbent governor that is kind of a Democrat," he said at an election-night party for former Lt. Gov. Mead Treadwell, who lost in the Republican primary to Dunleavy. "And they have a recently defeated U.S. senator who for some strange reason wants to go to Juneau."

In the 2014 race, Walker switched his party affiliation from Republican to undeclared and partnered with now-Lt. Gov. Byron Mallott, a Democrat, on a "unity" ticket.

In an interview Wednesday, Jay Parmley, executive director of the Alaska Democratic Party, said the way he sees it, Alaska has a strong base of Democrats, a strong base of Republicans and then a big chunk of nonpartisan and undeclared voters that both parties try to capture.

"We're always sort of fighting over the people registered independent, but who would vote either way," he said. "I don't think they lean Republican or lean Democrat, some probably go back and forth between elections."

Since June, concerns from Democrats over a three-way race have lessened as Begich's campaign ramped up and he talked to voters, "reminding them that he shares their values," Parmley said.

Before Walker, Alaska's last three governors were Republicans — Parnell, Sarah Palin and Frank Murkowski. Before that, Tony Knowles, a Democrat, held the office.

As things stand, both Walker and Begich are set on staying in the race. Another candidate, Libertarian William "Billy" Toien, is also running for governor.

Specifically, he mentioned plans to tackle crime in Alaska and improve education. Begich's campaign manager, Nora Morse, said Wednesday that Begich has no intention of dropping out of the race.

On Monday, Walker said he would "absolutely" appear on the Nov. 6 ballot. He said he hadn't faced much pressure to drop out, aside from a proposal from former state Sen. Hollis French last month, which he rejected. He said he and Mallott have remained focused on their jobs and campaigning.

"The ultimate poll, of course, will be taken on Election Day," he said.

Dunleavy won the Republican primary nomination Tuesday with a clear win over his closest competitor, Treadwell. At the Aviator Hotel Anchorage in downtown, where he declared victory, he said that he expects the dynamics of this election to be different from a "usual" race.

"In some ways, it's really two Democrats and a Republican, from our perspective, in terms of philosophy and approach to government," he said.

On challenging the incumbent Walker, he said: "One doesn't want to be arrogant or overthink it but, if you have a game plan, you run for your game plan."

A three-way race isn't so unusual in Alaska, Walker said, and that shouldn't be forgotten.

Some examples from past races for governor: Jay Hammond, a Republican, beat multiple opponents in 1978. In 1990, Wally Hickel, a Republican running on the Alaskan Independence Party ticket, defeated Democrat and Republican rivals. In both elections, Hammond and Hickel each won with about 39 percent of the vote.

[Parnell vs. Walker vs. Mallott: Just another 3-person race]

One thing to keep an eye on over the next few months is the fundraising battle. In addition to voters' donations to individual candidates, which are capped at $500, independent expenditure groups created to help or hurt a candidate can tip the scales.

Unlike candidates, the groups can raise unlimited amounts of money from individuals and corporations, opening the possibility for them to spend big to influence the election. The caveat: The groups cannot coordinate with campaigns.

So far, independent expenditure groups have formed in support of Dunleavy and Walker.

The group Dunleavy for Alaska raised $760,000 during the Republican primary election — twice as much as the candidate raised — ahead of Dunleavy's victory over Treadwell.

Barbara Donatelli, senior vice president of the Anchorage-based Alaska Native corporation Cook Inlet Region Inc., is co-chair of the group supporting Walker called Unite Alaska. She said she's concerned that having both Walker and Begich in the race could mean a win for Dunleavy.

Donatelli signed on to a letter earlier this summer urging Begich to drop out of the race. The letter originated from a conversation in late June among a group of Native leaders at an event for the re-election of Walker and Mallott, according to an email from Don Gray, a former chair of the Alaska Democratic Party.

The letter circulated by email and once it got 100 signatures, it was launched as an online petition, Gray said. He posted the petition on MoveOn.org last week. As of Wednesday, the petition had nearly 400 signatures, according to the MoveOn page.

On Tuesday, outside an election event in Midtown Anchorage, Begich called the petition a "stunt by the Walker campaign."

"These political stunts are things that people are fed up with and tired of," Begich said.

Parmley also called the petition a "stunt" and said he did not believe it carried any weight.

Walker said the petition wasn't generated by his campaign, and he wasn't encouraging people to sign it.

"People can do whatever they're most comfortable with," he said.

The last day a candidate can withdraw from the general election race is Sept. 4.

Note: This story has been updated to clarify Randy Ruedrich's thoughts on the three-way election.