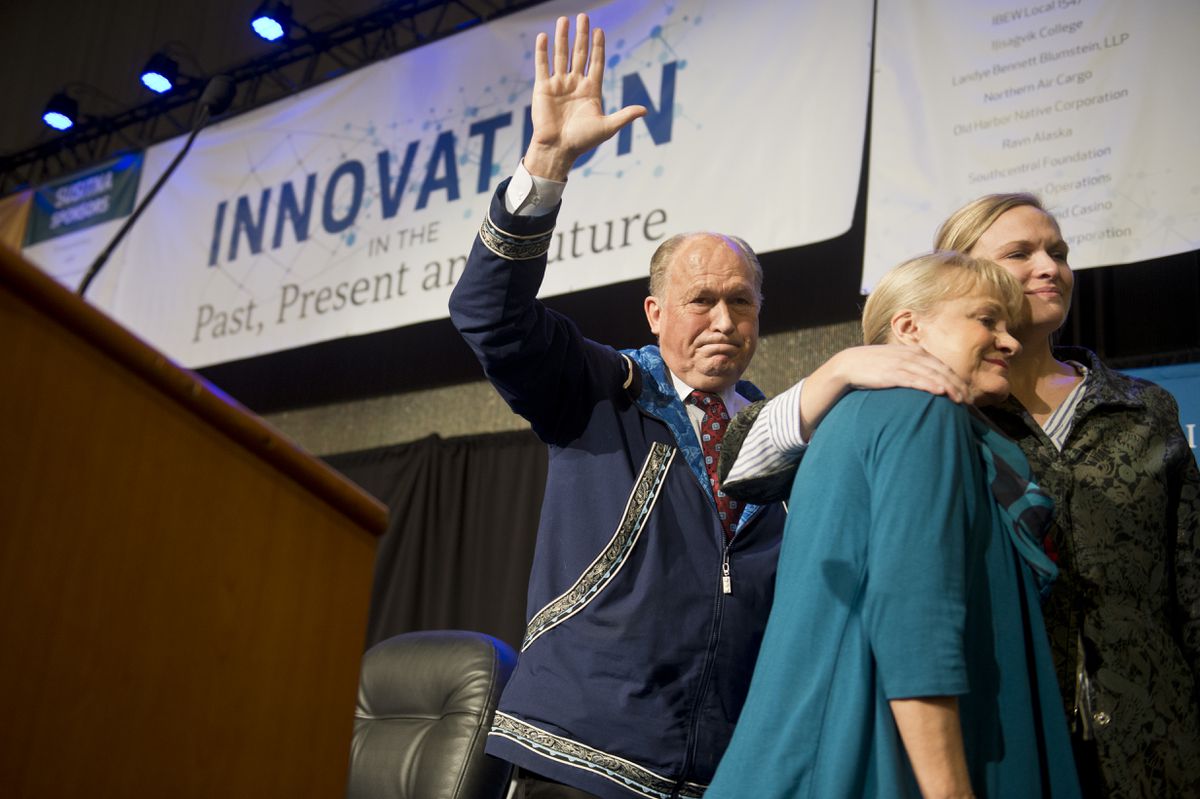 Gov. Bill Walker after announcing he was  suspending his campaign for election at the Alaska Federation of Natives annual convention on October 19, 2018. (Marc Lester / ADN)

Gov. Bill Walker after announcing he was  suspending his campaign for election at the Alaska Federation of Natives annual convention on October 19, 2018. (Marc Lester / ADN)

Walker, elected as an independent, made the surprise announcement at the Alaska Federation of Natives annual convention, three days after former Lt. Gov. Byron Mallott abruptly stepped down from both his office and the re-election campaign over unspecified "inappropriate comments" he made to a woman.

With less than three weeks until Election Day and with more than 23,000 absentee ballots already mailed to voters, Walker's decision to step away from his campaign marks a significant, last-minute change in the battle to become Alaska's next governor.

The three-way race has now become a two-way fight between Begich, a former U.S. senator, and Dunleavy, a former state senator. How this complicates voting is not yet completely clear. Some Alaskans have already sent in their voted ballots.

Walker, the only governor in America currently in office who wasn't elected as a Republican or Democrat, had been scheduled to attend a candidate forum at the AFN convention Friday afternoon with his competitors Begich and Dunleavy.

Instead, he went on the stage at the Dena'ina Civic and Convention Center — before the forum started — and told a crowd of hundreds from across the state: "Every decision I have made as your governor, I have made on the basis of what I believe is best for Alaska. With that said, effective today, I am suspending my campaign for the re-election as governor."

There were gasps and shouts from the audience.

An emotional Walker, in a blue kuspuk, said that with only 18 days until the election, "it has become clear, we cannot win a three-way race." This week, he said, he talked to "many, many, many Alaskans" about who had a better chance of competing against Dunleavy.

"The determination was made that, at this point, Begich has the better odds," Walker said.

Both Begich and Dunleavy were in the crowd watching, along with their families and campaign staff.

Dunleavy watched the speech intently, leaned forward, showing no reaction. He stood during a standing ovation when Walker introduced his wife, First Lady Donna Walker. He remained seated at the end of the speech as the crowd gave Walker an ovation.

Soon after Walker's announcement, Dunleavy told the Daily News that he will still win the election.

His team plans to forge ahead, he said.

"Governor Walker could have chosen a dignified, graceful exit to his campaign," Dunleavy campaign manager Brett Huber said in the statement. "Instead, he opted to bow out with a bitter, partisan attack on Mike Dunleavy. It's too bad — Alaskans deserve better."

Walker, a Republican-turned-independent, was elected in 2014 on a so-called unity ticket with Mallott, a Democrat, and defeated incumbent Republican Sean Parnell.

Election Day is Nov. 6 and early voting starts Monday. The Walker-Mallott ticket will remain on the ballots, which have already been certified and printed, according to the Alaska Division of Elections.

More than that: The division has already sent out more than 23,000 absentee ballots, and Alaskans have voted and returned just over 3,000 of them, according to the division.

It's unclear what Walker's withdrawal from the race means for the election process.

Samantha Miller, division spokeswoman, said she did not yet have information Friday about the implications of Walker's dropping out on voting, including what it means for Alaskans who may have already sent in their absentee ballots and voted for the Walker-Mallott ticket.

"We're still processing through everything and we'll have more information available on Monday," she said

In his speech at AFN, Walker talked up Begich as being better in sync with him than Dunleavy.

"On balance, it is my belief that despite my many differences with Mark Begich, his stance on important issues that I have listed are more closely aligned with my priorities for Alaska," Walker said, citing his support of Medicaid expansion, pursuit of an Alaska natural gas pipeline project and state spending on rural Alaska and education.

"It is the honor of my life to have served as the governor of this great state," he said.

Many Walker staff and campaign members stood together near the stage, some with tears in their eyes, as he spoke. Before and after his speech, they hugged each other.

"That was sad," said a woman in the crowd. "Wasn't expecting that," one man said. People in the audience were tearful.

Walker's family joined him during his speech. The crowd clapped and cheered as they made their way off stage, where Walker was met with hugs. Shortly after, the governor and his family returned to the stage, and Alaska Native groups from various regions sang for Walker. Many gathered on stage to thank him.

Walker: 'There was no deal'

Reporters followed Walker out of the ballroom after his speech, into a busy Dena'ina Center hallway for a makeshift press conference. Conversations he has had with Begich had "something to do with" his decision to bow out of the race, Walker told reporters.

"Because I wanted to know where he stood on certain issues," Walker said. "I wouldn't have done it just on my own without some discussions."

He and Begich talked this week about the pros and cons of a three-way race versus a two-way race, Walker said. When asked if Begich promised him anything, Walker said no.

"No, there was no deal or such, anything like that," Walker said. He also said there have been "no discussions" of him having a place in a Begich administration.

Walker hadn't been considering withdrawing from the race for very long, he said.

"Really no decision was made, really, quite honestly until last night," he said.

Asked if Mallott's resignation had anything to do with the decision to drop out, Walker said there have been a lot of difficult decisions he's had to make.

"I can't say any one issue," he said. "It's been a tough week though, certainly has."

While there are a lot of things he disagrees with Begich about, Walker said, he'd still be better for Alaska than Dunleavy.

"I think Alaska is going to be hurt if (Dunleavy) is successful," he said.

After Walker's announcement, U.S. Rep. Don Young and his Democrat challenger, Alyse Galvin, debated. Then Begich and Dunleavy faced off in their first one-on-one debate. Aside from Walker's absence, the forum did not stray significantly from what Alaskans have seen from the candidates. Just Begich brought up that Walker had dropped out the race.

"I do want to acknowledge the amazing, courageous action that the governor did," Begich said. "He was about Alaska."

After the debate, Begich and Dunleavy stayed near the stage, separately posing for photographs and talking to those who attended.

As Begich walked out of the Dena'ina Center and to his car, people stopped him to shake hands and hug. Some just called out: "You got my vote" and "I believe in you" and "good luck."

Begich told reporters there had been no deals or agreements between him and Walker. Asked about whether Walker would have a spot in his campaign or in his administration, if elected, Begich said just two hours had passed since the candidate dropped out.

"I don't know if that's on the docket, but I will just say that he's been unbelievably gracious in his action," Begich said.

"We'll see where it all goes now," he said. "Eighteen days."