Analysis: Why did Alaska’s governor abruptly drop out of the race? 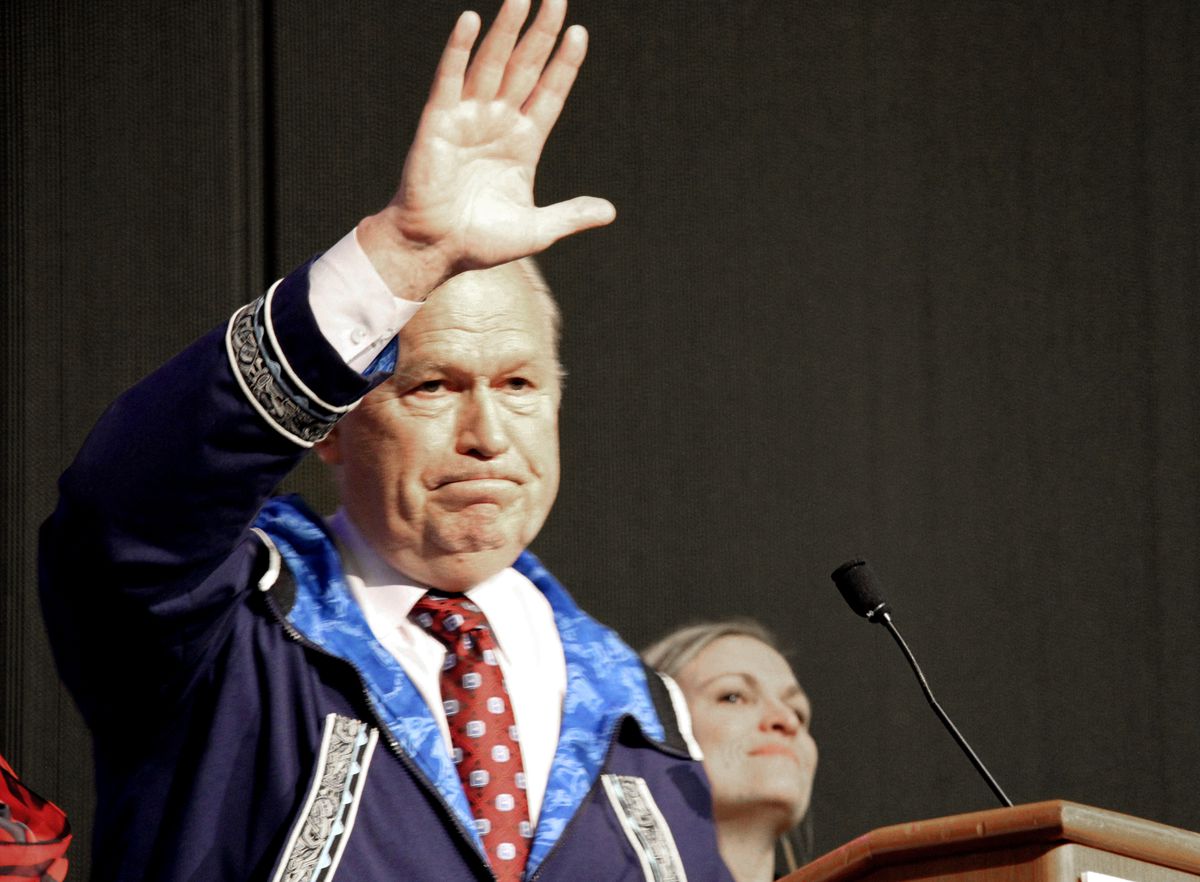 Alaska Gov. Bill Walker waves as he announces he will drop his re-election bid while addressing the Alaska Federation of Natives conference Friday, Oct. 19, 2018, in Anchorage, Alaska. Walker's re-election plans were dealt a blow earlier in the week after his running mate, Lt. Gov. Byron Mallott, resigned after making an inappropriate overture toward a woman. (AP Photo/Mark Thiessen)

Alaska Gov. Bill Walker waves as he announces he will drop his re-election bid while addressing the Alaska Federation of Natives conference Friday, Oct. 19, 2018, in Anchorage, Alaska. Walker's re-election plans were dealt a blow earlier in the week after his running mate, Lt. Gov. Byron Mallott, resigned after making an inappropriate overture toward a woman. (AP Photo/Mark Thiessen)

There are just 2½ weeks until Election Day, and it was an election Gov. Bill Walker, an independent, looked likely to lose. Instead, on Friday, he abruptly ended his campaign and threw his support to the Democrat in the race, Mark Begich.

It's a weird move that isn't fully explained by his statement that he realized he couldn't win. Walker's campaign had been behind much of this election cycle, and he suspended it so late in this election that his name will still be on the ballot. And his decision comes days after his lieutenant governor resigned over still-mysterious circumstances related to "inappropriate comments" to a woman.

So what's going on? Insiders who spoke to The Washington Post aren't entirely clear, but here's a look at some significant moments that could give us clues to why Alaska's governor suspended his campaign at the last minute.

- He’s been one of the most vulnerable governors all election cycle: Walker is the only independent governor in the country, and unseating him has been Republicans' top priority. Meanwhile, this race was never much on Democrats' radar. (They have plenty of more likely pickup opportunities in the Lower 48.)

In The Post’s most recent rankings of the top 10 governorships most likely to flip in the midterm elections, Walker is No. 2 out of 10. He’s unpopular, he’s leading a state with high unemployment, and as The Post’s David Weigel reports, as part of an effort to launch the state out of a recession, he made cuts to yearly checks sent to all Alaskans. Cutting those checks was a move one Democratic operative described as the death knell for Walker’s popularity.

- The Republican looked set to win: And it’s possible Walker wanted to thwart that, even at the expense of his campaign. Walker has more in common with Republicans than Democrats, but Mike Dunleavy, a former state senator, is further to the right than Walker.

Walker’s re-election hopes against Dunleavy got even fainter when Democrat Mark Begich, a former senator and mayor of Anchorage, got into the race. Polling showed Dunleavy leading each candidate by double digits. A recent Alaska Survey Research poll found Dunleavy with 43 percent of the vote and Begich and Walker splitting the rest of it, with about 26 percent each. So it stands to reason that if you combined their two votes entirely, Begich could have enough to win.

- He has a history of last-minute change-ups in his election: Though none as last-minute as this, as Walker was still in the race when nearly 2,000 absentee ballots were recently mailed out.

But in 2014 he started out running as a Republican, then switched to independent, then persuaded his Democratic opponent, Byron Mallott, to join his campaign as lieutenant governor. Walker and Mallott barely won that election.

But as the Anchorage Daily News reports, it was difficult to near-impossible for Walker to fully detach himself from the lieutenant governor just three weeks before Election Day: Mallott’s name is on Walker campaign materials, signs across the state and on the ballot.

It’s not entirely clear why Walker left, but it is clear that a number of things in the past few weeks haven’t gone his way. And the state of the race gets slightly more competitive for Democrats as a result, but Republicans still have the upper hand, just as they did before Walker suddenly dropped out.