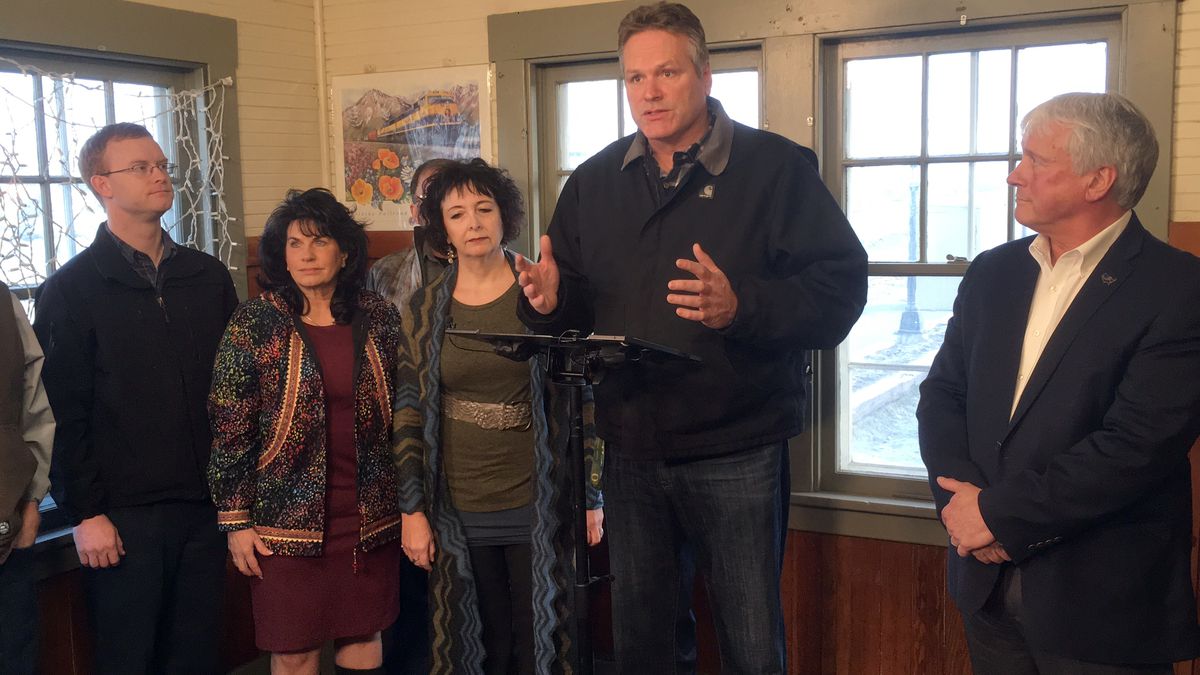 Gov.-elect Mike Dunleavy introduces John MacKinnon, right, as his commissioner for the Alaska Department of Transportation and Public Facilities on Wednesday in the Wasilla railroad depot. Dunleavy and MacKinnon were accompanied by members of the Matanuska-Susitna Borough's delegation to the Alaska Legislature. From left are Rep. David Eastman, R-Wasilla, Rep. Cathy Tilton, R-Wasilla, and Sen. Shelley Hughes, R-Palmer. (James Brooks / ADN)

Gov.-elect Mike Dunleavy introduces John MacKinnon, right, as his commissioner for the Alaska Department of Transportation and Public Facilities on Wednesday in the Wasilla railroad depot. Dunleavy and MacKinnon were accompanied by members of the Matanuska-Susitna Borough's delegation to the Alaska Legislature. From left are Rep. David Eastman, R-Wasilla, Rep. Cathy Tilton, R-Wasilla, and Sen. Shelley Hughes, R-Palmer. (James Brooks / ADN)

WASILLA — Accompanied by much of the Matanuska-Susitna Borough’s delegation to the Alaska Legislature, Gov.-elect Mike Dunleavy on Wednesday named John MacKinnon, head of the Associated General Contractors of Alaska, as his new commissioner for the Alaska Department of Transportation and Public Facilities.

“I think his experience, his focus, on what we need to accomplish in the state of Alaska is going to get us some great transportation systems in place, improve what we have and help grow Alaska,” Dunleavy said of MacKinnon.

MacKinnon, like all commissioners, is subject to legislative confirmation. He will serve on an interim basis starting Dec. 3 — when Dunleavy, a Republican, will be sworn in — until he is confirmed.

Before joining AGC, MacKinnon served as deputy commissioner of DOT between 2003 and 2008.

“I expect a short learning curve to get back into the swing of things there,” MacKinnon said.

MacKinnon has deep ties to the City and Borough of Juneau, including work on the local elected assembly and planning commission.

The governor-elect’s announcement took place in the offices of the Wasilla Chamber of Commerce, which occupies the historic Wasilla railroad depot near the intersection of the Parks Highway and Knik-Goose Bay Road.

Dunleavy said he chose that location for a reason.

“KGB is a road that’s been pretty dangerous. It’s really a life safety issue,” he said, adding that he intends to make improvements a priority under his administration.

Both men were asked about the Knik Arm Crossing.

“It’s going to have to fit into the fiscal realities that we’re dealing with. The project is not dead. It’s something we’re going to continue to study and take a look at,” Dunleavy said.

MacKinnon spoke about the Knik Arm bridge in the context of several major construction projects suspended or canceled by Gov. Bill Walker for budgetary reasons. Those include the Susitna-Watana Hydroelectric Project and Juneau Access, the effort to bring Juneau’s road network closer to Skagway and shorten the ferry ride between those two cities..

“My understanding is the door wasn’t shut and latched. They were put into a dormant mode where they could be reactivated,” MacKinnon said.

MacKinnon’s family owns land north of Juneau that would benefit from the last Juneau Access plan.

According to state records, MacKinnon owns 13.9 percent of Hyak Mining Co., which holds mining claims north of Juneau. Those claims are leased to Coeur Alaska, the operator of the Kensington Gold Mine.

When asked about that potential conflict of interest, MacKinnon said he would recuse himself from work on Juneau Access, just as he did during his time as deputy commissioner.

DOT is preparing to bring two new Alaska-class ferries into service this year and is planning a new oceangoing Tustumena-class ferry. Asked about his plans for the Alaska Marine Highway, MacKinnon said he needs to get up to speed first.

“I don’t have any plans at this point. I’ve got to see what the status of it is,” MacKinnon said.

An additional announcement is expected from the Dunleavy transition team next week.