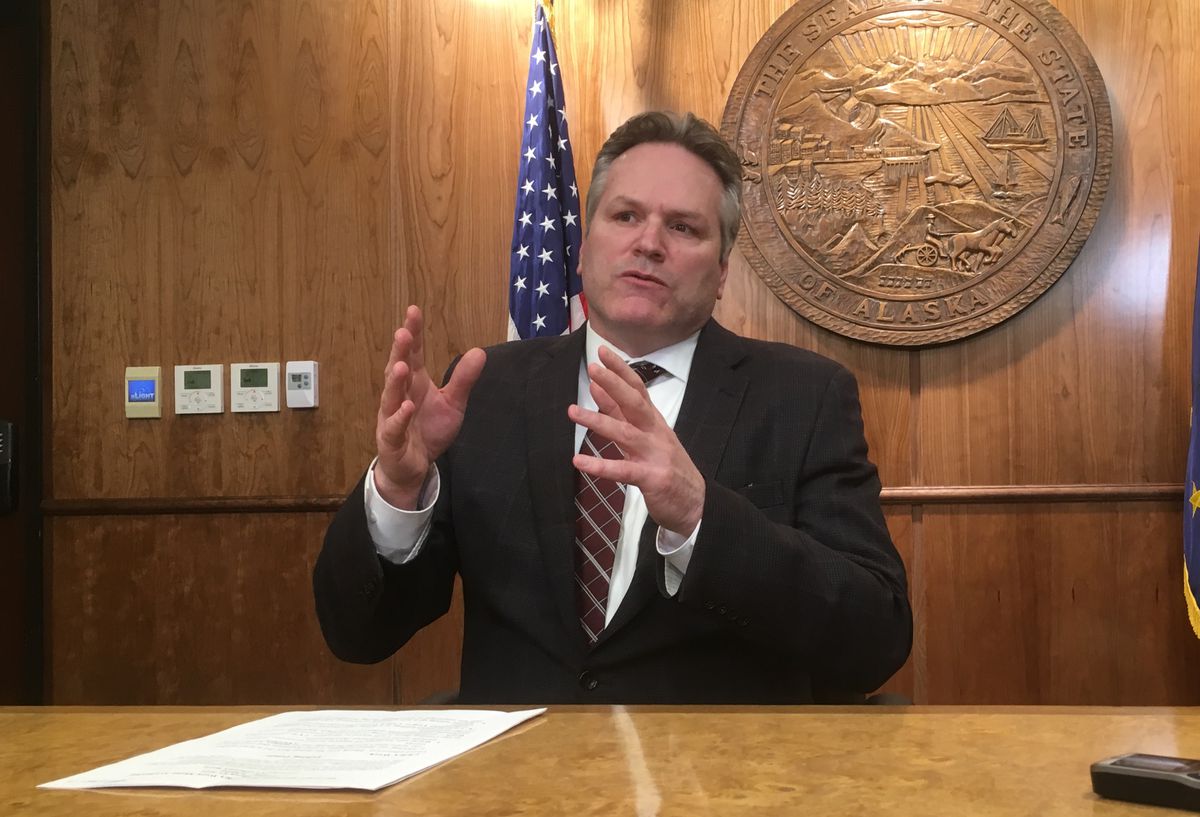 JUNEAU — A day after Gov. Mike Dunleavy announced he will hold a series of public meetings across Alaska to discuss his budget proposal and long-term fiscal plan, ticketing arrangements reveal the meetings are being sponsored and managed by the conservative-libertarian group Americans for Prosperity.

That sponsorship was not disclosed when the governor said he would hold public meetings in Anchorage, Nome, the Matanuska-Susitna Borough, Kenai and Fairbanks next week.

“They are open to the public, absolutely,” he said.

Dunleavy press secretary Matt Shuckerow agreed with McKee, adding in an emailed statement that the administration “partnered with AFP-Alaska and the Alaska Policy Forum to assist in hosting, organizing, coordinating these events.”

That partnership was not previously disclosed, nor were AFP-imposed entry requirements to what the governor’s office calls a public event.

AFP is requiring preregistration and ID checks at the door. According to the rules on the ticketing pages, no signs or political statements are allowed, the general public cannot “record, reproduce or transmit” any portion of the event without permission, and AFP may remove anyone from the event at any time.

McKee said that last clause is intended to allow AFP to remove someone who is being “rambunctious”.

“If people want to protest outside or want to shout support for certain things, they’re more than welcome to do that,” McKee said.

He said tickets are being provided to those who register online first, and none are being reserved for certain individuals or groups.

The events’ web pages were offline Tuesday evening after the initial publication of this story. McKee said he was unaware and would talk with AFP’s IT staff.

The events will be “a series of community focused discussions and meetings to outline a permanent fiscal plan for Alaska, including the vision behind his FY2020 budget proposal and a package of constitutional amendments meant to address the state’s long-term fiscal stability,” the governor’s announcement said Tuesday.

“Join Americans for Prosperity-Alaska as they host guest speakers and a panel discussion on why Alaska must face its fiscal reality and implement reforms to curb government’s habit of overspending,” states the ticketing page for the governor’s events.

The dissonance between the governor’s announcement and the apparent reality of the meetings has upset some Alaskans.

Vince Beltrami, president of the Alaska AFL-CIO and a vocal critic of the governor’s budget proposal, said “It’s clear proof that the governor’s cozying up to corporate interests, inviting them in to profitize Alaska while our economy goes down the toilet and we’re on the precipice of losing 15,000 to 20,000 jobs in this state."

Americans for Prosperity was founded in 2004 by the billionaire Koch brothers and has supported libertarian-conservative policies through state chapters across the United States. McKee said the Alaska chapter is made up entirely of Alaskans and the Kochs “are not looking at Alaska.”

“We make our own priorities and run our own show here,” McKee said.

Joe Geldhof is a Juneau attorney and moderate Republican who supported Mitt Romney, served on Gov. Bill Walker’s transition team and sued the Walker administration for allegedly violating the state constitution. He said even if the sponsorship is innocent, it isn’t a good look for Dunleavy.

He compared it to a hypothetical golfing foursome featuring the governor and the heads of BP, Exxon and ConocoPhillips.

“They might talk about more than their golf scores. It just looks bad,” Geldhof said.

“I don’t know what they’re thinking. Do they think they might not have the support?” she said.

According to McKee, each of the Americans for Prosperity-sponsored events has space for about 150-200 people.

McKee said AFP had considered renting Anchorage’s Dena’ina Center for a larger meeting but were quoted a price of $10,000. That’s roughly equivalent to AFP’s sponsorship of all of the governor’s events statewide, he said, and wasn’t affordable.

McKee said he hopes AFP’s example will be followed by other groups across the state.

Shuckerow, by email, said next week’s events are the “first of many community-based discussions that will take place over the coming months.”