In letter, Alaska governor asks Trump for help on oil, mining and other issues 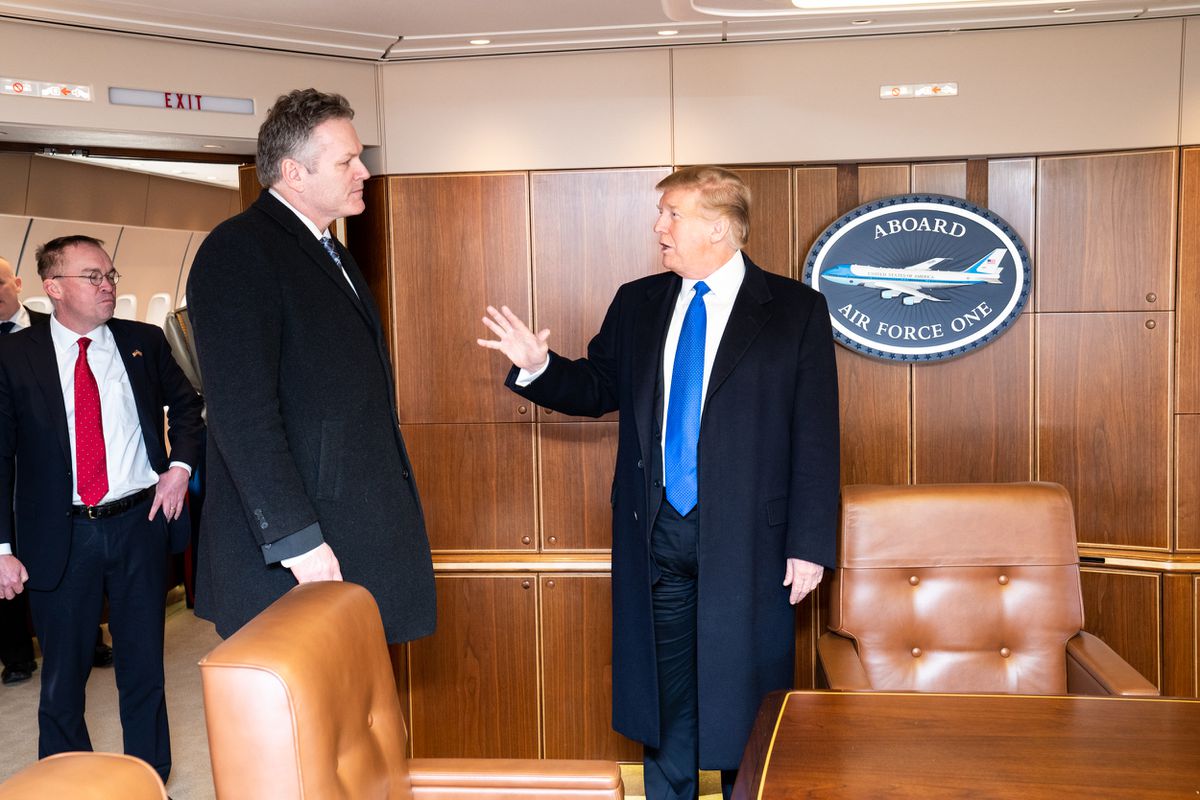 Gov. Mike Dunleavy meets with President Trump aboard Air Force One during a stop at Joint Base Elmendorf-Richardson, Feb. 28, 2019 (Photo by Shealah Craighead / White House)

Gov. Mike Dunleavy meets with President Trump aboard Air Force One during a stop at Joint Base Elmendorf-Richardson, Feb. 28, 2019 (Photo by Shealah Craighead / White House)

In a letter to President Donald Trump last month, Alaska Gov. Mike Dunleavy seeks fewer federal restrictions and changes he says will boost the state’s economy and efforts to mine, drill and sell timber.

The governor also lays out concerns about Alaska’s relationship with the federal government, asserting that U.S. Fish and Wildlife Service “career employees” are sabotaging the goal that both leaders share of drilling in the Arctic National Wildlife Refuge.

The March 1 correspondence, highlighting matters of “great importance to Alaskans," suggests the state and federal government work together to achieve “economic growth and energy dominance." The letter was obtained by the Daily News through a public-records request.

One request — that Trump help Alaska become the first state to receive Medicaid dollars as a block grant — made headlines earlier this month as advocacy groups in Alaska criticized the idea.

The governor lists other priorities in the letter, dated one day after he and Trump held a “productive meeting” during the president’s stopover at Joint Base Elmendorf-Richardson, said Matt Shuckerow, a spokesman for Dunleavy.

It was one of several fruitful conversations between the two, Shuckerow said.

“We continue to work with the Trump administration on a long list of priorities, including those identified” in the letter, he said in a prepared statement.

In the letter, the governor suggests the Environmental Protection Agency should “officially announce” that it will not use a pre-emptive veto under the Clean Water Act to stop any proposed development in Alaska. The EPA has been blamed for wielding that authority in 2014 to hobble the Pebble copper and gold prospect in the Bristol Bay region.

“The Pebble Mine Project is the poster child, but every potential investor must evaluate whether that pre-emptive veto could be used against their project; which results in a serious brake that chill(s) potential resource development opportunities,” Dunleavy wrote.

• A request allowing Asian tourists without visas to leave planes during fuel stops at the Ted Stevens Anchorage International Airport, so they can shop at duty-free stores or even board a different flight to a foreign destination. The program ended after the Sept. 11, 2001, terrorist attacks, and Anchorage lost that business to the airport in Vancouver, Canada, the governor writes. “It is time for (U.S. Customs and Border Protection) to allow the restart of this program,” he says.

• The Tongass National Forest should be completely exempt from the 2001 Roadless Rule that established prohibitions on road construction and timber harvests. “We look forward to you providing clarification to the Secretary of Agriculture” on the exemption being considered for the Tongass, Dunleavy wrote. “This would be a significant victory for the timber industry in Southeast Alaska and their efforts to increase the annual timber harvest, which creates jobs and fosters economic opportunity.”

• The EPA is telling the state that efforts to reduce wood smoke emissions in Fairbanks are not enough and that “costly and intrusive regulations" are needed to improve air quality, Dunleavy writes. But the EPA should “be patient” and consider potential regulatory changes that consider the Interior city’s frigid climate and high energy costs.

The governor calls for greater state authority over wetlands that are considered waters of the U.S., and for more land to be available for drilling in the National Petroleum Reserve-Alaska.

Dunleavy offers his “team" — he does not describe the team — to help rewrite the handbook for Section 401 of the Clean Water Act, which gives states authority to review and certify projects that need a federal permit for work in U.S. waters.

As for ANWR, the governor points out that the refuge could be another oil giant like Prudhoe Bay. Drilling in the coastal plain is a “key element for your goal of America to achieve energy dominance,” he wrote to Trump.

A program allowing lease sales and future drilling in the coastal plain was approved by Congress and signed by the president in late 2017.

But there’s a problem, the governor told Trump.

“U.S. Fish and Wildlife career employees undermined seismic work this winter, so the sale will occur without valuable data, likely lowering the bids,” Dunleavy wrote. “These same USFWS employees are working to undermine the lease sale.”

An application from SAExploration to conduct a seismic survey to determine oil potential in the refuge’s coastal plain was not approved this winter as the company hoped, delaying the winter-only activity until late this year at the earliest.

The Bureau of Land Management, which must approve seismic activity alongside the Fish and Wildlife Service, has proposed holding the lease sale late this year. The seismic data is not expected to be available by then.

In the letter, Dunleavy didn’t provide employee names or specific actions, or offer a solution.

But Shuckerow said in a statement that the state is "attempting to work collaboratively” with the Fish and Wildlife Service on the application for seismic work.

“... It appears -- at least within certain areas of the agency -- (the Fish and Wildlife Service) is dragging their feet and undermining prospects for responsible development in the area," the statement said.

An Alaska spokeswoman with Fish and Wildlife referred questions about Dunleavy’s assertions to officials with the Interior Department in Washington, D.C.

The Fish and Wildlife Service and BLM, both agencies within Interior, will work closely with the governor and the state, said Molly Block, Interior press secretary.

Whether the letter led to any actions by Trump or federal agencies is unclear.

“We do not have any announcements regarding issues raised with the president at this time,” Shuckerow said.