Gov. Dunleavy thrusts Alaska into a leading national role as he takes on union procedures 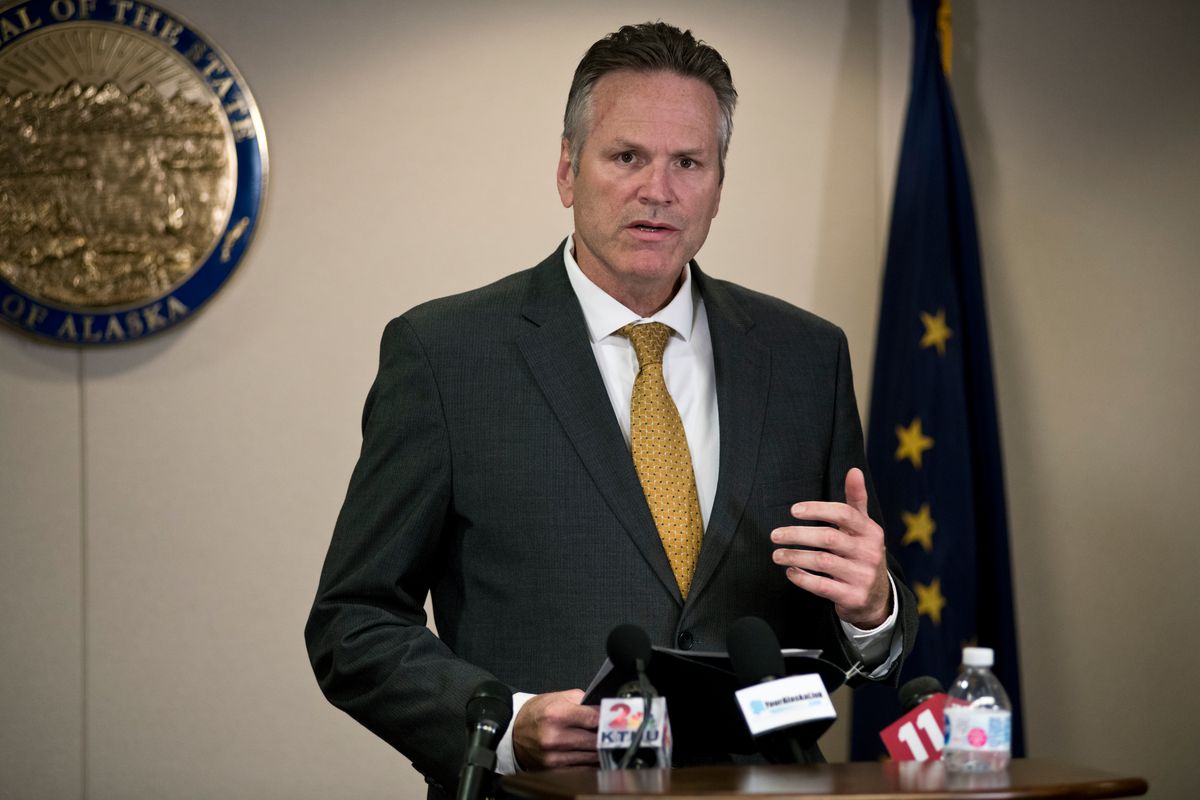 Gov. Mike Dunleavy speaks at a news conference on September 26, 2019. He issued a new administrative order requiring all unionized public employees to “opt in” to their union if they want to continue being a part of the union. (Marc Lester / ADN)

Gov. Mike Dunleavy speaks at a news conference on September 26, 2019. He issued a new administrative order requiring all unionized public employees to “opt in” to their union if they want to continue being a part of the union. (Marc Lester / ADN)

The governor’s order, blasted by unions and praised by conservative groups, puts Alaska on track to become the first state to enforce a clause in the Supreme Court’s 2018 Janus decision that says employees must “clearly and affirmatively consent” to pay union dues before the dues are deducted from paychecks, observers said.

“We applaud the governor for standing up for workers and First Amendment rights,” said Erica Jedynak, director of Employment Initiatives for Americans for Prosperity, a national anti-tax and anti-regulation advocacy group long funded by the Koch brothers.

“Alaska is the first state to actually enforce the decision at this level," Jedynak said.

Unions are calling Dunleavy’s order a threat to their membership and an overreach that they plan to strike down in court.

Some experts said it may push the Janus decision too far.

The Janus case involved an Illinois state employee, Mark Janus, who argued his state violated his First Amendment rights by requiring him to pay union fees. The decision determined whether non-union members should be required to pay dues or so-called “agency fees.”

In the interpretation of Dunleavy’s attorney general, Kevin Clarkson, the case applies to union members as well. “We’re looking at the logic of the decision from Janus and extrapolating what it means,” Clarkson said on Friday.

Clarkson said Thursday he wants to comply with Janus and protect the free speech rights of workers who don’t want to fund union activities they don’t agree with. He’s not trying to break up unions, he said.

The order arguably exceeds the scope of Janus, she said, in part because it requires both union members and nonunion members to opt-in if they want the state to automatically deduct union dues from their pay. The state will also collect authorization forms stating that the form has been signed freely and without coercion, and that the worker understands they are waiving their First Amendment rights not to pay union dues and fees.

The order could raise “substantial barriers" to due-collection, hurting unions, she said.

“While the governor’s stated motivation is to protect state workers, some would argue that the move is designed to push the envelope as far as possible (and perhaps beyond the lawful boundaries of Janus) in order to weaken public unions,” Wolf said by email.

About 12,000 of the state’s 14,800 executive branch employees are members of a union -- road engineers, environmental techs, office workers and many others.

The state plans to launch an electronic and mail-in system around Dec. 2 that will give employees the ability to “opt-in” or “opt-out” of paying union dues and fees at any time. Existing union members will have to re-affirm their decision to pay dues to the union.

Asked why unionized employees must reaffirm, Clarkson said those employees might have previously exercised their right to join the union, but “they are exercising that right in a black box, as far as the state is concerned,” because the state isn’t privy to communications between the employee and their union.

“Imagine an organization you disagree with and do not want to support. Then imagine being told by your employer, the State, that you are required to join and financially support that organization as a condition of employment. That is what Alaska has been doing to some employees”

“Imagine being forced to register with the gov’t to join an organization you support. Forced to sign biased gov’t statements before you can join. The gov’t shredding a contract to do it. That’s his proposal for your right to free association & Art. 1, § 15 of Alaska’s Constitution”

Imagine being forced to register with the gov’t to join an organization you support. Forced to sign biased gov’t statements before you can join. The gov’t shredding a contract to do it. That’s his proposal for your right to free association & Art. 1, § 15 of Alaska’s Constitution https://t.co/en7w54EHBz

The ability for union members to come and go at any time could create big headaches for unions trying to plan efforts and for the state as it tracks deductions, said David Wing, a labor attorney with a national practice based in the Kansas City area.

Unions might seek to challenge that section in court, he said by phone.

Wing said the state of Missouri attempted the “opt-in” system in legislation passed shortly before the Janus decision was issued in June 2018. The legislation requires “the annual written or electronic authorization of the member or nonmember” before dues are withheld from a paycheck.

The legislation has been stymied by legal disputes, after it gave an unfair advantage to some unions over others, he said.

Mark Mix, president of National Right to Work Legal Defense Foundation, which brought and won the Janus case, said Alaska “took a major step forward” on Thursday in complying with Janus, according to a statement from the group.

Days after the Janus decision was issued in June 2018, the foundation sent a letter to Alaska payroll managers. It urged them to stop deducting union dues unless employees had given the state “clear and compelling” evidence, as Janus requires, that the workers knowingly waived their First Amendment rights not to fund union activities, the statement said.

The foundation threatened legal action against the state if managers didn’t comply. It has filed more than 30 lawsuits nationally to ensure Janus is enforced.

“We urge other states to follow Alaska’s lead and prioritize the constitutional rights of state employees under the Janus precedent,” Mix said.

Recently, state officials have stopped deducting union dues for about a dozen members of the Alaska State Employees Association who said they want out of the union. The union, the largest state public employee union with about 8,000 members, has asked Anchorage Superior Court Judge Gregory Miller to halt that action.

The state has hired the help of Consovoy McCarthy, a Virginia-based law firm that filed amicus briefs supporting Janus in his Supreme Court case.

Under the agreement, unionized ASEA employees have 10 days per year to opt out of paying union dues. If an employee does not opt out during that period, he or she must pay dues for another year.

The governor is trying to weaken the power of unions and their members so he can privatize state services, Metcalfe said.

The contract the state signed interferes with that goal, he said.

Tshibaka said she signed the contract as an administrative procedure, following negotiations between the union and former Gov. Bill Walker’s administration.

Tshibaka said Friday she has not changed her position on the contract, as Metcalfe suggested in an Anchorage Daily News article.

“It was an administrative act to finalize what the Walker administration had agreed to,” Tshibaka said.