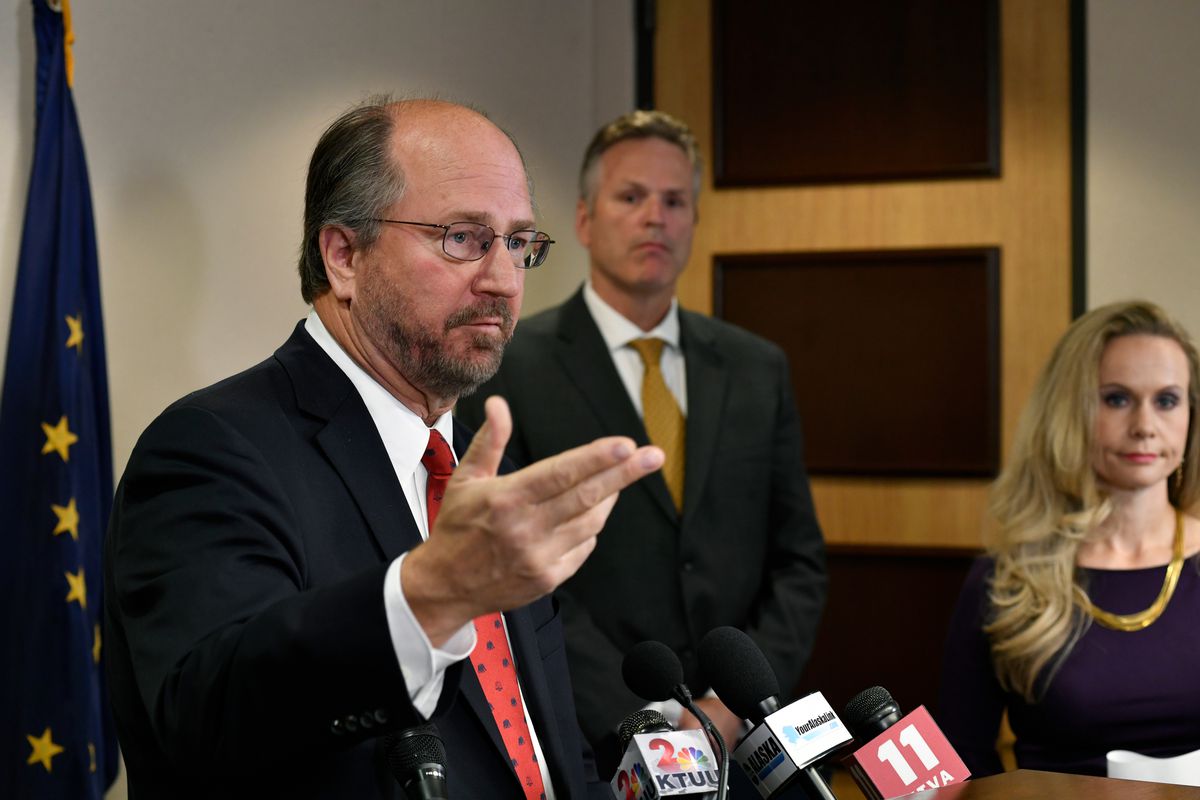 Gov. Mike Dunleavy on Thursday issued an administrative order requiring all unionized state employees to “opt in” to their union if they want to continue being members, a step that union officials quickly denounced as a “radical” swipe at their organizations that would not stand up in court.

The order, affecting about 12,000 state workers in the executive branch, requires the Alaska Department of Administration to draft new procedures to implement the governor’s instruction and appears to be the first action of its kind in the United States.

Thursday’s announcement broadens the dispute between Dunleavy’s administration and the state’s public-employee unions. It is already fighting the Alaska State Employees Association’s 8,000 members in a series of legal cases. The new order would affect the collective-bargaining contracts of all state employee unions, not just ASEA.

The action is based upon a legal opinion by Attorney General Kevin Clarkson that the state’s existing policy did not appropriately follow a 2018 U.S. Supreme Court decision known as Janus. The case involved an Illinois state employee, Mark Janus, who argued his state violated his First Amendment rights by requiring him to pay union fees. The case determined whether non-union members should be required to pay dues or so-called “agency fees.” In Clarkson’s interpretation of the case, it applies to union members as well.

“We think this is what the Constitution requires,” Clarkson said Thursday afternoon.

Vince Beltrami, president of the AFL-CIO, the umbrella organization for many of the state’s unions, rejected that argument and said it would be challenged in court.

Clarkson attempted to pre-emptively rebut that argument as the administration rolled out its proposal.

"I have this to add: This is not about ‘union-busting,’” Clarkson said.

“That’s nonsense, this is all about free choice for the employees,” Clarkson said. “Any employee who wants to opt into the union can do so.”

Given that the Dunleavy’s administration has already been sued by former state employees who said they were fired for their speech, Beltrami said the idea that the governor’s administration cares about free speech “doesn’t pass the red-face test.”

Jeff Feldman, a former Anchorage trial attorney who’s now a professor at the University of Washington School of Law, said he’s “not aware of any state that has taken the view of Janus that has been adopted by the Alaska AG. That doesn’t mean he’s wrong. But it does mean that his view does not currently enjoy support from any other attorney general in the country, Democrat or Republican, and that’s an uncommon situation.”

Feldman said that in his view, the AG’s opinion is incorrect, in part because it selectively quotes the Supreme Court and excludes important qualifying words.

“The AG’s Opinion incorrectly asserts that Janus applies to all employees, including union members, when it explicitly does not. It applies to union non-members. More troubling, the opinion supports its conclusion by repeatedly quoting Janus selectively, omitting the union ‘nonmember’ qualifier in every instance,” Feldman wrote by email.

Senate Minority Leader Tom Begich, D-Anchorage, said in a written statement, “This governor does not have working Alaskans’ First Amendment rights in mind, and there is a clear record of that.”

The Alaska Public Employees Association isn’t yet involved in a legal dispute with the state. But business manager Brian Penner implied that will change with Thursday’s decision.

The order affects a wide range of unions and employees, from transportation engineers to environmental technicians, troopers, correctional officers, office workers and others, said Jake Metcalfe, executive director of the ASEA.

One clear legal problem with the governor’s “radical, extreme” approach is that the new opt-in procedure would violate the current procedure spelled out in the three-year contract with ASEA that was signed in August, he said.

“When we negotiated this contract the Janus decision was in effect and state agreed to this process because it was legal,” he said.

Metcalfe said state administration commissioner Kelly Tshibaka “signed that contract, and now, after signing it, she has apparently had a complete change of heart as to what she agreed to.”

But under Clarkson’s interpretation of the Janus decision, paying dues is an act of “speech." If employees cannot stop that speech at will, they have been denied their free speech.

“Any provision that conflicts with the United States Constitution is not one that I can comply with,” Clarkson said.

Before launching the new policy shift, the state hired Consovoy McCarthy, a Virginia-based law firm that filed amicus briefs supporting Janus in his Supreme Court case. The company’s contract with the state was signed Aug. 2, before Clarkson issued the legal opinion that resulted in Thursday’s action.

Under the state’s plan, employees will be asked to opt-in to their unions on a website where the employees can click a box saying ‘Yes’ if they want to opt-in to the union, Clarkson said. They will have to have a “confirming email exchange” to confirm they are the ones who made that choice, he said.

“We will work with the unions in the process for developing this system,” said Tshibaka, commissioner of the Department of Administration. The system will begin running around Dec. 2, she said.

A mail-in option will also be available for those who can’t access the system electronically, she said. The state intends to give employees 30 days’ notice before the system launches, she said.

Tshibaka said about 12,000 of the state’s 14,800 executive branch employees are members of a union.

An employee will be able to opt-in or opt-out at any time, according to the administration’s answers to “frequently asked questions” posted Thursday.