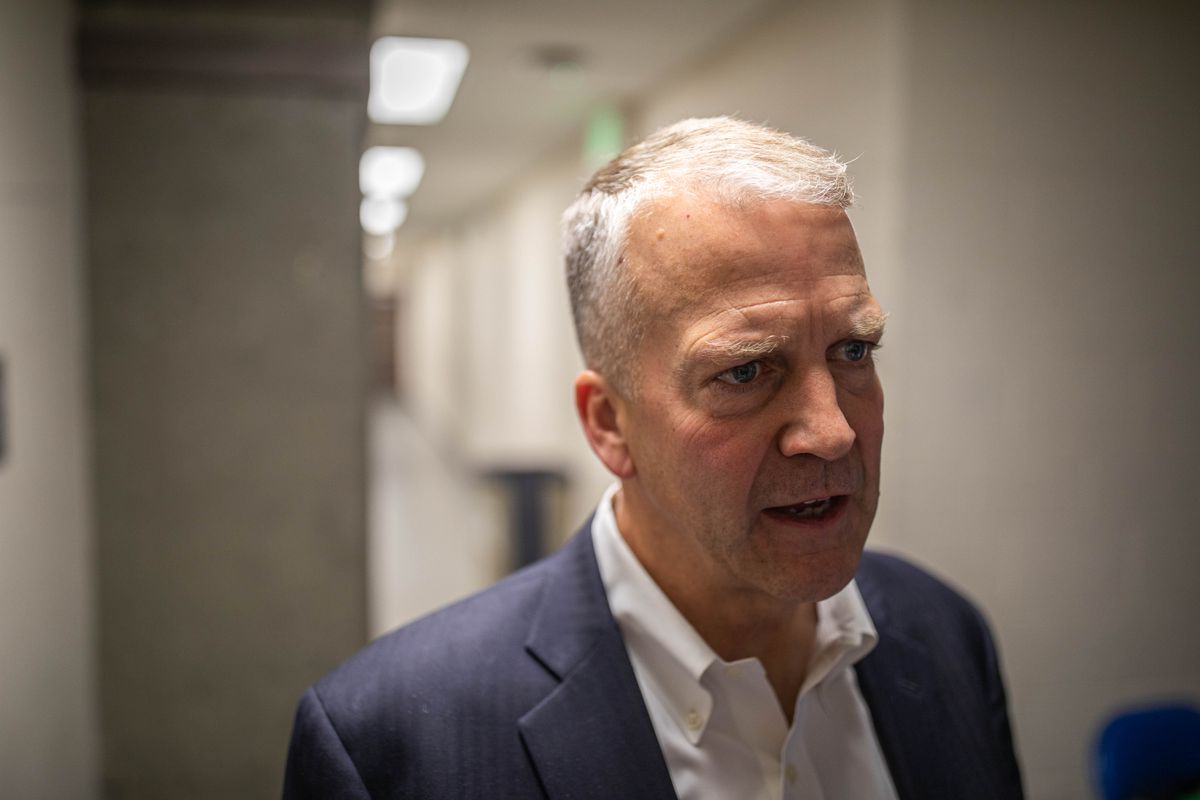 Senator Dan Sullivan, R-Alaska, speaks to members of the media on Saturday, Oct. 19, 2019 during the Alaska Federation of Natives convention at the Carlson Center in Fairbanks. (Loren Holmes / ADN)

Senator Dan Sullivan, R-Alaska, speaks to members of the media on Saturday, Oct. 19, 2019 during the Alaska Federation of Natives convention at the Carlson Center in Fairbanks. (Loren Holmes / ADN)

FAIRBANKS — Alaska’s two U.S. senators on Saturday said President Donald J. Trump’s plan to host the 2020 Group of Seven summit of world leaders at his resort in Florida, scrapped later in the day, gave a bad impression though it might not have been illegal.

“Even if something like this is legal, it has kind of an appearance of being a problem," said Sen. Dan Sullivan, R-Alaska. "It’s something I wouldn’t have done. I don’t agree with the president on everything he does.”

The Alaska senators spoke separately with reporters Saturday after they delivered speeches to the Alaska Federation of Natives, wrapping up its 53rd annual convention in Fairbanks. Several hours later, Trump announced the plans were being scrapped.

The senators, both Republicans, also criticized the process of the House impeachment inquiry against the president, launched over Trump’s request to Ukraine President Volodymyr Zelensky to investigate Democratic political rival and former vice president Joe Biden.

Sen. Lisa Murkowski, R-Alaska, had previously given a reporter in Washington, D.C., a simple no answer to the question of whether Trump’s plan to host the summit at the Trump National Doral Miami golf resort was appropriate.

Murkowski expanded on that answer Saturday, adding that she doesn’t think it’s illegal, but it doesn’t look good.

“It might not be illegal to go there, but why, just why bring on the controversy over it?" Murkowski said, especially with an impeachment probe already underway. “Just avoid the perception of any impropriety. Just don’t do it. There’s lots of hotels in Florida.”

“But I would think his folks would say, ‘Hmm, maybe not a good idea,' ” Murkowski said.

Murkowski said the impeachment inquiry in the House lacks transparency.

“In fairness, it’s been a little choppy because there isn’t a lot of transparency with how this information is coming out,” shes said. “I think that that level of transparency would be helpful because people need to be able to trust in the process. Right now, I don’t think there’s a lot of trust going on. I think they could enhance that.”

“I have been trying to gather what’s coming out and what’s being said, and I will factor that in along the way,” she said.

Sullivan said Alaskans should read the rough transcript of the phone call and the whistleblower report to determine if the president acted improperly.

The relevant issue to him is whether there is an impeachable offense, Sullivan said.

“Remember, impeachment is one of the most severe remedies we have under our constitutional system and it certainly undermines the votes” of Alaskans and Americans, he said.

Sullivan said he doesn’t see any quid pro quo requests from the president in the transcript, despite what some have asserted.

He said Rep. Adam Schiff, D-Calif., who is overseeing the impeachment inquiry, appears to have predetermined the outcome.

“It looks like Chairman Schiff is running a verdict-first, facts-later process,” Sullivan said.

Sullivan is worried impeachment proceedings in the House could threaten to his efforts to get bills passed for the state.

“If all that’s happening in the House is impeachment, there’s a huge opportunity cost for Alaska and the rest of the country,” he said.