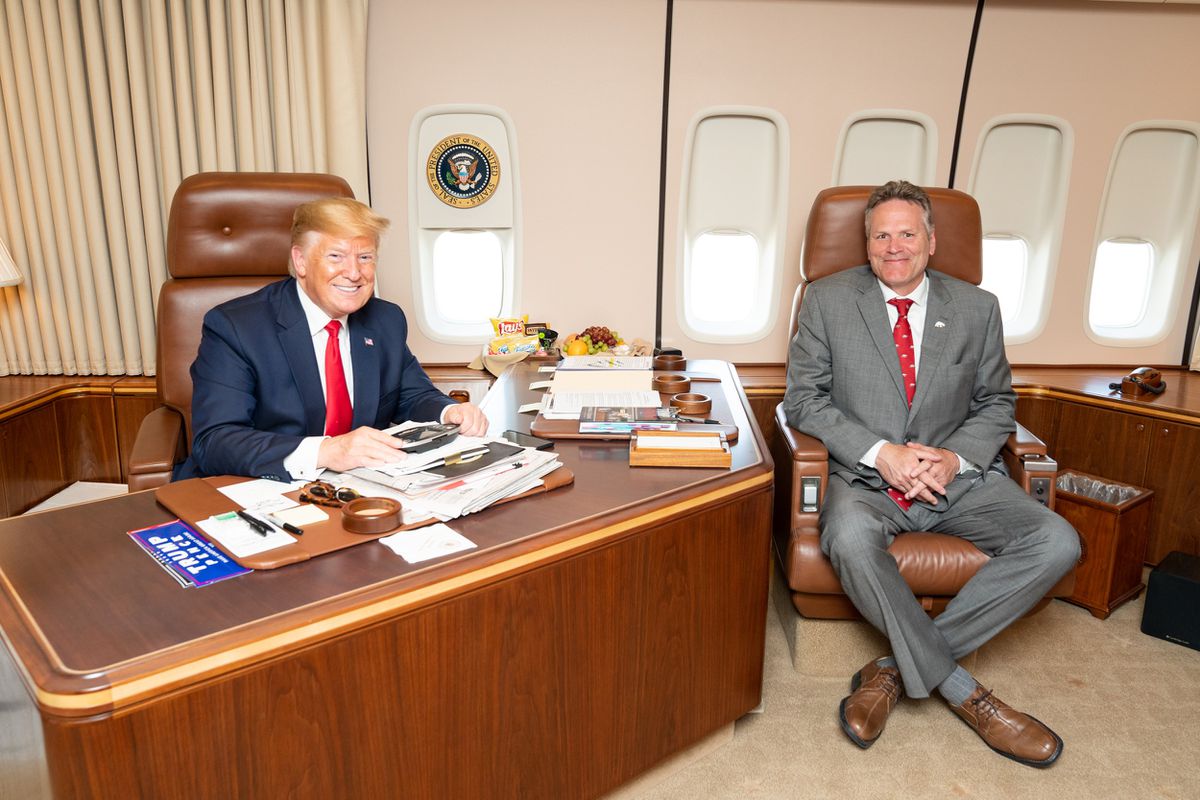 In a Wednesday post on Twitter, President Donald Trump expressed his support for Alaska Gov. Mike Dunleavy, who is defending himself against a campaign that seeks to remove him from office.

The president’s message referred to Dunleavy as “my friend” and said he “is being treated very unfairly by the Democrats.” Trump’s two-tweet message also included a link to the independent expenditure group collecting donations for Dunleavy’s defense.

...our Military, 2nd Amendment, Energy, and so many other things that the Democrats don’t care about. Please stop the Dems from hurting a very good and hard-working man!https://t.co/uUnWOtVxBV

Claire Pywell, campaign manager for the recall campaign, said she is “relatively disappointed, though unsurprised, to see the governor lie about who we are and who the signers and donors are."

Though the tweets came from the president, Pywell said she believes the president got his information from Dunleavy.

“Tell Joe Usibelli Sr. that Democrats are behind it,” Pywell said, referring to the president of the state’s largest coal mine, who is a recall sponsor.

When asked whether he is a Democrat, Usibelli said by phone, “Oh, hell no. The movement, if you want to call it that, is very much across the board. I’ve never been a Democrat in my life."

Usibelli’s spouse, Peggy Shumaker, was on the call with Usibelli and said the roster of recall backers includes former state Sen. Arliss Sturgulewski, who twice received the Republican nomination for governor.

“We have been quite surprised, pleasantly,” she said about multipartisan support for the recall.

The Alaska Division of Elections is scheduled to determine as early as Monday whether the recall passes legal muster and can proceed.

Some Alaskans called for Dunleavy’s recall in March, soon after he introduced a budget proposal that included sweeping cuts to state spending, but a formal effort did not begin until July, after he vetoed more than $400 million from the state budget. After legislative resistance, those vetoes were cut in half.

The governor has said the cuts are necessary to balance the state budget without reducing the size of the Permanent Fund dividend or raising taxes. A majority of legislators have opposed the governor’s plan, and this year’s dividend was $1,606 instead of $2,900, the figure proposed by the governor. (Dunleavy has also proposed a plan for retroactive payments.)

This week, the governor has been on the East Coast and has conducted several interviews with national media, including Bloomberg and One America News. Dunleavy has also met with Alaska’s delegation to the U.S. Senate, according to staff members of Sens. Lisa Murkowski and Dan Sullivan.

A White House spokesman on Tuesday declined to speak on the record about presidential appearances with the governor.

Dunleavy’s office has not provided the governor’s itinerary for the trip. Messages to his scheduler were not returned. The governor’s office also did not confirm reports that Dunleavy met with Trump at the White House.

“The governor is on a personal trip. Sorry, I have no information beyond that,” said Jeff Turner, Dunleavy’s deputy communications director.

In response to subsequent questions, Turner said, “No state funds were used for the Governor’s personal trip.”

In the past month, Dunleavy has increased his appearances on national broadcasts. Experts have said that those appearances are intended, in part, to raise awareness of the governor’s actions in office and encourage donations to the recall defense.

Last year, the president endorsed the governor before his subsequent win in the general election.