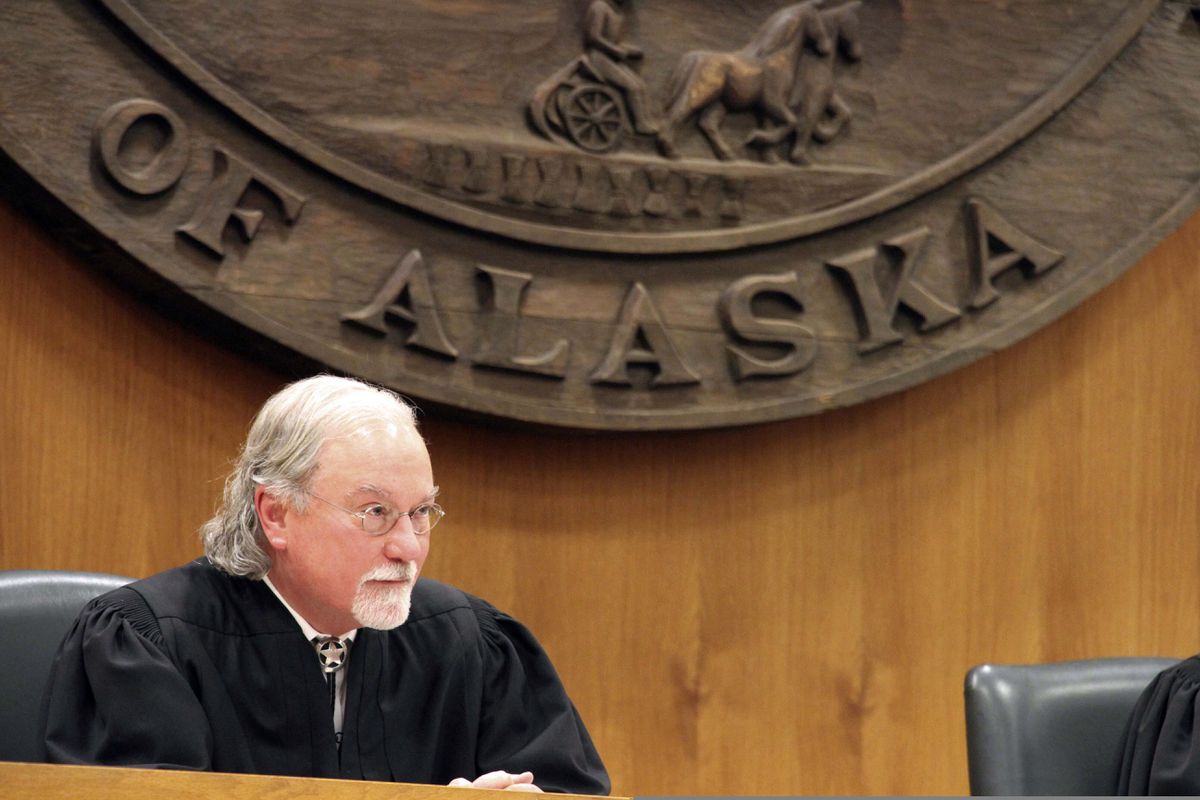 In this Oct. 9, 2019, file photo, Alaska Supreme Court Justice Craig Stowers listens to arguments in a lawsuit in Anchorage. Stowers, one of the longest-serving members on the Alaska Supreme Court, plans to retire later this year. (AP Photo/Mark Thiessen, File)

In this Oct. 9, 2019, file photo, Alaska Supreme Court Justice Craig Stowers listens to arguments in a lawsuit in Anchorage. Stowers, one of the longest-serving members on the Alaska Supreme Court, plans to retire later this year. (AP Photo/Mark Thiessen, File)

One day after announcing his plans to retire June 1, Alaska Supreme Court justice Craig Stowers said his intent is to blunt the impact of a wave of high-court retirements expected in the next five years.

Alaska judges are required to retire at age 70, and four of the Supreme Court’s five justices will hit that benchmark between February 2023 and February 2025.

In his judgment, having 80% of the court replaced within two years “would be devastating for the Court, the Alaska Court System, and ultimately the people of Alaska," Stowers wrote in an email.

By retiring now, Stowers will spread out the problems caused by that wave of retirements, he said.

“A turnover of this magnitude would cause great disruption in the Court’s ability to accomplish all that it is charged to do. It could take years for the new Court to gain the collective knowledge and experience necessary to become a fully functioning judicial and executive leadership body,” he said of the consequences if four of the five justices retire in sequence.

But for his early retirement, Stowers would be required to retire in June 2024.

Governors appoint replacement judges from a list of qualified candidates vetted by the Alaska Judicial Council. Gov. Mike Dunleavy is up for election in 2022, unless the ongoing recall campaign forces an earlier referendum. Stowers’ early retirement means his successor will be chosen before the 2022 election, instead of afterward.

The sole justice who does not face mandatory retirement by 2025 is Susan Carney, appointed by Gov. Bill Walker in 2015.

Spreading out retirements will allow Carney and Stowers’ own replacement to gain experience before new members are named later in the 2020s. Stowers said that while he’s reluctant to retire early, he feels the state will benefit if he does so.

Drawing on his history of referencing science fiction, Stowers used a quote from “Star Trek” to explain his thinking.

The Supreme Court typically acts unanimously, but “in the unlikely event of an even split, the issue or point decided would have no precedential effect under Appellate Rule 106,” she said.