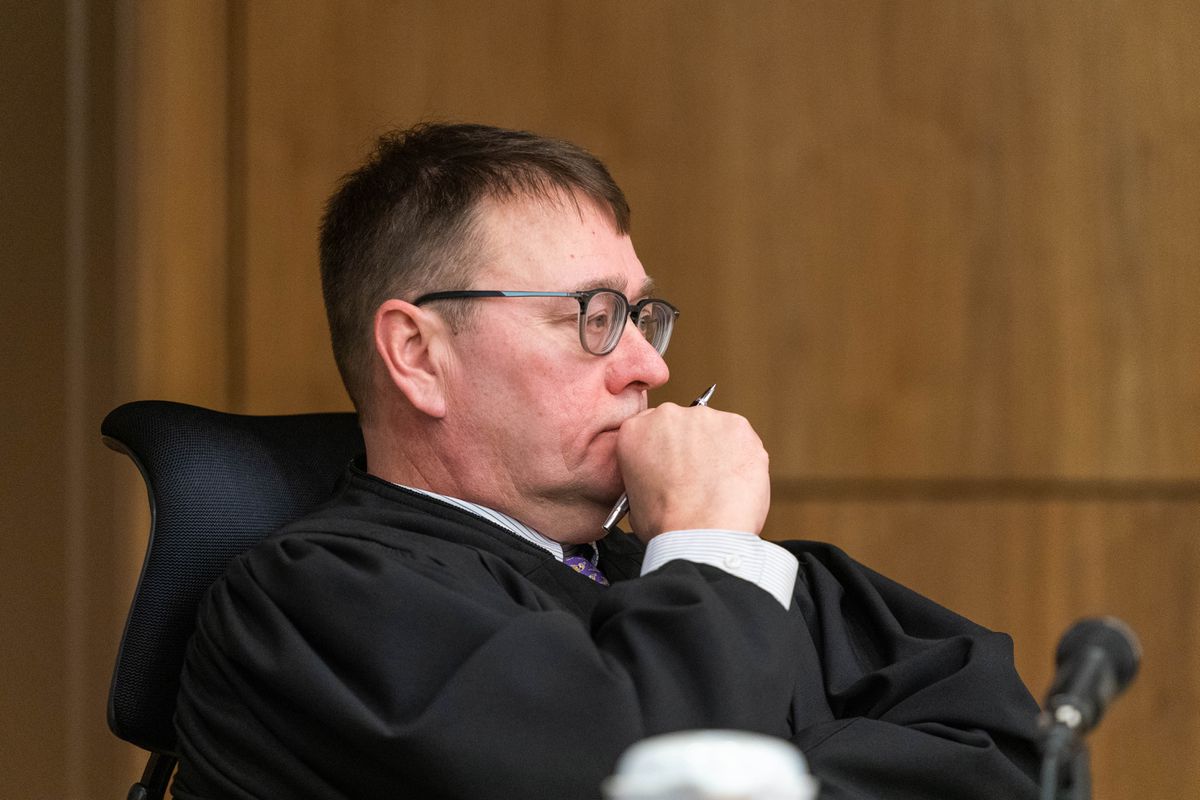 Superior Court Judge Eric Aarseth listens to arguments Friday, Jan. 10, 2020 in Alaska Superior Court. At issue was whether supporters of an effort to recall Alaska Gov. Mike Dunleavy should be allowed to proceed to a new signature-gathering phase. (Loren Holmes / ADN)

Superior Court Judge Eric Aarseth listens to arguments Friday, Jan. 10, 2020 in Alaska Superior Court. At issue was whether supporters of an effort to recall Alaska Gov. Mike Dunleavy should be allowed to proceed to a new signature-gathering phase. (Loren Holmes / ADN)

A state judge has paused signature gathering in the recall campaign against Gov. Mike Dunleavy, saying it is inappropriate for the Alaska Division of Elections to print signature-gathering booklets until the state Supreme Court determines what grounds for recall are legal.

Speaking in Anchorage Superior Court, Judge Eric Aarseth said that if signature-gathering begins as he previously ordered, there could be confusion and additional litigation if the Supreme Court subsequently rules against some of the reasons for recall while upholding others. Aarseth himself previously rejected one of the grounds for recall offered by Recall Dunleavy, the group promoting a recall.

Last week, an error in the court system made it appear as if Aarseth had already paused the next phase of the recall campaign. He subsequently corrected that mistake, and on Wednesday, attorneys representing the governor and the recall campaign were given a chance to debate the issue. Aarseth issued his definitive ruling after those arguments.

In order to force a special election, Recall Dunleavy must gather the signatures of at least 71,252 registered voters, or 25% of the number of voters in the last general election. A first round of petitioning, required for the Division of Elections to consider the recall application, garnered the signatures of 46,405 registered voters in five weeks.

The special election would be a straight up or down decision. If voters approve the recall, Lt. Gov. Kevin Meyer would become governor.

The election would take place any time 60-90 days after the Division of Elections certifies that petitioners have gathered enough signatures. If the state’s Aug. 18 primary election or the Nov. 3 general election fall in that window, the recall could take place then. Otherwise, voters would see a special election day.

Speaking on behalf of Stand Tall With Mike, a group opposing the recall, attorney Brewster Jamieson said that if signature booklets are printed now, there could be problems if the Alaska Supreme Court overturns one or more of the reasons for recall.

“At a minimum, we’d expect there’d be more litigation on the issue,” he said, explaining that he would be likely to challenge the validity of signatures gathered before the Supreme Court ruling.

Ahead of the 2018 election, a superior court judge allowed signature-gathering on a pro-salmon ballot measure, and those signatures were not challenged even after the Alaska Supreme Court ruled part of the initiative unconstitutional.

“That is something that could very well happen in this case if there were changes,” Lindemuth said.

After the hearing, Jamieson said a recall is not a ballot measure, which faces a particular deadline to reach the ballot. A recall election, he said, could take place at any time of the year.

The Alaska Division of Elections, represented by state attorney Margaret Paton-Walsh, did not oppose or support the request for a delay, saying only that “the most important thing for it at this point is to get some certainty about how this process is going to play out.”

During Wednesday’s court appearance, Jamieson said Stand Tall With Mike intends to file its appeal to the Alaska Supreme Court on Monday, beginning the next stage in the legal process.

“We’re going to work out a way to get this to the Supreme Court in a timely manner,” said Craig Richards, another former Alaska attorney general who is an attorney for Stand Tall With Mike.

Lindemuth said Recall Dunleavy will ask the state’s high court for a schedule that would allow it to decide the case in February.

“It’s hard to see why such a rapid resolution is appropriate,” Richards said when asked about Lindemuth’s plans. He added that Stand Tall With Mike’s attorneys have not discussed the issue internally yet.

Claire Pywell, campaign director of Recall Dunleavy, said her group disagrees with Richards. Every day a recall election is delayed, she said, is a day that harms Alaskans’ constitutional right to a recall.

“The sooner we have clarity (from the Supreme Court), the sooner we understand when books are in Alaskans’ hands,” she said.