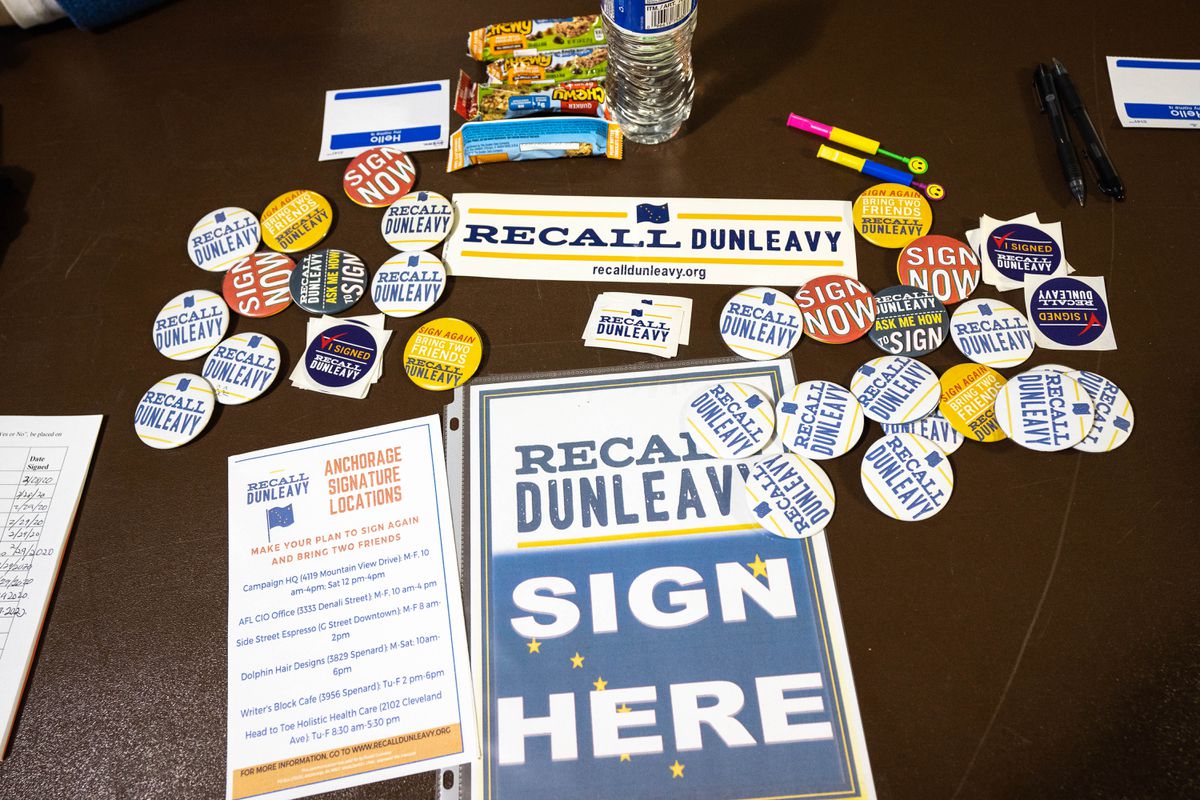 Buttons and stickers are displayed on a table set up by the Recall Dunleavy group on Saturday, Feb. 29, 2020 at the Sullivan Arena in Anchorage. The group is beginning its second round of signature-gathering for a vote to recall Gov. Mike Dunleav. (Loren Holmes / ADN)

Buttons and stickers are displayed on a table set up by the Recall Dunleavy group on Saturday, Feb. 29, 2020 at the Sullivan Arena in Anchorage. The group is beginning its second round of signature-gathering for a vote to recall Gov. Mike Dunleav. (Loren Holmes / ADN)

Volunteers for the group trying to recall Alaska Gov. Mike Dunleavy welcomed signers into the halls of the Sullivan Arena in Anchorage on Saturday morning. The event is one of 58 that were held across the state over the weekend.

Registered Alaska voters came in to sign a petition to recall the governor, which organizers hope to complete — with at least 71,252 signatures — as soon as possible, according to Claire Pywell, campaign manager for the pro-recall group, Recall Dunleavy holding the event.

“There’s never been a recall that’s made it this far. And that’s for good reason," Pywell said. "There’s serious public support behind us.”

Pywell said hitting that many signatures in a single weekend would be “incredible,” but that this weekend won’t be the last opportunity to sign the official signature booklets. There are several signature gathering events planned statewide going forward.

“We’re just working until we hit that number,” Pywell said.

The group will need to gather enough signatures in order to begin a recall vote on the current governor, Mike Dunleavy.

If they accumulate enough signatures, the group will submit them to the Division of Elections, which will then have 30 days to verify the signatures.

Then, the Division of Elections would have 60 to 90 days to schedule a special election.

This is the second round of signatures gathering for a recall vote, and everyone who previously signed will need to sign again, Pywell said.

Barbara Derr, who worked in computers and informational technology for several state administrations — from Knowles to Dunleavy — and retired last January, was volunteering at a signature-gathering table.

“It’s kind of odd to be saying ‘get rid of one of the bosses I had for a bit," Derr said. “But it’s our right as citizens to be able to do this and I think it’s great and that we can come out and we can say our opinions without there being any negative repercussions.”

She said that if she was still working in the governor’s office she would not be volunteering, but saw it as an experiment in her retirement after watching so many campaigns over the years.

Arthur Cohan, who works as a teacher at the McLaughlin Youth Center said he was signing on Saturday morning because he has concerns about mental health care and education around the state.

“As an educator, I think about the future,” Cohan said. “And sometimes we just concentrate on the present but sometimes we don’t understand the long-term effects of some of the policy changes.”

He expressed frustration over of a lack of effort to address issues in psychological services around the state, including at the Alaska Psychiatric Institute.

In the last week, two new groups formed to oppose the recall efforts.

“The governor’s aware that it’s going on, but it’s not directed by the governor,” she said.

Pywell said her group is undeterred by the new efforts that oppose the recall.

“We’re not going to get distracted by them,” Pywell said of anti-recall efforts. “We always knew that that would happen.”

Correction: An earlier version of this story incorrectly said the Division of Elections would have 30 to 90 days to schedule a special election. It would have 60 to 90 days.