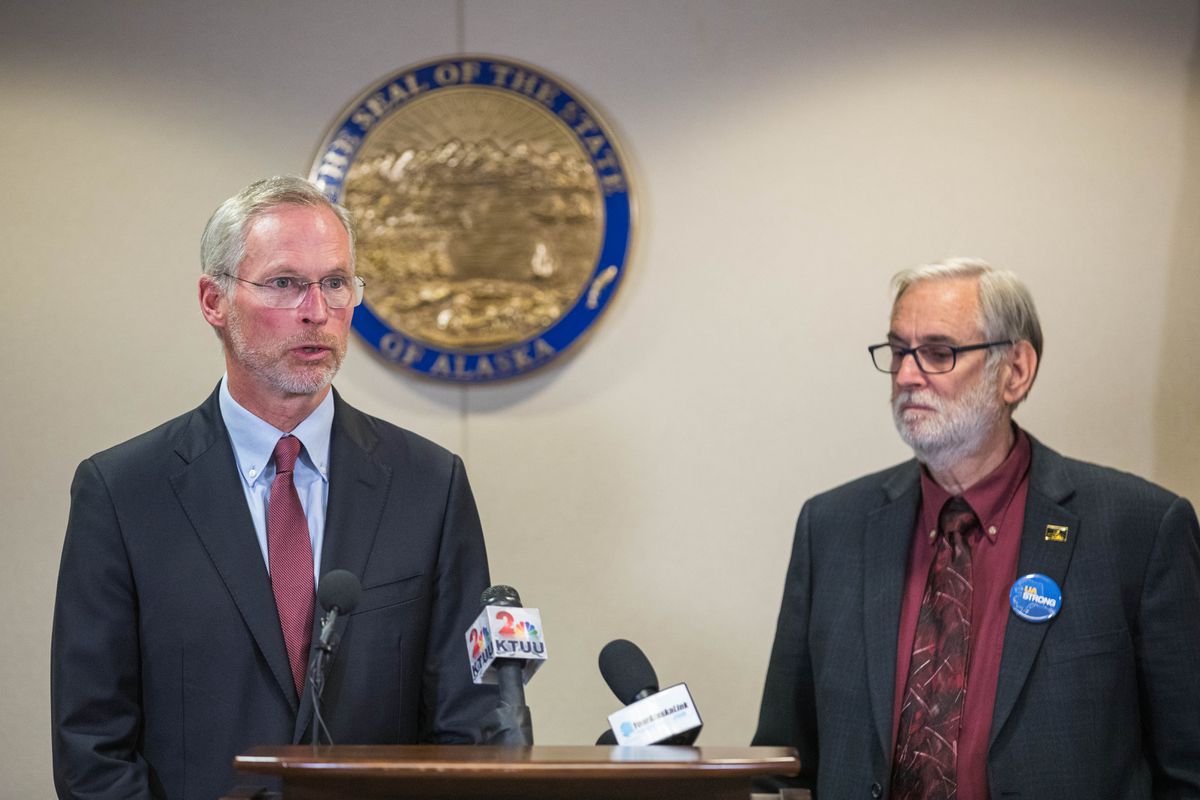 University of Alaska President Jim Johnsen and UA Board of Regents chairman John Davies speak with reporters, Aug. 13, 2019, after Davies and Gov. Mike Dunleavy signed an agreement for a 3-year, $70 million budget cut to the University of Alaska. (Loren Holmes / ADN)

University of Alaska President Jim Johnsen and UA Board of Regents chairman John Davies speak with reporters, Aug. 13, 2019, after Davies and Gov. Mike Dunleavy signed an agreement for a 3-year, $70 million budget cut to the University of Alaska. (Loren Holmes / ADN)

President Jim Johnsen spoke about the public system's accomplishments and value to the state, but also its budget problems during the AlaskaCAN! Conference in Anchorage last Friday.

Republican Gov. Mike Dunleavy has proposed an unprecedented $135 million cut to state funding for the system in 2019, about a 41% reduction.

An agreement between the university system and Dunleavy in August sought to lessen the blow. They agreed to a smaller, $70 million cut spread over three years, including a $25 million cut in the current academic year.

If the agreement had not been reached, Johnsen said, the annual State of the University address would have been a “memorial service.”

"It wasn't the best deal ever. But it was a lifesaver," Johnsen said.

"Programs will be reduced and discontinued," Johnsen said. "But as we take our destiny in our own hands, as these decisions are made, the interests of our students are first, always."

Amid academic and administrative reviews and program reductions, the university system will continue to serve its mission for Alaska, he said.

The system is working to increase federal funding for research in various areas including the environment, behavioral health and national security, he said.

"Our research really provides terrific quality for what happens in our classrooms. In addition to that, it is an economic engine. With the state's investment of $25 million, we return $150 million," Johnsen said.

Moving forward, the university system’s plan must address budget cuts by driving revenue through increased enrollment and the resulting tuition, he said.

[Regents order 5% increase in resident tuition for University of Alaska]

Each university is examining tuition and looking at the possibility of different rates across the system, with potential increases and decreases that will hopefully include "a sizable tuition reduction at the community campuses," Johnsen said.

Johnsen said if the university system had a mascot it would be the phoenix, “the bird of fire, rising anew, strong, bright, and resilient from the ashes of a most challenging 2019.”