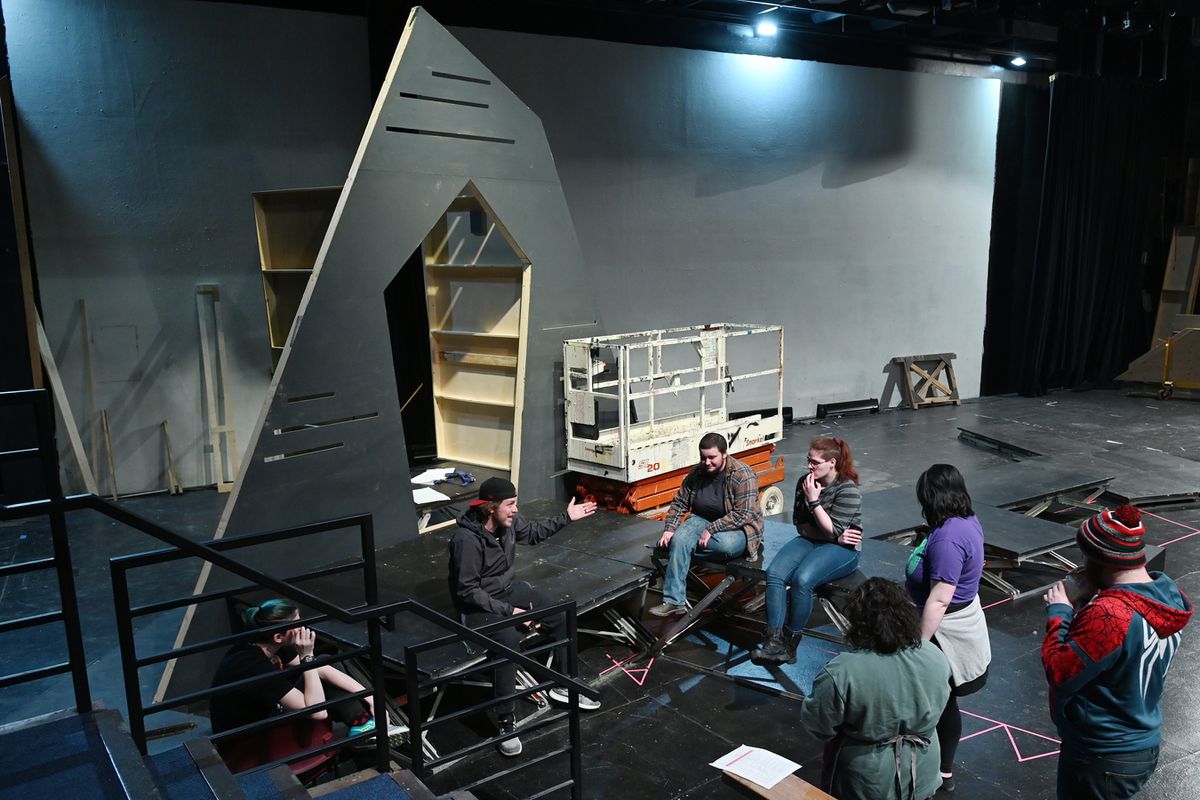 UAA theater students talk about the program being eliminated while working on the set for the upcoming play "Machinal" on Tuesday. (Bill Roth / ADN)

UAA theater students talk about the program being eliminated while working on the set for the upcoming play "Machinal" on Tuesday. (Bill Roth / ADN)

The University of Alaska Anchorage on Tuesday released a proposal to discontinue programs ranging from theater to sociology to hospitality administration, the opening salvo in what’s sure to be a bruising battle over how to cope with $70 million in cuts to the university system’s operating budget over three years.

“This news is difficult for all of us to comprehend," UAA chancellor Cathy Sandeen wrote in an email to students and staff Tuesday. “It is not what any of us want to do, but our current budget context requires us to make difficult choices."

The recommendations come as the result of severe budget tightening and tuition increases ordered by the university’s Board of Regents to deal with “new fiscal realities" resulting from staggering state budget cuts.

News of programs slated for elimination will come as a shock to many, Sandeen said in an interview Tuesday. While budget distress and cuts have been discussed for years now, the university has mostly been able to protect core academic programs — until now, she said.

“This is the first time we’re acknowledging we have to make cuts. Maybe people are surprised we’re actually going forward with it. There’s been a little hope and denial functioning.”

Gov. Mike Dunleavy initially had called for a $135 million cut to the university system, but a compact the system entered into with the state reduced the number to $70 million over three years.

All University of Alaska campuses have been told to go through a process known as “expedited review,” taking stock of each degree program on a shortened timeline to identify places to cut, according to a statement from the university.

UAA sliced $12 million from its budget for the current fiscal year, mostly through administrative cuts and unfilled positions. Next fiscal year, it needs to extract an additional $11 million, Sandeen said.

The proposed changes to academic programs would account for about $3 million of the cut. The rest will come from administrative reductions, she said. The results of a parallel review of administrative spending will be announced Wednesday, she said.

The cuts recommended by UAA’s deans on Tuesday include “deleting” programs such as theater and sociology undergraduate degrees, a master’s in clinical psychology and a master’s in creative writing, among many others.

Other degree or certificate programs in welding and nondestructive testing, logistics and supply chain operations and hospitality administration were recommended for “suspension,” meaning they would stop accepting new majors.

The deans recommended that some programs, including nursing and accounting, be given more resources.

Sandeen said to decide which programs to cut or grow, administrators looked at data including enrollment numbers over time, the number of graduates, trends in workforce demands, the cost of the program and other factors such as endowments or other funding sources.

The university would work to make the documents outlining the decision criteria public on its website, spokeswoman Kirsten Olmstead said. The documents had not been posted as of Tuesday afternoon.

“If you look at the College of Health, where there’s huge demand for health care workers in state, it doesn’t make sense to cut there," she said. "It would be contrary to our mission and what the state and our elected officials expect.”

[Too much, too little: University funding deal draws criticism from legislators on right and left]

Only a few entire departments, such as sociology and theater, will fully cease to exist if the cuts go forward. Other programs will lose certificate programs or specific degree offerings but wouldn’t go away entirely.

The school has emphasized that the recommendations are not final decisions about the fate of each program.

The provost, chancellor, UA System Academic Council and academic and student affairs committees will all have a chance to weigh in over the next few months, according to the university. “Listening sessions” for students, staff and faculty are in the works.

In June, final recommendations will go to the Board of Regents. The board’s decisions will be final, according to Sandeen.

The university would need to give faculty members in unions at least a year’s notice if their positions were being eliminated, she said. Staff could be dismissed more quickly.

And UAA will still have an obligation to ensure students enrolled in discontinued programs finish their degrees. That could happen through assistance transferring, “teaching out” programs until the last of the current students has graduated or other accommodations.

“It’s ethically and morally the right thing to do,” Sandeen said.

Also, the university’s accreditation requires it.

Reaction to the cuts was already rippling through the community Wednesday. People voiced concerns about the loss of the Master of Fine Arts program from Alaska’s literary scene, and impacts to the university’s contributions to anthropological research and training sought-after clinical psychologists.

“We need more mental health providers in Alaska and not less," Michael Reed, an Anchorage psychologist, said in an email.

On Tuesday, students were also beginning to feel the weight of the news on campus — perhaps nowhere as much as the theater department, one of the programs facing a full cut if the Board of Regents votes in favor of the reductions.

UAA’s theater program is small, but it is the center of the universe for a band of die-hard theater majors who spend 10-plus hours a day inside the cavernous set shop, lighting design workshop and costume stock shop putting together productions like the upcoming “Machinal," set to debut in April.

One of those students is Brighton Coggins, 21. He says UAA’s Department of Theatre and Dance did nothing less than save his life.

Coggins transferred to UAA after a demoralizing college start in Arizona left him depressed enough to be hospitalized.

At UAA, he says he found professors who drew out his love for costume design. He also found fellow students who became his best friends.

Nine theater productions and countless hours in the costume workshop later, he will graduate this fall with a degree in theater.

Walking around the costume stock room Tuesday, Coggins paused at baroque gowns and modern windbreakers he constructed for theater productions at the university.

He’ll likely be gone before the proposed cuts land on the department. But he wondered what was going to happen to other students who may have wanted to join the program.

“I don’t want to be part of the last group of people who get to be loved the way this place has loved me,” he said.

A full list with the status of each program is available here.

Are you a student, researcher, faculty or staff member who will be affected by the proposed cuts? Email reporter Michelle Theriault Boots at mtheriault@adn.com.