With elections looming, Alaska faces a shortage of poll workers because of COVID-19 concerns 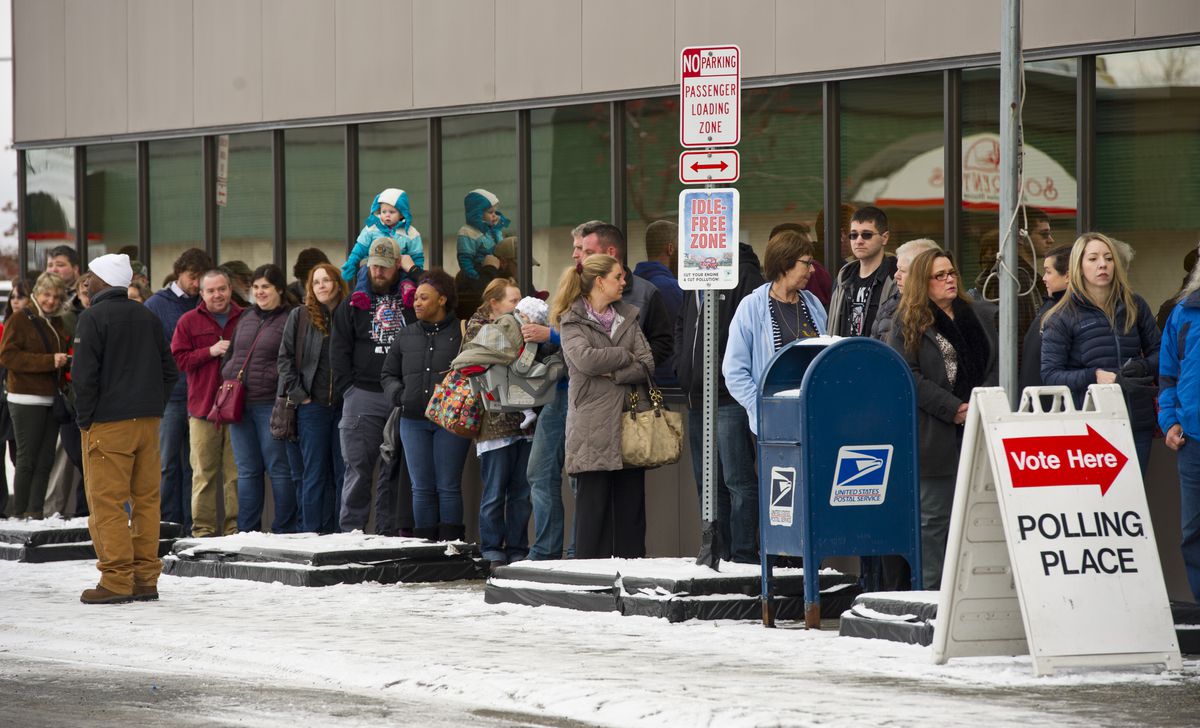 Voters waited in a line outside the Alaska Division of Elections office on Monday, Nov. 7, 2016. (Marc Lester / ADN archive)

Voters waited in a line outside the Alaska Division of Elections office on Monday, Nov. 7, 2016. (Marc Lester / ADN archive)

A pandemic-caused shortage of election workers has state and local officials searching for solutions and warning that they could close some polling sites if the situation doesn’t improve.

Alaska will see two statewide elections in coming months and some communities will have three: The statewide primary on Aug. 18; municipal elections across much of the state, but not Anchorage, on Oct. 6; and the Nov. 3 general election.

Two months before the statewide primary, none of the state’s House districts have enough election workers.

The shortage is particularly severe in Anchorage and the Matanuska-Susitna Borough. Of the 12 polling places in the state House districts that cover Chugiak and Eagle River, none had signed a full staff of workers by Friday, according to Division of Elections statistics.

“Both the state and Mat-Su borough need more election officials in November,” said Lonnie McKechnie, municipal clerk for the Mat-Su borough, which runs local elections in tandem with the statewide vote.

At the state level, election workers are paid $12 per hour, but it’s a temporary job — 14 hours on Election Day and a few hours of training before that.

“Most of our workers were people retired that just wanted to help out our community and our state,” said Lt. Gov. Kevin Meyer, who oversees the state’s elections.

Elderly Alaskans are particularly vulnerable to COVID-19, experts say, and when the pandemic began, they began isolating themselves.

Ninety-five percent of the municipality’s regular election workers declined to help this year, city clerk Barbara Jones told the Anchorage Assembly. Five of the city’s six in-person voting locations were closed. Even though most ballots were cast by mail, the city needed to use regular municipal employees to process those votes because there were so few workers.

Ember Jackinsky helped with the 2019 Anchorage election but stayed home this year.

“For me, it was just the idea of — you’re handling something that every other person in Anchorage has handled, postal workers had handled,” she said.

A Native artist, Jackinsky said she’s having to reevaluate the way she does things during the pandemic, and she knows she’s not alone.

“The majority of us are either high-risk because of advanced years or because of underlying medical conditions,” she said of her fellow poll workers.

‘Quite an army’ needed

Anchorage’s by-mail system limits the need for staff, but Meyer has ruled out conducting the state’s Aug. 18 primary by mail.

That means the state still needs to staff 441 polling places and dozens of review boards after the election.

Gail Fenumiai, director of the Alaska Division of Elections, said the state needs anywhere between 2,500 and 3,000 temporary workers during the primary and again during the Nov. 3 general election.

“It’s quite an army that’s required to put on,” she said.

Seven polling stations have already been covered by the program.

The state is also asking its other employees to help. Any state worker can ask to work a polling place on Election Day and will receive their regular salary for the day.

Meyer said the downside is that the employee has to work 14 or 16 hours instead of the normal 7.5-hour workday, but Fenumiai said about 350 workers have already signed up.

Mailed votes not mandatory, but encouraged

The state is also encouraging Alaskans to cast absentee ballots by mail instead of going to the polls. Under state law, any Alaskan can request an absentee ballot for any reason and vote by mail.

Right now, the state’s process requires printing out a request form and physically mailing it in, but Fenumiai said the state is preparing a new system that allows Alaskans to sign up electronically. That is expected to launch before the primary.

Meyer said the state is also planning to physically mail absentee-ballot request forms to every registered voter who is at least 65 years old.

“They are in the vulnerable group,” he said, speaking about the effects of the coronavirus.

He and his chief of staff, Josh Applebee, said older Alaskans are less likely to be technologically savvy and interested in an online application. They said they don’t see it as special treatment, but as a way to reach the widest number of Alaskans.

“Why not just send an absentee application out to everyone?” he said. “There’s other people who are vulnerable and shouldn’t be going to the polls — people with underlying health conditions.”

In 2018, older voters participated in Alaska’s election at much higher rates than younger voters, and if more Alaskans cast votes by mail, that could reduce the number of people who vote in person, allowing greater social distancing at the polls.

National polling indicates that older voters tend to favor conservative causes and candidates more than younger voters do, but Meyer’s chief of staff, Applebee, said he doesn’t think there’s “anything in the statistics to suggest that’s true in the state of Alaska.”

Local officials are also considering their options. Cities and boroughs don’t get help from the state during their local elections, which means each must come up with a solution for the worker shortage independently.

In the Matanuska-Susitna Borough, local officials are facing a particularly acute shortage of poll workers because the local election is on the same date as the November general election.

“On a normal election, with all precincts open, we need 164 workers. At this point, we have 80+ applications,” said McKechnie, the local clerk.

After the borough’s elected officials turned down a mandatory vote-by-mail program, McKechnie is planning to send out absentee ballot requests to every registered voter in the borough, similar to the state’s program, but larger.

If all else fails, some standard polling places will be open.