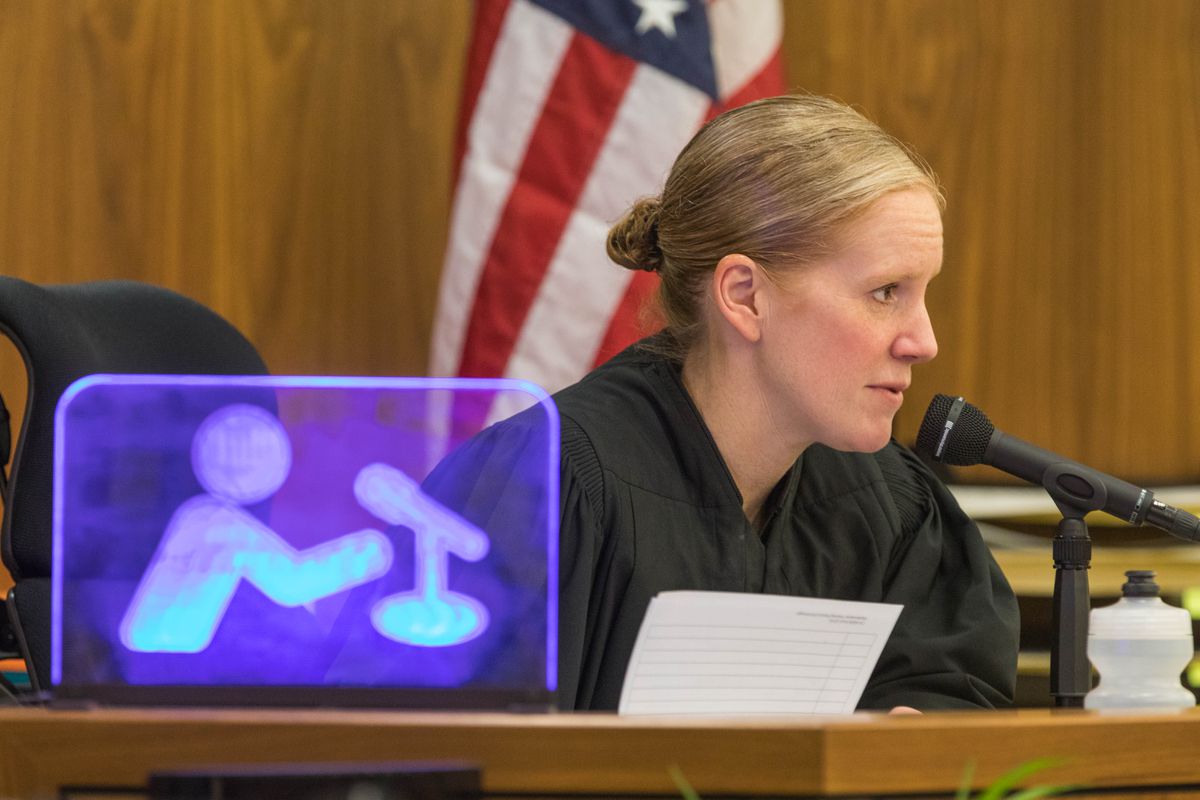 Judge Jennifer Henderson presides over a hearing in 2016 at the Boney Courthouse in Anchorage. Henderson has ordered the state to stop printing general-ballots, at least temporarily. (Loren Holmes / ADN file)

Judge Jennifer Henderson presides over a hearing in 2016 at the Boney Courthouse in Anchorage. Henderson has ordered the state to stop printing general-ballots, at least temporarily. (Loren Holmes / ADN file)

A state judge has ordered the Alaska Division of Elections to stop printing ballots for November’s general election and could extend that decision into an order that requires the state to reprint as many as 800,000 ballots before the Nov. 3 general election. The Alaska Supreme Court, meanwhile, could hear the matter on an emergency basis Friday afternoon.

On Thursday, Anchorage Superior Court Judge Jennifer Henderson said a new ballot design, disclosed to the public Sept. 10, may violate state law and the state constitution. The new design does not list what political party — if any — that a candidate belongs to.

“The Division of Elections has included this ‘party affiliation’ information on prior ballots since 2018, and has not thus far asserted any meaningful or cogent reason for not including this information on the current general election ballot,” Henderson wrote in a temporary restraining order that prohibits the state from printing the new design.

The order was a partial win for U.S. House candidate Alyse Galvin, who objected to the removal of candidates' political registrations and filed suit, but the state has already printed 800,000 of the new ballots and is planning to mail as many as 11,500 on Friday to registered Alaska voters living overseas. It has paused those plans for now.

Galvin’s lawsuit asks that the state restore the status quo that existed before the design change. That would require reprinting ballots, but Henderson has not yet required the state to take that step. She has ordered Galvin’s attorneys and those representing the state to submit additional written arguments, and Henderson has scheduled an additional hearing for 10:30 a.m. Friday.

In documents published ahead of that hearing, the state says that if Henderson orders ballots reprinted, it cannot follow a federal law that requires absentee ballots be sent overseas no later than Saturday.

The federal law contains a clause that allows the state to request a deadline extension in case of legal dispute. The state did not answer a question asking whether it had requested an extension.

The state also says it may be impossible to reprint all the ballots and reprogram voting equipment in time for other absentee ballots to be sent in October, for early voting to begin Oct. 19, and for the general election Nov. 3.

Responding to a request from the state, the Alaska Supreme Court said it will not interfere in Friday morning’s hearing, but the justices will be prepared for arguments on Friday afternoon if either side challenges Henderson’s morning decision.

Galvin is one of five independents who won Democratic primaries this year, but under the new design, she is identified only as “Democratic nominee." In 2018, ballots also listed her voter registration, “U,” signaling undeclared.

Critically, the design change was made in June but only became widely known this week, after ballots had already been printed and only five days before the deadline to send them to voters overseas. That has put the state hard up against the deadline in federal law.

“Galvin’s personal voter registration affiliation as non-partisan, and formerly as undeclared, has been an important part of her identity, her campaign platform, and her relationship with her supporters,” her lawsuit says.

“Upon information and belief, defendants made this eleventh-hour change to inappropriately affect the outcome of the election by misleading and confusing Alaska voters and depriving them of essential information,” Galvin’s lawsuit says.

The state denies that accusation, calling it “serious and unfounded” in a written response.

Republicans won control of the state’s executive branch in 2018, and Republican Lt. Gov. Kevin Meyer has been in charge of the state’s elections since then. The ballot-design lawsuit follows others dealing with the language of ballot measures and the handling of absentee ballots. In one case, a judge said Meyer put "his finger on the scales” by incorrectly describing the state’s oil-tax ballot measure. In another, a judge upheld the state’s actions. (That decision has been appealed.)

“I am increasingly concerned about the ability of the Lt. Governor to make informed, unbiased, decisions about the election, and of the integrity of those running the DOE. Alaska voters, especially the majority of those voters who are undeclared and non-partisan, need to call bullshit,” Alaska Democratic Party director Lindsay Kavanaugh said Monday.

Since Galvin filed her lawsuit, two state House candidates have expressed their support. Scott Kohlhaas is a Libertarian candidate for House District 16 in Anchorage and reached the ballot by petition. The new ballot design leaves him labeled “petition nominee” only, with no reference to his Libertarian registration.

“I am prepared to litigate to protect the rights of the Libertarian Party to properly designate its candidates, if necessary,” he wrote in a letter to the Alaska Division of Elections.

Stephen Trimble, an independent candidate for House District 22 in Anchorage, said he also supports the lawsuit. Unlike Galvin, he is not a Democratic nominee. Like Kohlhaas, he would be listed as “petition nominee,” a change he opposes.

“Just appearing as a petition nominee seems like it is a big disadvantage,” he said. “I don’t think a lot of voters understand what that term really means.”

State law says candidates must be identified on the ballot with both their “party affiliation” and their “party designation.”

Until 2018, the Division of Elections interpreted those two terms as meaning the same thing. Candidates on the general election ballot were labeled by the party that put them on the ballot or as “non-affiliated” if they gathered enough signatures to be placed on the ballot independently. (That is the method Kohlhaas and Trimble used this year.)

In 2018, the Alaska Supreme Court ruled that independents can run in a party primary, if the party allows it. The Alaska Democratic Party had sued for the right to do so.

In response, the Division of Elections changed the ballot to show both how a candidate was registered and whether they were endorsed by a party.

According to a state attorney, the Division of Elections reviewed the choices it made in 2018 and looked to a sentence from the 2018 Supreme Court decision: “On the general election ballot, the state could simply print the nominating party’s name next to the candidate’s name.”

That sentence, combined with prior practice before 2018 and concerns about the width of the ballot, led the division to revise the ballot’s design in June, eliminating the candidates' registration information.

In a written statement, the Alaska Division of Elections said it believes the most important information for voters to know is how a candidate reached the ballot, and that it removed the candidates' registrations “to avoid voter confusion.”

Henderson, who was appointed a district court judge by Republican Gov. Sean Parnell and a superior court judge by independent Gov. Bill Walker, didn’t agree with those arguments.