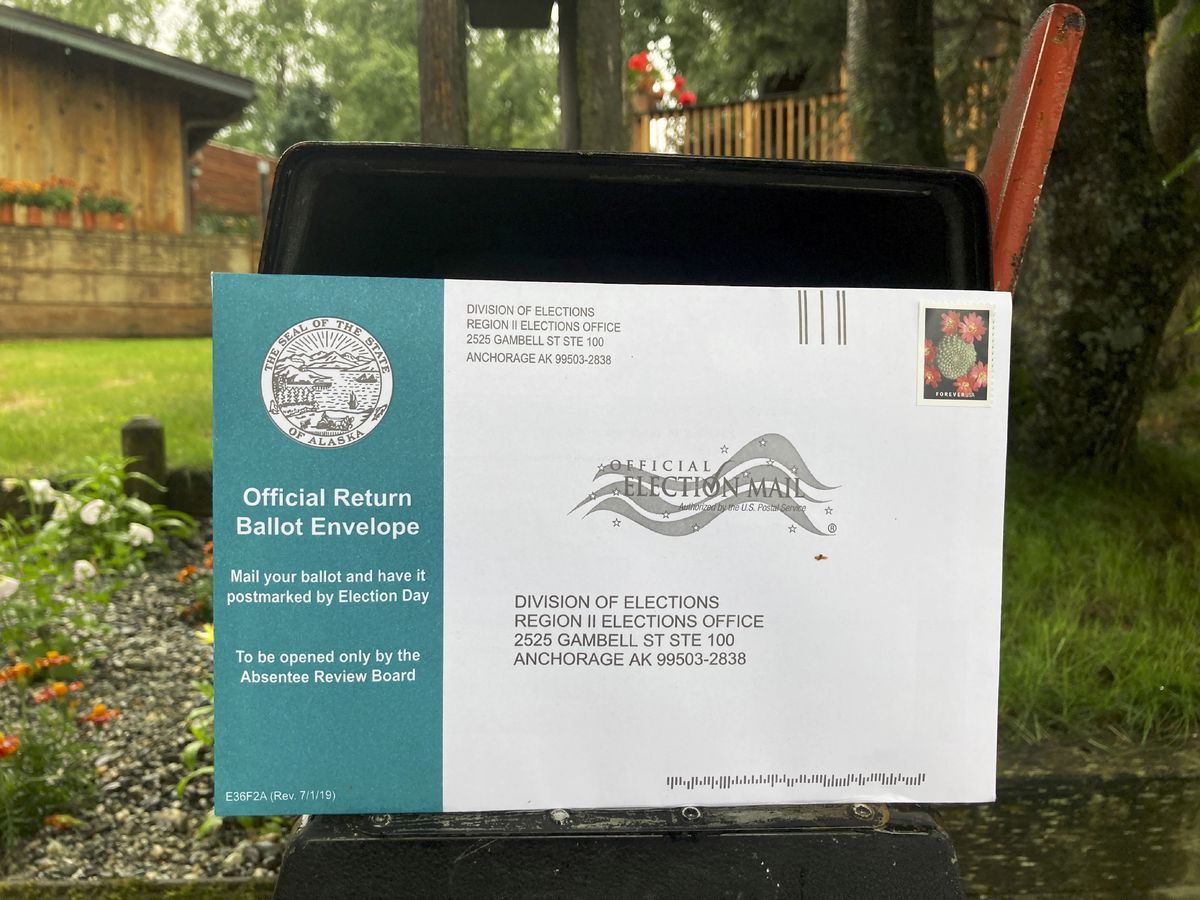 This Tuesday, Aug. 11, 2020 photo shows a completed Alaska Primary absentee ballot before it was put inside a mailbox in Anchorage. (AP Photo/Mark Thiessen)

This Tuesday, Aug. 11, 2020 photo shows a completed Alaska Primary absentee ballot before it was put inside a mailbox in Anchorage. (AP Photo/Mark Thiessen)

Three civil rights groups filed a lawsuit in state court Tuesday against the state of Alaska over a state law that requires absentee voters to have a witness sign their ballot envelope.

The groups, which include the ACLU of Alaska, the Native American Rights Fund and the Lawyers Committee for Civil Rights Under Law, say keeping the requirement during the COVID-19 pandemic forces some Alaskans to choose between voting and their health.

The groups are suing on behalf of the Arctic Village Council, the League of Women Voters and two older women who have compromised immune systems. In a legal complaint filed Tuesday, they’re asking an Anchorage superior court judge to suspend the law during the pandemic.

“We’re just not asking for that much, and it should be doable, especially during a pandemic when the burden on the right to vote is so high,” said Pooja Chaudhuri, an attorney representing the Lawyers Committee.

Maria Bahr, an attorney with the Alaska Division of Elections, said the state’s lawyers will need some time to evaluate the complaint.

This is the second significant lawsuit against the Division of Elections this year over absentee voting. In the first, a federal judge rejected an order that would have required the state to send absentee ballot request forms to all registered voters. (The suit is now being appealed to the 9th Circuit Court of Appeals.)

Unlike the first suit, he lawsuit filed Tuesday deals with what happens toward the end of the absentee voting process, when ballots are counted.

Alaska is one of 11 states where absentee voters must have a witness sign their ballot. Two of those states, Rhode Island and Minnesota, suspended their requirements following separate lawsuits.

[Want to vote by mail? Here’s what it takes in Alaska.]

The second signature, known as the “witnessing requirement,” is the No. 1 reason why some absentee ballots are not counted.

In the just-ended primary election, 456 absentee ballots were discarded by the Alaska Division of Elections for “improper or insufficient witnessing.” (Altogether, 1,240 ballots were rejected for all reasons.)

Last week, the three groups behind Alaska’s lawsuit asked the state to voluntarily waive the law. Lt. Gov. Kevin Meyer said it was outside his power to do so.

While the lieutenant governor lacks the power to waive state law during an emergency, Gov. Mike Dunleavy does have that power and has used it repeatedly during the pandemic. Earlier this year, he suspended a range of laws, including those pertaining to tax deadlines and the home delivery of beer and wine.

“Witnessing could also take place through a window if necessary,” he wrote.

Turnout in the Nov. 3 general election is expected to be triple the turnout of the Aug. 18 primary, and in their court filing, the groups say they expect proportionally more votes to be rejected if the signature law is not suspended.

The lawsuit has been assigned to Judge Gregory Miller, and no hearing date has been set. Chaudhuri said the groups will ask to be heard quickly.

Alaskans can request absentee ballots online. The first blank ballots are scheduled to be mailed to overseas Alaskans starting Sept. 18. Ballots will be sent to voters in the Lower 49 and Alaska starting in October.