Both sides of the Ballot Measure 1 debate say voting with them will save the PFD. Here’s what’s behind those arguments. 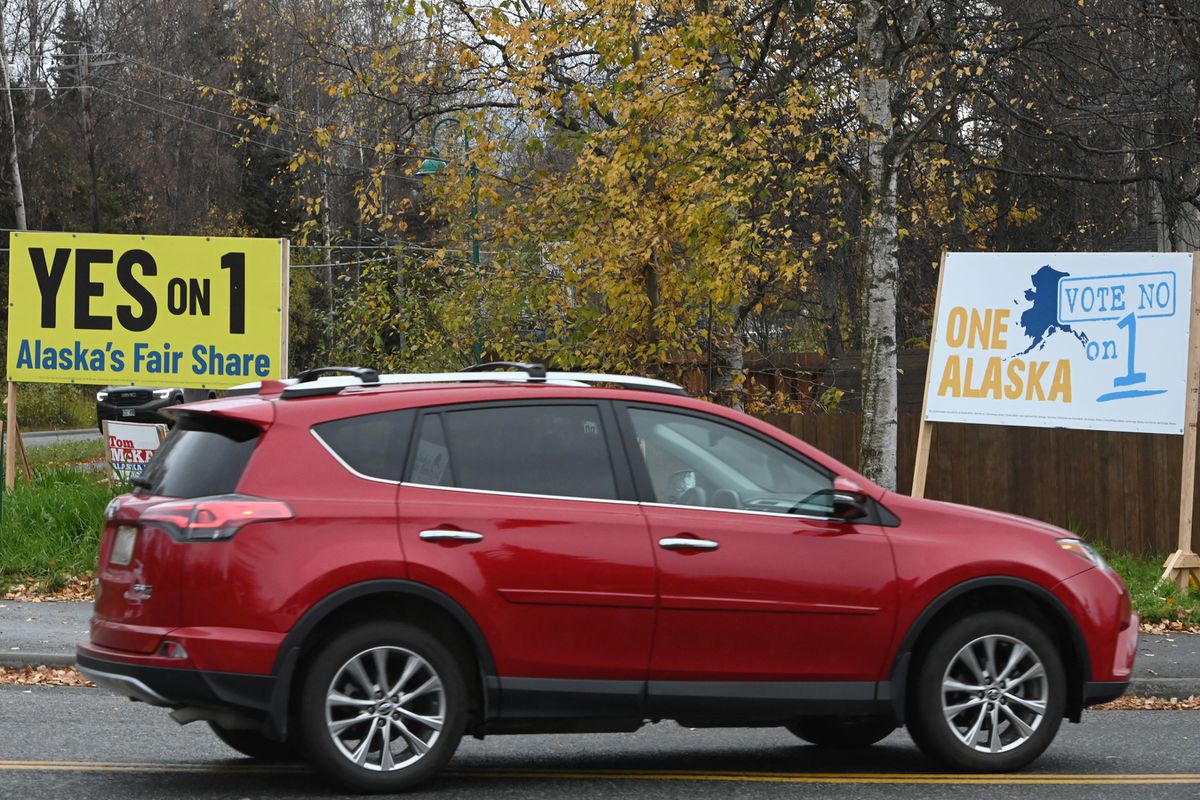 Dueling Ballot Measure 1 campaign signs in South Anchorage urge voters to decide during the General Election on Nov. 3 if the state should boost oil production taxes on the North Slope. (Bill Roth / ADN)

Dueling Ballot Measure 1 campaign signs in South Anchorage urge voters to decide during the General Election on Nov. 3 if the state should boost oil production taxes on the North Slope. (Bill Roth / ADN)

Both sides debating a citizen-led measure to boost oil taxes argue that voting with them is the best way to protect your Alaska Permanent Fund dividend.

Election Day is Nov. 3, but absentee voting is already underway and early voting starts this week.

Mouhcine Guettabi, an economist with the Institute of Social and Economic Research at the University of Alaska Anchorage, said a big question is the impact of higher taxes on future production.

“And that’s an incredibly difficult question to answer,” he said.

Taxes typically aren’t seen as “expansionary,” or resulting in economic growth, he said. The current pandemic-driven slump makes it a challenging time to think about raising taxes, he said.

On the other hand, the state anticipates a $900 million deficit next year, even if it pays only a partial dividend of about $1,000.

If oil prices stay low, the measure doesn’t come close to bringing in the revenue to support a full dividend approaching $3,000, of the sort paid under the traditional formula before 2016, Guettabi said. That would push the state deficit to $2.4 billion.

The anticipated deficit could be filled with past earnings from the Permanent Fund, but that would shrink the fund’s earning potential.

Starting in 2016 with former Gov. Bill Walker, and followed by the Legislature, the state has sharply reduced the dividend payments to help pay for state services amid large deficits.

At low oil prices, Ballot Measure 1 could increase Alaska tax revenue by about $300 million next year, Guettabi said, citing a state forecast based on this year’s prices and production.

Oil prices have lately hovered around $40 a barrel. The ballot measure, if it passes, would take less from the three oil companies if the current, lower prices continue. Its tax rate would rise with higher prices.

He said Senate Bill 21, the existing law that the ballot measure would amend, has created a revenue crisis for Alaska because production taxes have fallen so low. He asserted that the law has cost each Alaskan about $7,000 in Permanent Fund dividend reductions since 2016, while the oil industry receives huge subsidies such as the per-barrel credits the Fair Share Act would eliminate. With huge deficits looming, future dividend payments face severe risk if Senate Bill 21 remains unchanged, Wielechowski said.

“It’s a simple function of math,” he said.

Wielechowski said that if oil prices rise, the Fair Share measure could raise more than $1 billion a year, based on a five-year review provided by the Vote Yes group. The extra income, from higher-price years like those in 2018 and 2019, would provide a cushion to help the state weather years of lower oil prices, he said.

ConocoPhillips, Alaska’s leading oil producer, has said the measure would likely force it to significantly scale back drilling at new projects.

“There is no way that Ballot Measure 1 helps preserve the PFD, and if people want to have a PFD long-term, they should vote no,” Moriarty said.

Moriarty said the Legislature and the governor, not the oil industry, determine the size of the dividend.

“Vote Yes is trying to create this narrative that Senate Bill 21 and the oil industry are the reason you’ve lost thousands of dollars of dividends, and there’s nothing accurate about that statement whatsoever," she said.

She said oil prices that cratered in 2016 and 2017 sharply reduced state income, contributing to the state’s decision to begin reducing the dividend.

If Alaska had a broader mix of state revenue sources, atop the large amounts it has raised from the oil industry, more money would have been available to prevent the dividend from being cut, she said. The oil industry is the state’s largest source of private sector revenue, she said.

“If there was more money from fishing and tourism, and the cruise ship industry, and if there was a state sales tax and personal income tax and higher oil prices, there would have been more money for the state to spend,” she said.

She said IHS Markit, an analytics firm, recently released a report showing that Alaska’s competitiveness already ranks low compared to other oil regions. It will get worse if the ballot measure passes, she said.

Wielechowski doubted the credibility of the report. He said the study was prepared for the American Petroleum Institute, the national trade group for the oil industry. The group’s members include ExxonMobil and ConocoPhillips.

Wielechowski said investment in the oil patch should remain steady if the Fair Share proposal passes, in part because of its limited approach. It targets Prudhoe Bay, owned by three top oil producers, and the Kuparuk and Colville units owned by ConocoPhillips. He said the fields are lucrative. Additional state income can lead to the creation of new state jobs, he said.

ConocoPhillips, the only company of the three top producers to provide annual reports to federal regulators breaking out Alaska earnings, is extremely profitable in Alaska, he said.

The company reported earning $1.6 billion annually in Alaska, averaged out over the last three years, according to the company’s latest annual report to the U.S. Securities and Exchange Commission.

ConocoPhillips has said it invests much of its earnings back into Alaska. The company reported investing $1.2 billion in capital spending in Alaska annually, on average, during the same period.

The company in the first half of this year has reported losing $1.5 billion worldwide, including $60 million in Alaska, amid the price slump. Opponents of the tax increase have said with the economy facing widespread unemployment, now is not the right time to increase taxes on the industry.