Sanitized pens and windy waits in the cold: Alaska finally votes, with no major problems reported 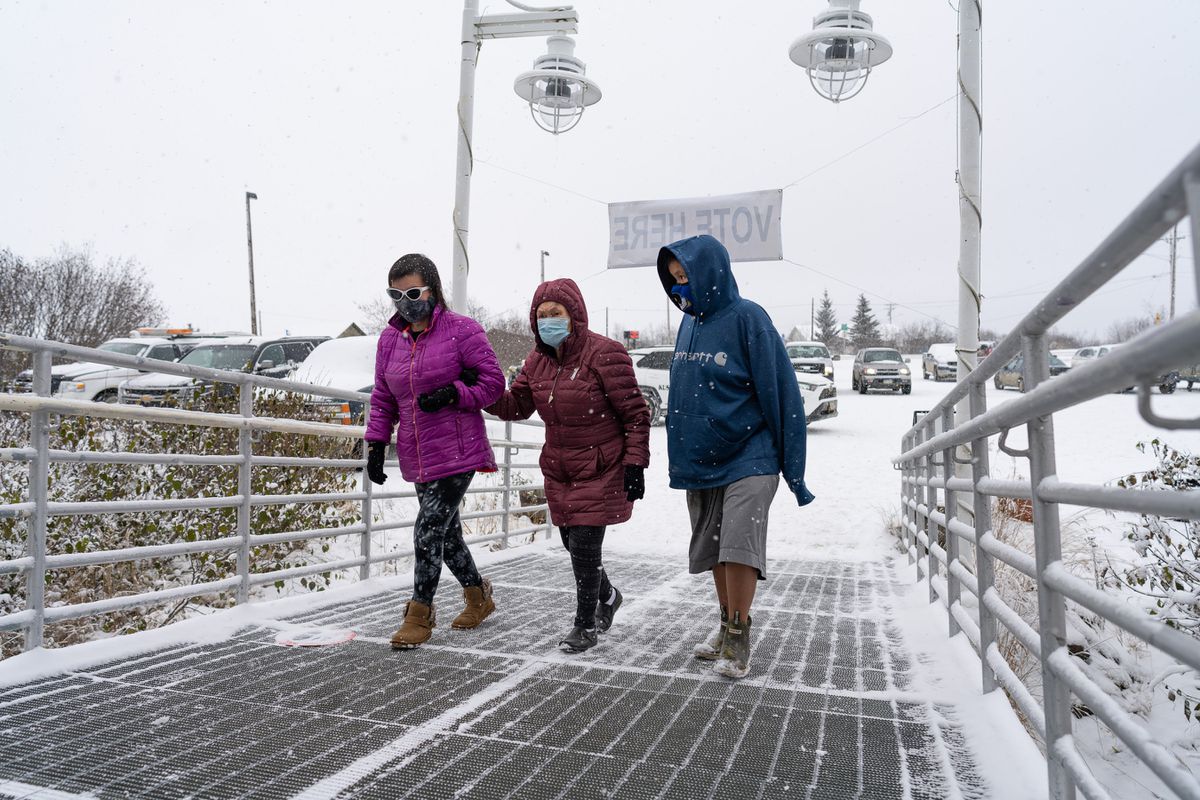 Bethel voters make their way to the polls through a blizzard on Nov. 3, 2020. (Katie Basile / KYUK)

Bethel voters make their way to the polls through a blizzard on Nov. 3, 2020. (Katie Basile / KYUK)

As polls headed toward closing at 8 p.m. Tuesday, state elections officials said they hadn’t received any reports of significant problems.

“Everything seems to be running pretty smoothly,” said Tiffany Montemayor, a spokeswoman for the Alaska Division of Elections.

A few glitches surfaced through the day as voters at scattered polling places reported jammed ballots or confusion about eligibility. Poll watchers nationally said that was to be expected with a historic election combining heavy turnout, higher than usual numbers of provisional ballots, and the added pressure of COVID-19 safety protocols.

One Alaskan community didn’t vote in person at all because of coronavirus concerns: Clark’s Point near Dillingham, where one resident described some frustration, saying she didn’t expect to not be able to turn in a ballot and did not vote absentee.

In the Yukon-Kuskokwim Delta community of Chevak, voting worked a little differently this year. The village is under a lockdown after roughly a quarter of community members tested positive for COVID-19 last month.

Chevak mayor Richard Tuluk said the unique situation prompted officials to announce voting plans through a radio public service announcement: Anyone who had tested negative for COVID-19 could vote between 8 a.m. and 7 p.m. on Tuesday. The final hour of voting was reserved for people who were in quarantine.

People with positive COVID-19 cases in their household could download a form and either fax or mail in their ballots, Tuluk said.

The mayor could see people walking to the polls as he spoke.

Anna Ashenfelter, 30, and her husband took time off work Tuesday to vote at St. Joe’s Hall in Nome. There was a few inches of snow on the ground, a nice break from the freezing fog and rain.

It was a rare outing for the couple, given months spent trying to follow COVID-19 protocols. Both of Ashenfelter’s parents, normally in-person voters, mailed in ballots out of safety concerns.

“We’re not really around this many people,” Ashenfelter said. Poll workers handed out masks if voters needed and took extra precautions.

Generally, reports from voters around the state described longer lines than usual as the day started, with slow but steady turnout through the day, and longer lines again after people got off work.

One Mat-Su voter who turned out in frigid conditions at 7:15 a.m. at Wasilla’s City Hall described taking turns with others in line to block the wind for an older voter as they all waited for space to open inside. Voters in Homer and Fairbanks described their experience as fast, organized and drama-free.

Lines were consistent all day in Kotzebue at the Northwest Arctic Borough Office with lines extending outside, according to Mayor Lucy Nelson. Inside, just 10 people at a time were allowed inside to vote under COVID-19 protocols.

There was a line to vote around lunchtime in Unalakleet and Laureli Ivanoff, 42, was happy about it. Never in her many years of voting in Unalakleet had there been a line, Ivanoff said, though she waited only 10 minutes to vote.

Everyone stood six feet apart and poll workers had masks available and wiped down surfaces after each person voted.

Sarah Elliott, 35, voted in Haines at the Alaska Native Brotherhood and Sisterhood building, a short drive from her home about 40 miles from the border with Canada. She said she felt relatively sheltered from COVID-19 concerns by the community’s isolation.

The election worker recognized Elliott, who works for Big Brothers Big Sisters of Alaska. After all, Haines is a community of about 1,900 people.

Elliott ended up waiting in a brief line -- with four people ahead of her.

“And that was like the longest I’ve ever had to wait in my entire life of voting,” she said.

In a windy Cold Bay, Candace Nielsen was working the polls Tuesday afternoon in the community of about 60.

It wasn’t her first gig as a poll worker, but this election is historic, the 29-year-old librarian said. The moment feels big.

“I think this will be something we’ll just always remember -- this day and how things turn out either way,” Nielsen said. “And it feels good even though I live out in rural Alaska, that we can have a polling place and offer a place for people to vote.”

Correction: This story has been updated to reflect the fact that Clark’s Point was the only Alaskan community that did not conduct in-person voting on Tuesday due to coronavirus precautions.