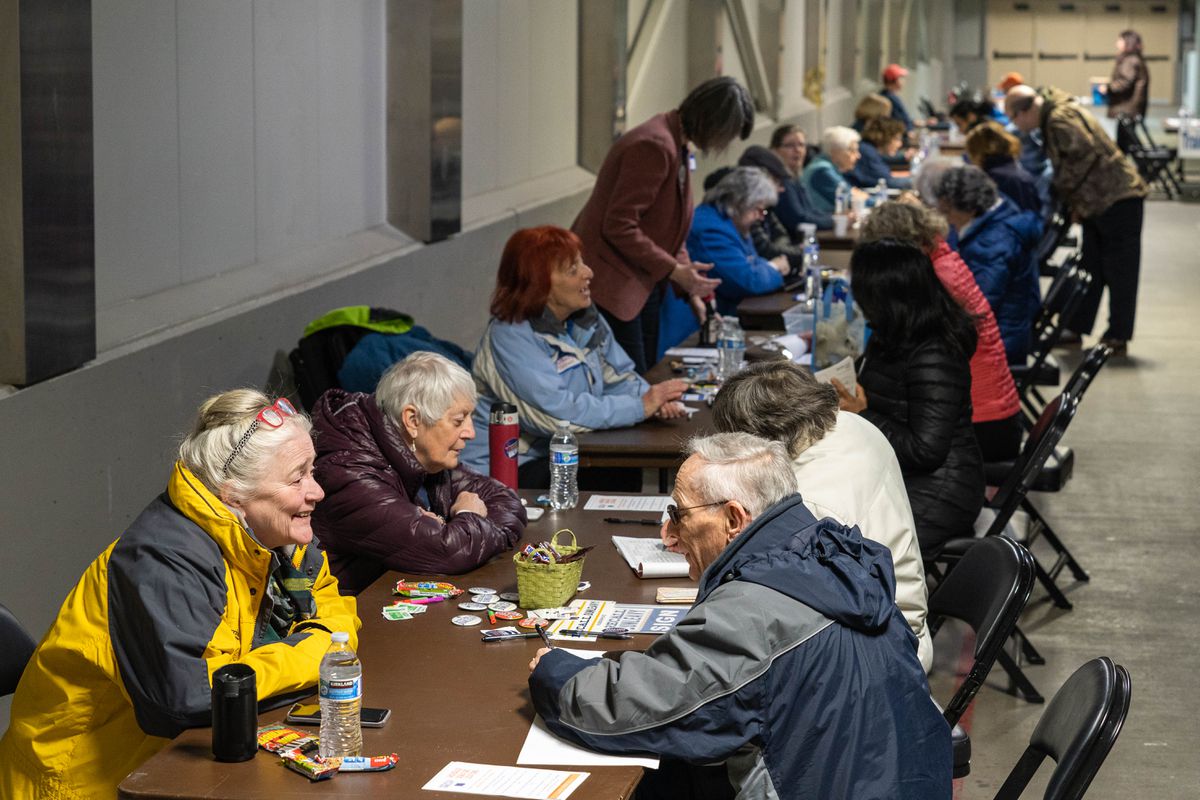 Susan Reilly, wearing a yellow coat, and other volunteers collect signatures for the Recall Dunleavy group on Saturday, Feb. 29, 2020 at the Sullivan Arena in Anchorage. One year since signature-gathering began, backers have about three-quarters of the support they need to force a statewide vote. (Loren Holmes / ADN)

Susan Reilly, wearing a yellow coat, and other volunteers collect signatures for the Recall Dunleavy group on Saturday, Feb. 29, 2020 at the Sullivan Arena in Anchorage. One year since signature-gathering began, backers have about three-quarters of the support they need to force a statewide vote. (Loren Holmes / ADN)

Campaigners supporting the recall of Alaska Gov. Mike Dunleavy have gathered more than three-quarters of the signatures needed to force a statewide vote on the governor’s tenure, they said.

Such a vote could take place as soon as this summer, but the exact date depends upon when the signatures are submitted and when those signatures are processed by the Alaska Division of Elections.

Meda DeWitt, chair of the group seeking the governor’s recall, said that as of Thursday, the group had “55,613 signatures with 15,639 left to collect.”

State law requires the group to obtain the signatures of at least 71,252 registered Alaska voters, and the pace of signature-gathering appears to be picking up after a pandemic-caused lull. On Feb. 9, the group had reported having just over 50,000 signatures, only about 10,000 more than it did in June 2020.

To cope with the pandemic last year, the recall group started a program allowing Alaskans to sign the recall at home, using signature-pages mailed to individual supporters, but DeWitt said that strategy required “many more steps and a great deal more time than traditional signature-gathering.”

She also said that signature-gathering took a backseat to Alaskans’ immediate needs during the pandemic.

“Now that Alaskans are receiving vaccinations and safety precautions are well-understood, their attention is once again focused on holding Gov. Dunleavy accountable for his ongoing pattern of illegal behavior and mismanaging the state at the expense of the Alaskan people,” she said.

In early February, the group said it was “rebooting” its campaign, and since then, signature-gatherers have returned to many Anchorage storefronts.

“We have 12 signature-gatherers working seven days a week in Anchorage and the immediate vicinity with the possibility of expanding into Fairbanks in the near future,” DeWitt said.

This month marks one year since the Alaska Supreme Court allowed signature-gathering to begin, and next month will mark two years since a “Recall Dunleavy” banner was unveiled during an Anchorage town hall meeting hosted by the governor.

Since then, the governor has retreated from the severe budget cuts that prompted the recall, many administration officials have been replaced, and the state’s response to the COVID-19 pandemic has generally been successful when compared to the responses of other American states.

But DeWitt said the recall still has relevancy because Dunleavy has a “pattern of illegal behavior,” and she referenced a recent court ruling that found the governor’s administration violated state law, the Alaska Constitution and its contract with the state’s largest public-employee union.

She said “two successive attorney general scandals” and the abrupt end of Alaska’s COVID-19 emergency demonstrate that the administration still needs to be held accountable.

“Finally, let’s remember that it has been the recall effort itself that is responsible for any tempering of Governor Dunleavy’s policies. The governor stopped brandishing his red pen and softened his tone pretty quickly after the recall launched. So, the recall isn’t only relevant, it’s a factor in how Alaska is being governed,” she said.

Asked for comment, the governor’s office had a different perspective.

“The governor is doing what he was elected to do and firmly believes his record will withstand any recall effort,” it said in a written statement. “While the recall group is focused on politics, the governor is focused on navigating Alaska during one of the worst crises in the state’s history. Having the second best vaccination rates in the country, the governor is focused on the safety of seniors and all Alaskans during the pandemic. Gov. Dunleavy will continue to fight for the full PFD and push forward capital budget projects which will stimulate the economy and put people to work. Gov. Dunleavy stands by his commitment to Alaskans and continues to move forward on the agenda he believes is best for the state of Alaska and what got him elected in the first place.”

State law does not require the recall group to disclose the sources of its funding until an election is scheduled and a campaign formally begins. DeWitt again declined to say who the group’s top three contributors are but said that the recall is “funded overwhelmingly by the Alaskan people.”

Last year, a group called Stand Tall With Mike formed to oppose the recall. Campaign finance registrations show no such group registered for 2021, and a listing of active political groups did not show a replacement. The chair of Stand Tall With Mike, Lindsay Williams, did not answer a call Friday.

Mary Ann Pruitt, a deputy treasurer for a group supporting Dunleavy’s prospective 2022 reelection campaign, said she is not aware of any activity on the anti-recall side right now.