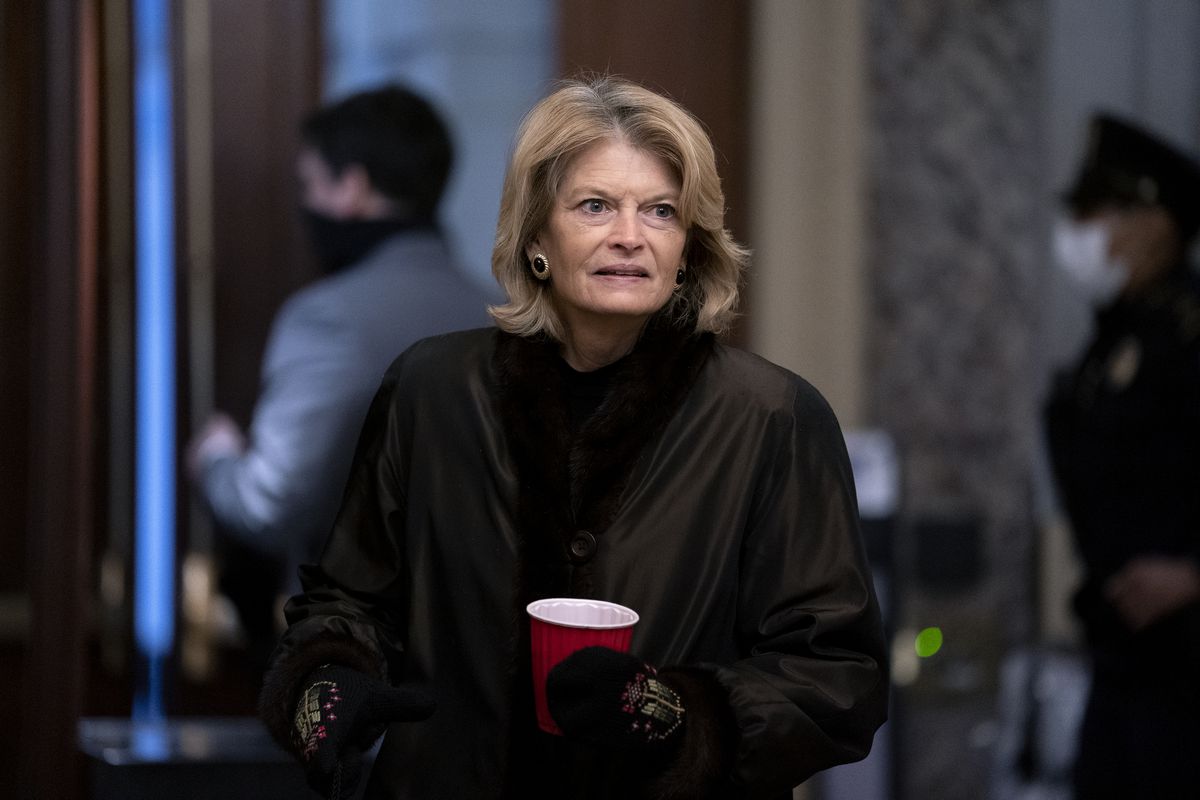 Sen. Lisa Murkowski, R-Alaska, arrives at the start of the fifth day of the second impeachment trial of former President Trump, Saturday, Feb. 13, 2021 at the Capitol in Washington. (Stefani Reynolds/Pool via AP)

Sen. Lisa Murkowski, R-Alaska, arrives at the start of the fifth day of the second impeachment trial of former President Trump, Saturday, Feb. 13, 2021 at the Capitol in Washington. (Stefani Reynolds/Pool via AP)

The Alaska Republican Party has voted to censure U.S. Sen. Lisa Murkowski and will recruit a challenger to run against her in next year’s election.

The Republican State Central Committee voted in favor of the censure during a meeting Saturday in Anchorage after district-level officials passed a series of similar resolutions.

Under party rules, a resolution of censure is just “an official rebuke and disapproval,” but a copy of Saturday’s resolution explicitly states that the party “will hereby recruit a Republican Party challenger to oppose and prohibit Senator Murkowski from being a candidate in any Republican primary to the extent legally permissible.”

“We’re looking for somebody else to be our U.S. Senator in 2022, and somebody who will be more in line with the Republican philosophy,” said Kris Warren, who wrote Saturday’s resolution and serves as the chairman of the Republican Party in an Anchorage House district.

He confirmed the accuracy of the resolution.

The vote was 53-17 in favor of censure, according to three people who attended the meeting.

U.S. Rep. Don Young opposed the censure and voted against it through a proxy. The proxy, former Fairbanks North Star Borough Mayor Rhonda Boyles, said she spoke with Young for about 30 minutes by phone and condensed his remarks into notes that she shared with the central committee.

Paraphrasing, she said he believes that a censure will amount to two days of media coverage, and the truest form of censure comes at a ballot box.

Party chairman Glenn Clary did not respond to a Monday phone call seeking comment, and messages left at the party’s offices in Anchorage were not immediately returned.

“The duty of the State Central Committee is to protect the principles and values of its members. They should take action against any member who breaches the contract assumed when identifying themselves as an Alaskan Republican,” she said in a written statement.

A message left with Murkowski’s press secretary in Washington, D.C., was not immediately returned, but in February, Murkowski was asked about the district-level resolutions of censure.

“I stand my ground. If I had to take that vote again, I would vote to uphold my oath of office,” she said. “And, if the party is to censure me because they felt that I needed to support the party, they can make that statement, but I will make the statement again that my obligation is to support the Constitution that I have pledged to uphold, and I will do that, even if it means I have to oppose the direction of my state party.”

Alaska’s new election system, approved by voters last year, could dilute the impact of the resolution. Alaska no longer has a party-run system in which only one candidate advances to the November election.

Instead, four candidates will advance from the primary to the November general election, and the ballot could list multiple candidates from the same party.

Last week, former President Donald Trump said he will campaign in Alaska against Murkowski next year.

Warren said he submitted the resolution “right after the impeachment vote in the Senate.”

“The party has been upset with Sen. Murkowski for quite some time,” he said. “And we’ve actually considered a similar resolution in the past. But I think what’s happened here in the last few months is kind of kind of the last straw. We felt that we had to make a strong statement.”

“You know, obviously, we like Sen. Sullivan a whole lot more than we like Sen. Murkowski. But you know, we have a few issues with him, too, but nothing so serious,” Warren said.

Correction: Rhonda Boyles is the former mayor of the Fairbanks North Star Borough, not the North Slope Borough.