After US and China talks in Alaska, state leaders get their own chance to meet with top US diplomats 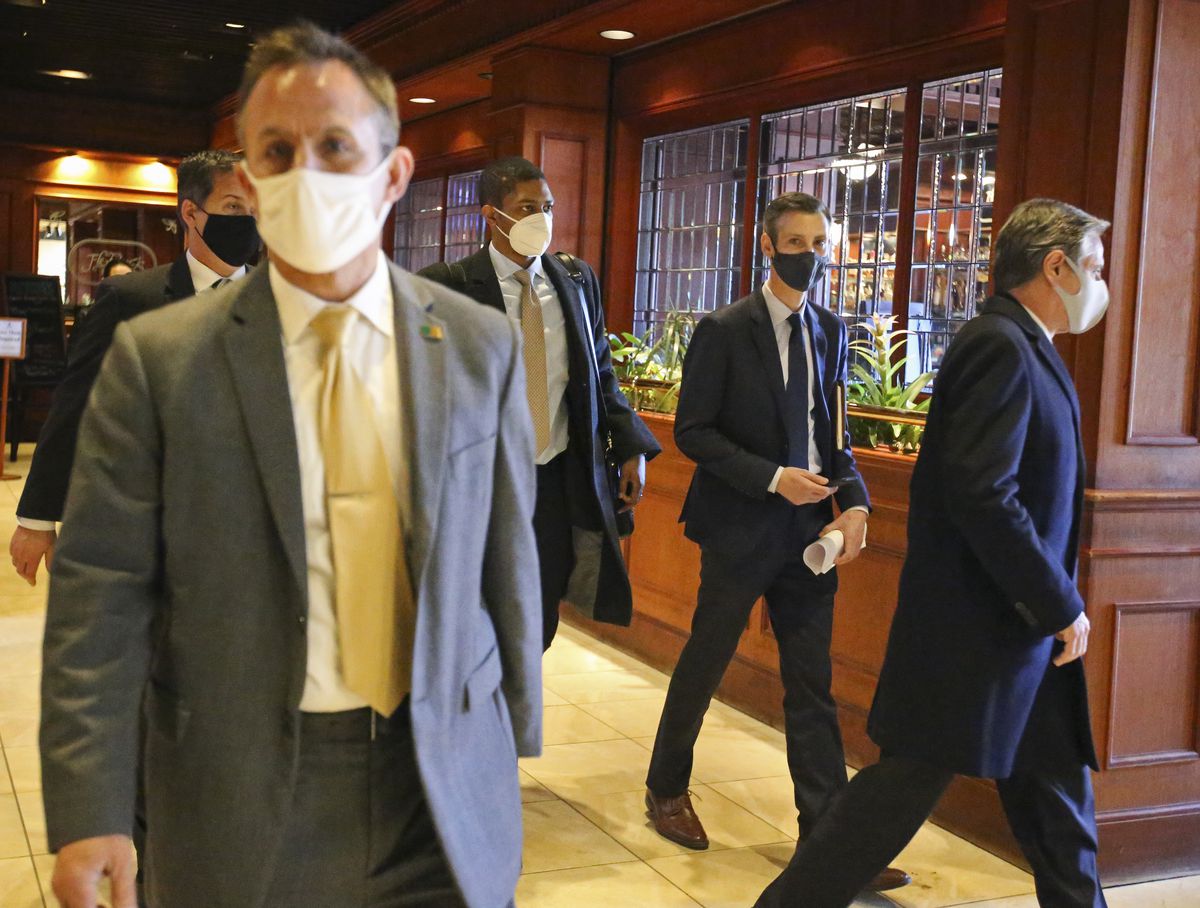 After two days of diplomatic meetings between the United States and China at an Anchorage hotel, two top U.S. officials met with Alaska leaders who themselves have sought stronger ties with President Joe Biden’s administration.

Secretary of State Antony Blinken and National Security Adviser Jake Sullivan sat down with Alaska U.S. Sens. Lisa Murkowski and Dan Sullivan in a Hotel Captain Cook conference room for more than an hour after the U.S. talks with China ended Friday.

Later in the day, Blinken had a phone conversation with Gov. Mike Dunleavy.

Among other topics, the senators and Dunleavy touted Alaska oil and gas resources as an opportunity to enhance the nation’s energy security, they said. They also said they reminded the U.S. leaders not to forget Alaska as the site of rare-earth minerals used in computers and other hi-tech devices.

“We reminded the secretary that Alaska is a solution to the problem of relying on foreign nations such as China for rare earth elements,” Dunleavy said in an interview. “And there’s no need to go oversees since here in Alaska we have a lot of the elements and strategic materials that are needed for lithium batteries and that will lessen our dependence on foreign actors that do not have our best interests at heart.”

All three politicians have criticized Biden’s new restrictions on oil and gas development.

Dunleavy, who has also criticized the Biden Administration’s lack of communication, said he pressed Blinken on the need for future meetings with administration officials.

The senators, in an interview following their meeting with Blinken, said they pressed the U.S. officials for changes to Chinese tariffs that have hurt Alaska’s seafood and timber industries. They said they also pushed for support to allow cruise ships to travel to Alaska, currently impossible in part because of Canada’s ban on the ships during the COVID-19 pandemic.

Sen. Sullivan said he agreed with the approach taken by Jake Sullivan to negotiate with China from a position of strength. Sen. Sullivan said that Alaska, with its military capabilities, energy potential and strategic perch near Asia, can help with that approach. He said China will be the biggest geo-strategic challenge the U.S. faces for decades to come.

“Alaska is not just for refueling or for conferences,” Murkowski said. “There is a much bigger role we can play.”

Murkowski said Blinken and Jake Sullivan didn’t share details of the meetings with China. But they briefly touched on the topics discussed, including concerns with trade and China’s human rights.

Murkowski said the initial tense exchange between the two sides, with news media present on Thursday, may have been partly for show. The doors at the hotel’s ground floor conference were closed for some 10 hours of private discussion on Thursday and early Friday.

Blinken and Jake Sullivan suggested that Alaska, midway between Beijing and Washington, D.C, could be the site of future diplomatic meetings involving Asian nations, Sullivan said. No promises were made for a follow-up meeting between the U.S. and China, Murkowski said.

After their talks with the Chinese came to a close, Blinken and Jake Sullivan took no questions from reporters about the substance of the meeting.

But Blinken, as security personnel ushered him out of the Captain Cook hotel to a waiting SUV, told a reporter that his trip to Alaska was “wonderful.”