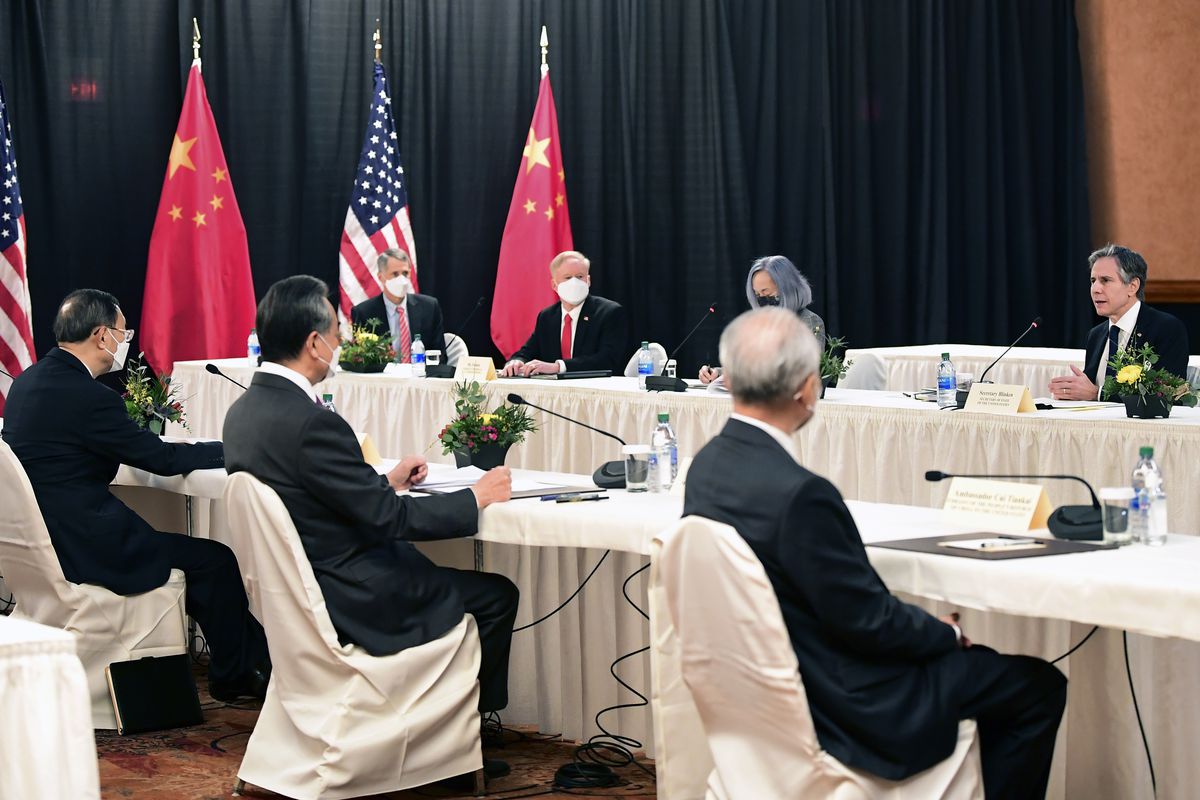 What may be the world’s most important diplomatic meetings this week are taking place in a closed-door conference room in an Anchorage hotel, where top Chinese and U.S. diplomats will address the countries’ tense relations.

But as the talks kicked off Thursday at the Hotel Captain Cook, nothing seemed amiss for many people downtown. The State Department had kept the meeting location under wraps, and the only obvious giveaways were security vehicles and news crews outside the hotel.

Bill Popp, president of the Anchorage Economic Development Corp. in nearby Peterson Tower, said downtown traffic had been pretty quiet.

“I knew they were coming but the location was kept pretty quiet, which is understandable,” he said. “This is high-level diplomacy.”

The meetings are quiet by design, and Anchorage, a relatively small city coming out of a long winter, offered a good meeting spot without a lot of distractions, said Mead Treadwell, a former lieutenant governor who also works downtown near the hotel.

“There’s not a thousand sideshows, like you often get in these summits,” he said. “The biggest difference I’ve seen downtown today is a lot of television crews setting up for beautiful shots of Cook Inlet.”

[In Anchorage, US and Chinese officials spar during first face-to-face meeting under Biden]

State Department officials have told reporters that contentious issues such as trade and China’s human rights positions would be addressed, as well as potential areas of cooperation such as climate change.

Treadwell said an important purpose of the meeting is laying the groundwork for a future meeting between President Joe Biden and Chinese President Xi Jinping.

“I hope this is looked at as a good meeting and both sides think of Alaska again as good place halfway between Beijing and D.C. to get away and talk together to hammer out problems,” Treadwell said.

The meeting attracted international media. The State Department allowed a small group of news organizations that typically cover the agency to observe part of the first meeting Thursday. They entered the room alongside a small group of Chinese journalists. Additional meetings later were closed to coverage.

Concerns about the spread of COVID-19 led to limits on the media, said Nicole Thompson, with the State Department’s press relations office, in an email.

There were no street closures associated with Thursday’s meeting, unlike in 2017 when Xi visited Alaska on his return home to China after visiting former President Donald Trump’s Mar-a-Lago country club.

Xi’s visit involved Alaska-China trade talks at the Hotel Captain Cook, and led to a closure of the Seward Highway as Xi’s motorcade took a Turnagain Arm sightseeing trip. The hotel flew China’s flag off its western roof that day.

No China flag flew on Thursday.

“I know nothing (about the meeting),” Andrew Halcro, head of the Anchorage agency providing public parking services, said on Wednesday before the talks began. “Usually, my parking team is contacted ahead in some form or fashion as we block off roads and parking or whatnot. But we have not heard anything.”

Alaska’s state government also had little to do with the meetings, though China is Alaska’s top trading partner with more than $1 billion in Alaska exports annually, state officials said.

Doug Vincent-Lang, Alaska’s Fish and Game commissioner, wrote in an opinion piece in the Anchorage Daily News on Tuesday that the state was not invited to join in the talks.

“We’re pleased the U.S. and China are starting talks on diplomatic relations,” Vincent-Lang said in an interview Thursday. “But we were somewhat surprised that no one out reached out to the state to discuss what topics for discussion might be important to Alaska.”

Gov. Mike Dunleavy, who has attacked Biden’s oil and gas policies and lack of communication, made a similar point on seafood in an open letter to Blinken that ran in the Peninsula Clarion on Wednesday.

“While I await your response to my recent request to meet in person, I respectfully ask that you raise this critical issue to the Chinese delegation,” Dunleavy wrote in the letter. “The United States must insist on a blanket exclusion from retaliatory tariffs for all U.S. seafood products.”

Trade disputes and the tariffs, at least from a national perspective, are expected to come up in the discussion, said Greg Wolf, executive director of the World Trade Center Alaska, which provides international trade services to organizations statewide.

Wolf briefly met Blinken and his staff on a fuel stopover on Sunday at the Ted Stevens Anchorage International Airport, as the U.S. entourage was flying to Asia for talks with Japanese and South Korean leaders.

The “meet and greet” was a chance to welcome Blinken to Alaska, Wolf said.

Alaska is a logical meeting spot for the two countries geographically, Wolf said. Alaska’s highest rate of COVID-19 vaccinations per capita in the U.S. is also a plus, he said.

She said Anchorage’s midway location between Beijing and Washington, D.C., offers a symbolic location that might help influence the talks.

“Meeting in the middle is a way of saying compromise,” she said.