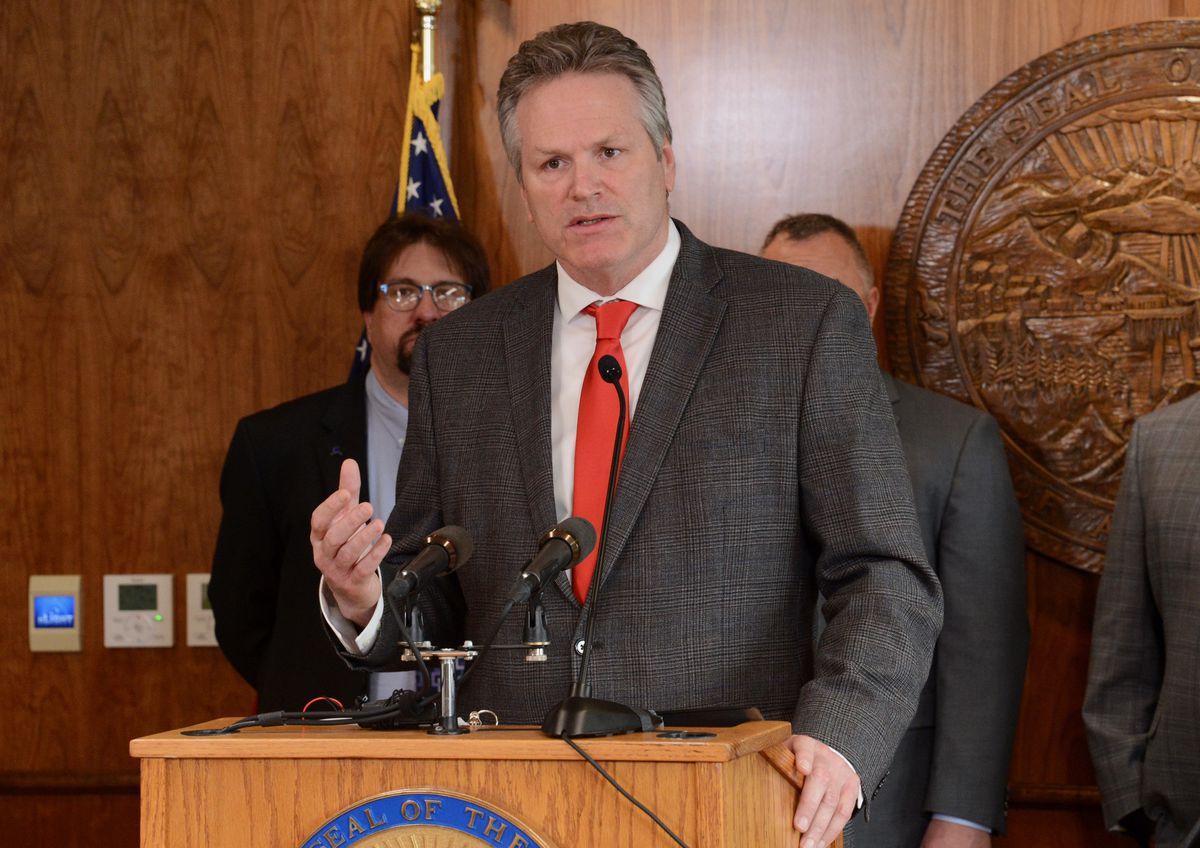 Their proposal, a new constitutional amendment, would not take effect until 2023 but is intended to decisively address fiscal problems that have plagued the state since oil prices plunged in 2015.

Supporters acknowledged that it is not a complete fix. Some estimates indicate that if implemented, the plan would still leave the state with a deficit that exceeds $1 billion and approaches a quarter of the state’s general-purpose revenue.

But Dunleavy said that if the state wants to fix its long-term fiscal problems, it needs to start somewhere.

“We want this to be one part, the first part, of a comprehensive approach to solving this thing,” he said.

Given that the state’s regular legislative session has only seven days remaining, he said it is possible that the idea could be taken up in a special session this summer.

The new proposal would have several major impacts:

The latest projections indicate it would provide a dividend of about $2,600 per person starting in 2023, though the exact amount will vary based on a variety of factors, including the performance of the Permanent Fund’s investments and the number of applicants.

That’s roughly two-thirds of the amount called for by a non-binding formula in existing law but greater than the amounts the Legislature has actually funded in recent years.

The proposal does not address this year’s dividend amount or dividends before 2023.

• It permanently caps the annual transfer from the Alaska Permanent Fund to the state treasury.

In 2018, legislators passed a law mandating regular transfers from the Permanent Fund to the state treasury. That transfer, about $3.1 billion per year currently, now accounts for roughly two-thirds of state revenue, excluding federal money and fees (such as university tuition).

The amendment would cap that transfer at current rates — 5% of the fund’s average value over several years.

A portion of the state-services half would be reserved for subsidizing electricity prices in parts of the state.

Without the cap, legislators may spend any available amount from the portion of the Permanent Fund known as the Earnings Reserve. Spending requires only a majority of the House (21 of 40 members), a majority of the Senate (11 of 20) and the assent of the governor.

• It constitutionally guarantees a subsidy for electricity prices in parts of the state.

It then says a portion of the annual transfer from the Permanent Fund to the state treasury will be used “to equalize the cost of power in the state,” a phrase that would be defined by law. On Wednesday, lawmakers said that their intent is to use the money to subsidize rural electrical prices, as is currently done.

• It would leave a substantial deficit to be resolved by new taxes or major budget cuts.

The latest available estimates from the nonpartisan Legislative Finance Division indicate that it costs roughly $4.7 billion per year in taxes and Permanent Fund transfers to pay for state government. That includes services, construction and renovation of state facilities but does not include the cost of a dividend.

The amendment would cut by half the amount of money available to pay for the budget. Estimates provided by the governor’s office show a deficit of more than $600 million in 2024, when the changes would take effect.

But that estimate is an optimistic scenario, based on projections that state tax revenue will increase significantly. The Legislative Finance Division projects a deficit in excess of $1.1 billion in 2024 under a plan like Wednesday’s proposal.

Furthermore, because the changes proposed in the amendment don’t take effect until 2024, the state would have to figure out how to address years of large deficits before that year.

Movement toward a compromise?

Wednesday’s announcement is politically significant because many of the lawmakers who stood behind Dunleavy — including the governor himself — have long advocated that the state stick with the traditional Permanent Fund dividend formula.

During his 2018 campaign for governor, Dunleavy said he wanted to follow the traditional law. His Democratic opponent, Mark Begich, proposed an idea very similar to the one Dunleavy now suggests.

“I’m so happy to have the governor taking this position. I wish we’d had it three years ago,” said Clem Tillion, a former state lawmaker who now heads the Permanent Fund Defenders.

He said that he would prefer that none of the fund be reserved for state services, but if compromising means permanent protections, it could be worth it.

Earlier this month, Republican members of the state House unsuccessfully attempted to pass budget amendments that called for a traditional payout.

Now, they’re supporting a proposal that would change the formula and reduce the dividend.

Rep. Kevin McCabe, R-Big Lake, introduced a traditional dividend amendment. He said that when he ran for office, he promised constituents he would be part of a solution. He believes that by allowing Alaskans to vote on a constitutional amendment, they will maintain control of the dividend.

“So while this is not perfect, it’s a giant step in the right direction. I don’t think we should let the perfect get in the way of the good,” he said.

Not all supporters of the traditional dividend are backing the governor’s proposal. Sen. Bill Wielechowski, D-Anchorage, was critical Wednesday and took to Facebook, saying that it does not make sense to cut the PFD without making changes to an oil tax system that he sees as favorable to oil companies.

Rep. Jonathan Kreiss-Tomkins, D-Sitka, was not present at Wednesday’s unveiling but has independently been working on a different constitutional amendment along similar lines.

He said that having supporters of the traditional PFD back a “50-50 plan” is significant progress toward a compromise “and I really applaud it.”

He identified two major issues that could prevent the plan from moving forward: First, some legislators are opposed to constitutionally guaranteeing a dividend because it could require significant tax increases. Second, a substantial budget deficit remains.

“That will come home to roost and punch people in the face in a couple years’ time,” he said.

Unless some tax increases — or other revenue measures — are included with the proposal, “I feel quite confident that it would not be able to attract the necessary support for passage,” he said.

Natasha Singh of the Tanana Chiefs Conference said that organization, which represents rural Alaskans across the Interior, is cautiously hopeful about Wednesday’s proposal. She said TCC hopes it’s a “conversation starter” but doesn’t want to see it lead to further budget cuts, which could be required as a consequence of the plan.

“The state needs new revenue. We cannot afford to cut state services, government services. We know at TCC that any further cuts would be on the backs of the most vulnerable,” she said.

Stutes said the 21-member coalition House majority has not yet discussed Wednesday’s proposal and does not have a unified position.

The initial prospects may be better in the Senate. After a few hours of debate Wednesday afternoon, the Senate Judiciary Committee advanced the new proposal out of committee and on to the Senate Finance Committee, which has not yet listed it on its calendar.

[Correction: A previous version of this article incorrectly reported the effective date of the proposed constitutional amendment. If approved by voters, it would take effect in fiscal year 2024, which includes the 2023 Permanent Fund dividend.]