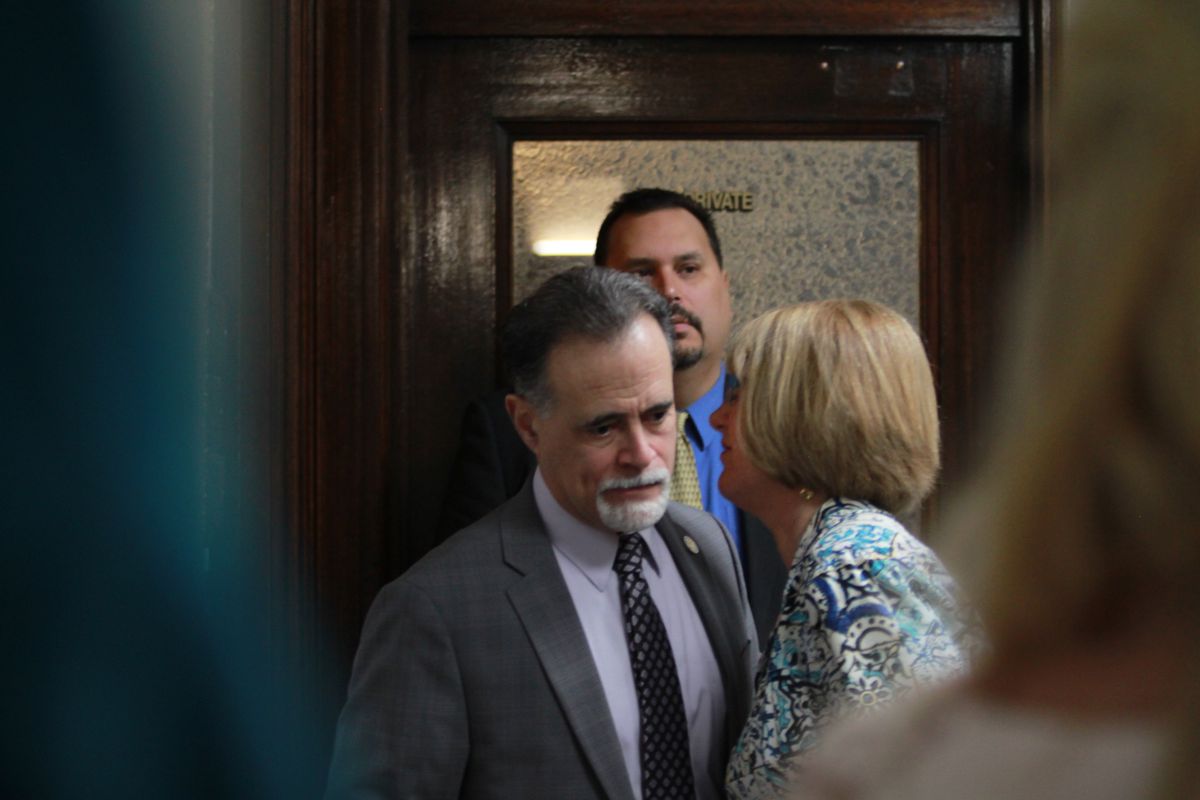 JUNEAU — The Alaska Senate's Republican-led majority on Monday followed through on its pledge to cut 5 percent from schools, pairing that proposal with a new cut to the university system and legislation to eliminate a state-sponsored scholarship program.

Senate leaders, at a Monday morning news conference where they announced the cuts, simultaneously unveiled a set of three new bills they said could offset the impact of the reductions.

[Read a summary of the Senate's education plan]

The bills would boost state spending on broadband, ease curriculum standards and establish a new grant program for schools with "innovative education ideas," according to the legislation.

Senators at the news conference rattled off a series of dire statistics about Alaska's education system. It has one of the nation's lowest high school graduation rates, with many freshmen needing remedial classes in English and math when they get to the state university system, which majority members argue is a reason to do things differently.

"Clearly, we feel that a reset is required," said Sen. Peter Micciche, R-Soldotna, the majority leader.

The proposals are among the last pieces of a Senate plan that seeks to reduce Alaska's $2.8 billion deficit with cuts and investment earnings from a restructured Permanent Fund — and without using taxes.

Also Monday, the Senate Finance Committee advanced its revised budget bill to the floor for a vote that's expected later this week.

But with just two weeks left before lawmakers hit an initial statutory deadline of 90 days — they can keep working for up to 121 days under the Constitution — the Senate's proposals face a tight timeline and stiff opposition from the House, which is controlled by a predominantly Democratic majority coalition.

"I can categorically say it's a bad idea," said Rep. Adam Wool, D-Fairbanks, referring to the schools cut.

School officials and advocates also quickly questioned why the bills weren't unveiled before the third month of the legislative session, throwing uncertainty into districts' own budgeting processes.

The Senate suspended legislative rules to schedule hearings on the new bills Tuesday, since the rules typically call for five days' notice.

A similar education package that the Senate unveiled late in last year's session generated sharp criticism and never made it to the floor for a vote.

Among the Senate's new proposals Monday was Senate Bill 102.

The legislation would boost state assistance payments for broadband so that school districts can more than double their download speeds, to 25 megabits a second from 10.

The program would cost an estimated $16 million in its first year, with state cash matched by generous subsidies from the federal government.

Senate Bill 104 would suspend for three years a requirement that the state Board of Education review school districts' curriculums — a move that the majority said was designed to save districts time and money, though it didn't have estimates of potential savings.

Senate Bill 103 would create the system of "education innovation grants" while eliminating the Alaska Performance Scholarship program, which was a signature initiative of former Republican Gov. Sean Parnell.

The replacement program would allow districts to apply for grants for "innovative education ideas."

The legislation describes those broadly as teaching using a "combination of technologies" like video, software and social media; projects that support teachers and students by using "a variety of educational resources to bring new instructional approaches into classrooms"; and programs that change the way students and teachers interact.

The annual budget for the grants would be set by the state education commissioner and be subject to legislative approval.

The grants are designed to allow districts to "do more with less," said Sen. Shelley Hughes, R-Palmer, and chair of the Senate Education Committee.

"We believe that our kids can do better, and by being innovative we think we're going to begin to close the achievement gap," Hughes said.

Anchorage Democratic Sen. Bill Wielechowski rejected Hughes' argument, saying the new legislation is not "anywhere near making up for what they're cutting."

"You need good teachers. You need small class sizes," he said. "Those are the fundamental things in the education system."

Each of the new bills will have to pass the Senate education and finance committees before a floor vote and a trip to the House.

The $69 million cut, or nearly 6 percent, from schools, however, is already on its way to the floor, after the Senate Finance Committee approved it Monday.

So is the $5.7 million reduction to the university, which comes on top of a $16 million cut that the Senate previously proposed for the system.

The new $5.7 million cut was part of an across-the-board, $17 million staffing reduction for Gov. Bill Walker's administration, and university officials denounced it along with the potential elimination of the scholarships and the shuttering of a long-sought road project that would have eased access to its Anchorage campus.

"These legislative cuts and the impact they will have on the university are devastating," Jim Johnsen, the university president, said in a prepared statement.

School board members across the state also criticized the proposed $69 million cut, which would come out of the $1.2 billion that Walker proposed based on a per-student formula — the largest single line item in the state's agency budget.

Senate Republicans noted they've left the formula spending alone even while approving sharp reductions to other state programs over the past two years. But Bill Hill, superintendent of the Bristol Bay School District, argued that administrators have already been "tightening their belts" as state spending hasn't kept up with inflation.

The state House is advancing its own deficit-reduction proposal and budget that would leave the per-student formula spending in place. But that plan relies on a new statewide income tax that Senate majority members have opposed.

Asked why the majority preferred the schools cut to the income tax, Sen. Anna MacKinnon, R-Eagle River and co-chair of the Senate Finance Committee, responded by saying that the House hasn't shown that the tax measure has the support it needs to pass.

The legislation is currently stuck in the House Finance Committee, where members spent Monday considering amendments.

"When the House is able to advance a piece of legislation, then I think we can take up the question again," MacKinnon said. "But until they act, all they've done is talk about it."