Alaska Senate’s cuts are close to $300M on paper. But their effect on spending will be far less. 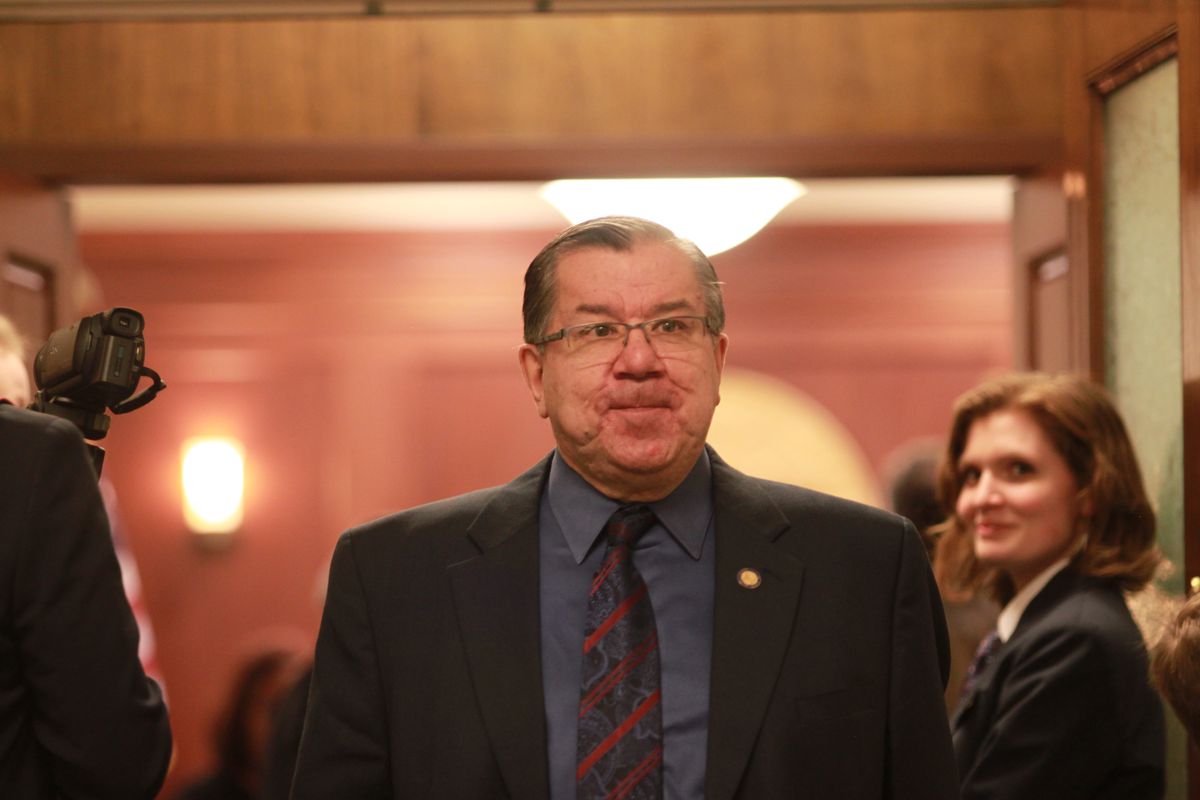 JUNEAU — The Alaska Senate's Republican majority has pledged to cut $300 million from the state budget as part of its deficit-reduction plan.

But while the Senate's latest spending plan would use $262 million less next year from the state's unrestricted general fund, the real reduction in the size of government will be far less. That's because more than $100 million in Senate cuts from the unrestricted general fund would be replaced with spending from other accounts, or in future budgets.

Among the ways the Senate is achieving the "cuts" is by using a restricted fund to accept $70 million from anticipated revenues from the state's gasoline tax — even though the Senate hasn't actually approved a tax increase that would generate about half of the cash.

Some $50 million in cuts to ferry spending will simply be spent from other accounts that don't show up as unrestricted general funds. A $17 million reduction for schools will be replaced with leftover money from a canceled Anchorage road project.

And a $17 million cut in Medicaid spending will likely reappear in a supplemental budget request by Gov. Bill Walker's administration next year, because the Legislature hasn't changed state laws entitling people to medical care, according to Walker's budget director, Pat Pitney.

The discrepancies stem from accounting.

Lawmakers typically measure the state's deficit by looking at spending from the state's unrestricted general fund — cash that hasn't been designated for any particular purpose.

But that number doesn't capture the full scope of state government, since it leaves out spending from other accounts designated for specific programs.

Budget hawks and conservative lawmakers have been scrutinizing the new Senate proposal since the majority unveiled it Monday.

And after two years of steep reductions to close Alaska's deficit, the new numbers show just how hard it's become to find politically palatable cuts — and for the Senate to match its budget-cutting rhetoric with its actions, said Brad Keithley, the oil and gas consultant turned Alaska budget analyst.

"As we've gone deeper and deeper in the cuts, the constituencies being affected have dug in their heels harder and harder and harder," Keithley said. "They're just finding it difficult to stand up to that the more and more they cut."

The Senate's budget does include sizable cuts in areas that will force lower overall spending. A $70 million schools reduction in unrestricted general funds, or nearly 6 percent, isn't replaced by other sources of cash; neither is the more than $20 million, or 7 percent, cut from the state university system.

The Senate leader in charge of the state operating budget, Bethel Democrat Lyman Hoffman, said he didn't want to debate the details, even as he argued that the "black and white of it" was that the budget was being cut by some $300 million.

"It is a reduction. This is the relief on the general fund," said Hoffman, co-chair of the Senate Finance Committee and the sole Democrat in the Republican-led majority.

"I don't want to talk about what's a cut and what's not a cut," he added. "People are more concerned about the level of cuts we're making, and not concerned about what we are not cutting. I think that's a bigger issue."

The Senate president, Pete Kelly, R-Fairbanks, also used the figure of about $300 million in cuts when he addressed business groups last week.

"If you go away with no other thing from this meeting, I hope you will take this away. And that is that we have cut the budget," Kelly said, citing several years of reductions as well as the ones proposed this year. "The math is simple on this, but the politics are very difficult."

The budgeting techniques, however, could create both political and practical complications for the Senate majority as its members make the case for their broad plan to reduce the state's $2.8 billion deficit.

A separate plan is under consideration in the House, where the predominantly Democratic majority coalition argues that budget cuts over the past two years have already made state government "right-sized."

The coalition plan would balance the budget at current spending levels by paying smaller Permanent Fund dividends and levying a state income tax, though the proposal is currently stalled in the House Finance Committee.

In the Senate, majority members say they can avoid new taxes by reducing dividends and cutting $750 million in general funds over the next three years — starting with this year's $300 million.

But the reductions contained in the new Senate budget plan will be hard to sustain for more than a single year, said Pitney, Walker's budget director. Providing the same level of government services after next year will require $100 million to $200 million more from the unrestricted general fund than is in the Senate's current budget, Pitney said.

Two accounting maneuvers in the new Senate plan, for example, would revise the current year's budget to put $47 million — including $17 million from the stalled U-Med road project in Anchorage — into a pair of separate accounts that pay for schools and state ferries, respectively.

Next year, the $47 million would be spent on schools and ferries. But because the cash comes from the school and ferry accounts, it won't count as unrestricted general funds.

The following year, there won't be any more leftover money from the U-Med project, which means maintaining education spending will require $17 million more from the unrestricted general fund — and the ferry system could face a similar hole.

"The way they funded it is not sustainable," Pitney said in an interview, referring to the Senate's budget.

The $47 million cut from the unrestricted general fund also does not reduce overall government spending, which is one of the Senate's stated priorities.

The same goes for gasoline tax revenue. About half of the existing tax revenue is relabeled in the budget as "designated general funds," taking it out of the unrestricted category. In all, the gas tax accounts for about $70 million of the Senate's unrestricted general fund cuts — about half from the relabeling, and half by increasing the tax rate, itself a deal that remains far from done.

The gasoline tax change originally came in Walker's budget. But the Senate majority didn't remove it.

"It isn't a cut," said David Teal, the Legislature's chief budget analyst. "It's a reclassification."

And though the tax money would help fill the state's deficit over the long term, it's also not guaranteed; Walker's legislation to increase the rate is stuck in the finance committees in both the House and Senate.

Asked if the Senate would approve the gas tax increase, Hoffman, the finance committee co-chair, responded: "I don't predict what we're going to pass."

The Senate majority's accounting techniques have drawn skepticism not just from budget hawks but also from conservative lawmakers. Rep. Lora Reinbold, R-Eagle River, looks at state spending through a broader lens by including all different funds, including federal spending, in her calculation.

By that broader measure, Senate spending next year would be less than 1 percent below the current year, Reinbold said — a number that's corroborated by lawmakers' own budget analysts.

Another conservative lawmaker, Wasilla Republican Sen. Mike Dunleavy, said he will likely vote for the Senate budget proposal this week to allow the House to take it under consideration.

But Dunleavy — who helped draft state agency budgets as a member of the Senate Finance Committee — wasn't ready to endorse the plan from his own majority. He said he needs more time to decipher its details before deciding whether to support it in a final vote, once it returns from negotiations with the House.

Dunleavy said he's likely to end up giving his constituents two or three different breakdowns of the budget, "so they can understand why I'm looking at it that way."

"It's almost a Rosetta Stone," he said.

"What you want to look at as cuts, or not cuts, in many cases is in the eyes of the beholder," he said.