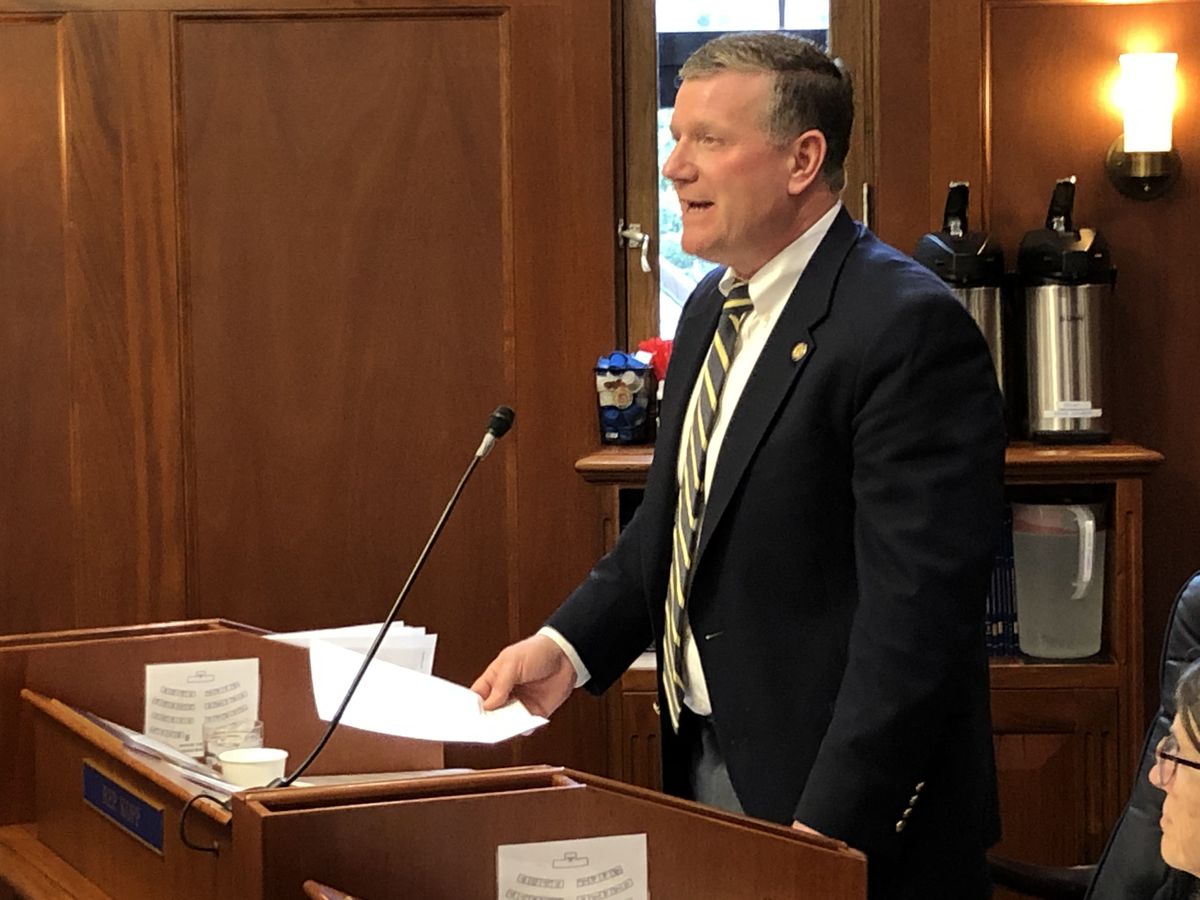 Rep. Chuck Kopp, R-Anchorage, speaks against acceptance of the Senate changes to House Bill 49 on Tuesday, May 14, 2019. (James Brooks / ADN)

Rep. Chuck Kopp, R-Anchorage, speaks against acceptance of the Senate changes to House Bill 49 on Tuesday, May 14, 2019. (James Brooks / ADN)

JUNEAU — The Alaska House of Representatives Tuesday rejected the state Senate’s amendments to an anti-crime bill, likely forcing the Legislature into special session.

The Senate voted 19-0 on Tuesday morning to approve legislation repealing and replacing the 2016 criminal justice reform law known as Senate Bill 91. A version of that repeal-and-replace legislation, known as House Bill 49, passed the House last week, but the Senate extensively modified the House version.

Hours after the Senate acted, the House voted 22-18 to reject the Senate’s changes.

The disagreement will force negotiations on a compromise, but the Legislature’s constitutional end is Wednesday, and there likely will not be enough time for the conference committee to finish its negotiations before that deadline.

In addition, lawmakers have not completed work on the state operating budget, and they have not set an amount for this year’s Permanent Fund dividend.

In a separate meeting with reporters, Senate President Cathy Giessel, R-Anchorage, said there is “certainly potential” for a special session.

“I don’t think the support is there,” said Rep. Sara Rasmussen, R-Anchorage, of the extension vote.

She said she would prefer a focused special session.

“I would prefer that we get called back in for specific topics rather than extend for 10 days and talk about any topic under the sun,” she said.

“The problem is, I can’t trust them,” he said of the majority.

Tuesday’s votes on crime legislation capped months of work by the Senate and weeks of debates in the House over the proper way to address Gov. Mike Dunleavy’s call for a “war on criminals.”

Following his State of the State address earlier this year, the governor introduced four major anti-crime bills. Three dealt with the repeal of SB 91, and the fourth included changes to the state’s laws on sex crimes.

Passed in 2016 to shrink the state’s prison population and cut correctional costs, SB 91 reformed the state’s parole and pretrial systems, generally lowering criminal punishments for nonviolent offenses. Subsequently, SB 91′s reforms have been blamed for contributing to a spike in property crimes.

On Tuesday, House Rules Committee chairman Chuck Kopp, R-Anchorage, said on the floor that those modifications are extensive and must be vetted with care.

“HB 49 left this as a 73-page bill. It came back as a 96-page bill,” Kopp said, adding that his vote is not a rejection of the Senate changes, just an acknowledgement that more time is needed.

In a subsequent press conference, he said the House’s disapproval “is not a repudiation” of the Senate changes.

“This is about process. This is about making sure we have a chance to actually review each of those ... sections that were changed or added,” he said.

Among the most significant changes made by the Senate:

• A second arrest for drugs possession is a felony. The House plan had made a third arrest a felony. (Under both plans, the first arrest is a Class A misdemeanor.)

• Marriage is not a defense in cases of sexual assault involving an incapacitated spouse and their partner.

• The controversial pretrial release formula created by SB 91 may be used by judges; the House version said judges shall use the tool (but don’t have to follow it).

• Someone’s driver’s license can be canceled if they have more than $1,000 in traffic tickets (not parking tickets) and are not making efforts to pay them.

• Someone sentenced to manslaughter or murder must serve two-thirds of their sentence before they become eligible for discretionary parole.

Rep. Matt Claman, D-Anchorage, said, “We have an obligation not just to be tough, but we have to be smart on crime and get it right. That’s really what Alaskans are asking.”

Claman, Kopp and Pruitt will be the House negotiators on the crime conference committee; in the Senate, Sens. Shelley Hughes, R-Palmer; Mike Shower, R-Wasilla; and Bill Wielechowski, D-Anchorage, will participate.

“I don’t know how many things the House doesn’t like about the Senate’s crime bill, so how long that conference committee wrangles, I don’t know. Only time will tell,” Giessel said.

He and Kopp also suggested that lawmakers and the public should be more aware of the costs of the legislation. Fiscal notes indicate it would cost $100 million in the first two years of passage, but Claman said he believes the figure is higher.

On the Permanent Fund dividend, lawmakers — particularly in the Senate — lack consensus. The coalition House majority, with 23 of its 24 members present, held a press conference last week in support of a dividend that does not require spending from state savings accounts. As currently budgeted, that would be a dividend of about $1,200 per person.

Are there 11 votes in the Senate for one particular amount?

“Not at this point. We don’t,” Giessel said.