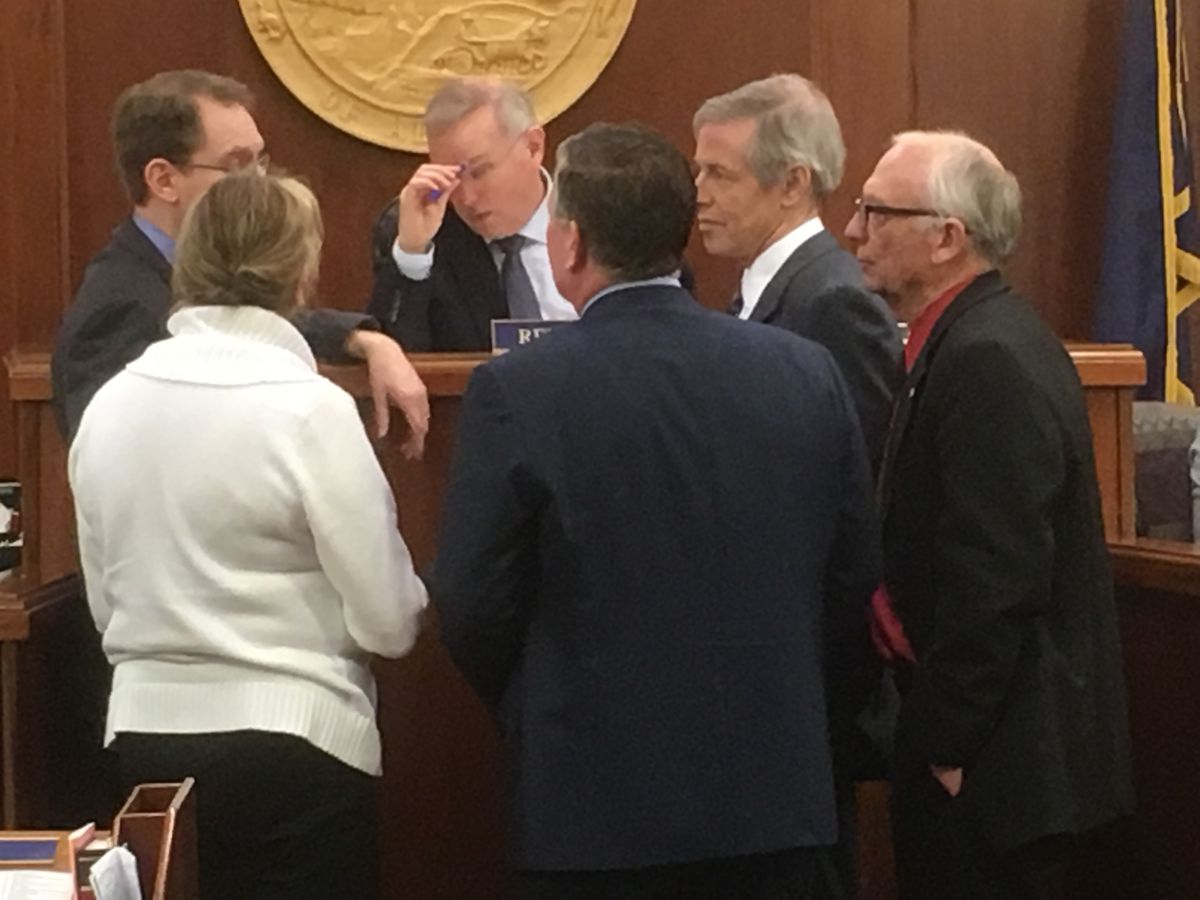 Speaker of the House Bryce Edgmon, I-Dillingham, puts a hand to his head as lawmakers gather to discuss an amendment to proposed anti-crime legislation Wednesday, May 8, 2019 in the Alaska House of Representatives. (James Brooks / ADN)

Speaker of the House Bryce Edgmon, I-Dillingham, puts a hand to his head as lawmakers gather to discuss an amendment to proposed anti-crime legislation Wednesday, May 8, 2019 in the Alaska House of Representatives. (James Brooks / ADN)

JUNEAU — The Alaska House of Representatives voted 24-14 on Wednesday to continue a rollback of the criminal justice reform legislation known as Senate Bill 91, but it was not immediately clear whether the rollback still satisfies Gov. Mike Dunleavy.

The governor has implied that crime legislation passed by the Legislature this year must include provisions of four anti-crime bills he introduced at the start of the session, or he may call lawmakers into special session to address the topic.

Earlier this week, the governor told reporters that House Bill 49, the measure approved Wednesday, satisfies his desire for change.

“If that bill stays intact, it’ll do the job for what we were looking for,” he said Monday.

But lawmakers on Wednesday amended the bill to preserve the state’s pretrial enforcement division and good-behavior incentives for probation and parole.

Those were not in the version of the bill discussed by the governor.

Rep. Tammie Wilson, R-North Pole and one of the leaders of the coalition House majority, was asked whether the governor approved of the amendments.

“Yes,” she said. “We’ve been working really closely with the governor.”

Matt Shuckerow, Dunleavy’s press secretary, declined to make a definitive statement but acknowledged the changes and the possibility of further amendments in the Senate.

“We’re going to refrain from weighing in directly and allow the process to move forward,” he said.

Members of the coalition majority praised passage of HB 49.

“We can truly say we have a bill that repeals and replaces Senate Bill 91, and particularly the harmful portions of it,” said Rep. Chuck Kopp, R-Anchorage and chairman of the House Rules Committee.

Passed in 2016, Senate Bill 91 changed many aspects of the state’s criminal justice system in an effort to shrink Alaska’s prison population and cut correctional costs. Critics say it has contributed to a surge in crime, and lawmakers have taken that criticism to heart.

HB 49 increases prison sentences for many offenses that had been subject to lesser penalties under SB 91. It creates new criminal statutes for illicitly recording someone in a changing room and for carrying car-theft tools. It overhauls the state’s pretrial and post-release probation and parole systems.

Members of the Republican House majority said the bill didn’t go far enough, and they almost universally rejected it.

Rep. David Eastman, R-Wasilla, said HB 49 is “nipping around the edges” of the state’s problem.

“Crime is clearly out of control,” said Rep. Josh Revak, R-Anchorage, referring to a Tuesday night riot at the state prison in Seward.

“I believe at this time we should be strengthening our laws for criminal justice and protecting victims’ rights,” said Rep. Sara Rasmussen, R-Anchorage, explaining that in her view, HB 49 does not go far enough.

Rep. Matt Claman, D-Anchorage and chairman of the Alaska Criminal Justice Commission, offered an opposing voice, saying that criminal justice is a matter of rehabilitation as well as imprisonment, and there should be a balance between the two, keeping in mind the costs.

According to fiscal notes from the governor’s office, the first-year cost of HB 49 approaches $40 million and requires preparations to reopen a Palmer prison closed after SB 91′s passage. Wilson said those are draft notes and the real first-year cost will be about $12 million.

“This bill, I believe, strikes the very kind of balance the public has asked us to do,” Claman said.

Wednesday’s final vote was mostly along caucus lines, with members of the coalition majority voting yes and members of the Republican minority voting no. Two members were excused absent, and there were two exceptions to the pattern: Rep. Grier Hopkins, D-Fairbanks, voted no. Rep. Ben Carpenter, R-Nikiski, voted yes.

Speaking afterward, Hopkins said he believes there is sufficient data to show that simply increasing prison sentences does not reduce crime. Carpenter said his vote was cast in error.

Rep. Gabrielle LeDoux, R-Anchorage, is not a member of either caucus and voted yes.

She said she is “not really happy with the bill."

“Nevertheless, I tend to believe we should not make the perfect the enemy of the good,” she continued. “I can’t in good conscience vote against this bill simply because it does not do everything I would like it to do.”