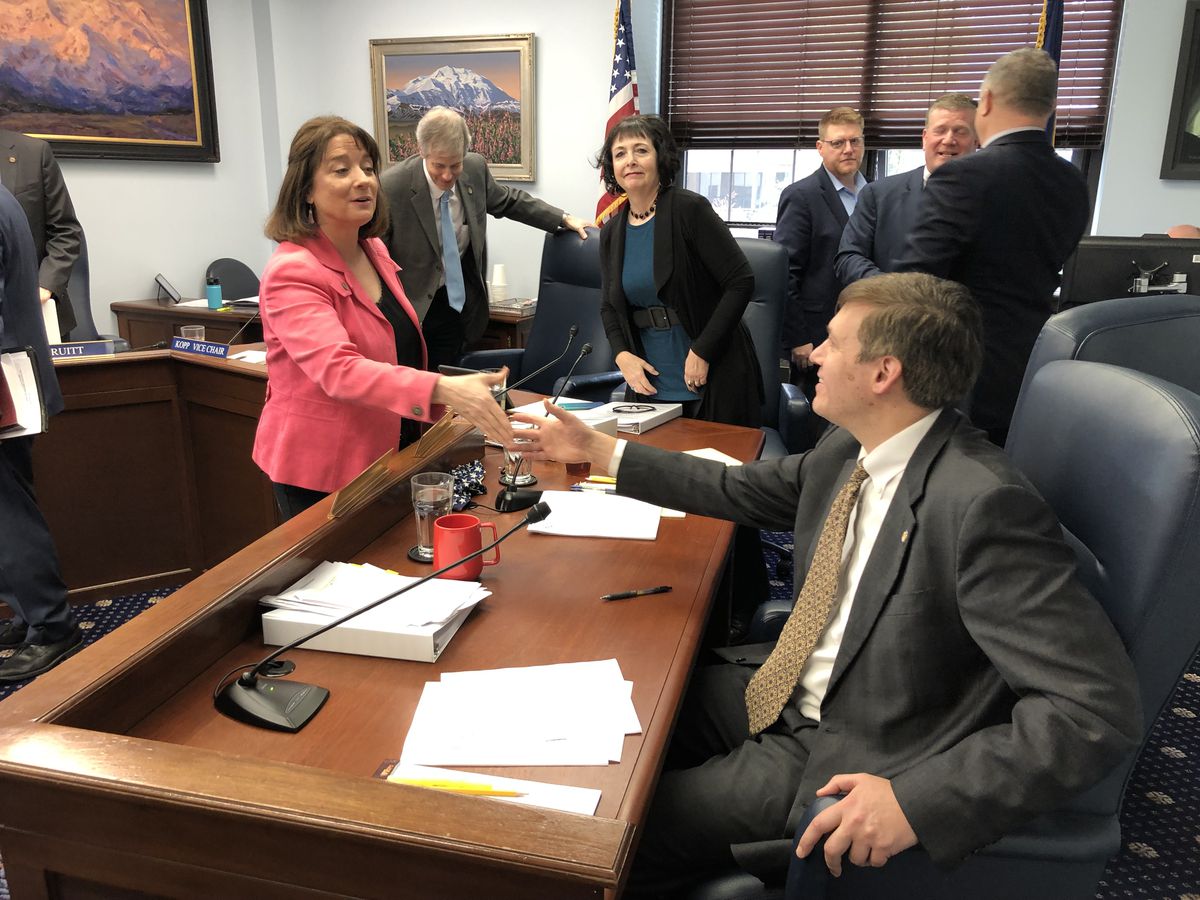 JUNEAU — The Alaska Legislature has opened its special session with a landmark agreement on criminal justice legislation.

In a Thursday morning meeting, House and Senate negotiators finalized a compromise proposal that repeals and replaces Senate Bill 91, the controversial 2016 criminal justice reform law that has been accused of contributing to high rates of property crime in Alaska.

A final vote on the compromise has been tentatively scheduled for Monday in the House and Senate. That schedule allows legislative lawyers to examine the language of the bill and legislators to read the compromise, lawmakers said.

“This was truly a bipartisan, bicameral effort. Everyone was involved,” said Sen. Bill Wielechowski, D-Anchorage. “This is a repeal. This is an absolute repeal and replacement of Senate Bill 91.”

Thursday’s agreement was a top priority for Gov. Mike Dunleavy, who advocated the repeal and replacement of SB 91 during his campaign for office and introduced legislation along those lines.

When lawmakers failed to reach agreement during the regular session, he placed it at the top of his agenda on a special session that began Thursday.

Other items on the agenda include a state operating budget, capital budget, new language for the K-12 funding formula and an amount for this year’s Permanent Fund dividend.

While lawmakers were already near agreement on anti-crime legislation and are near done with work on the capital budget, the remaining items on the agenda will require more work.

“The (operating) budget bill will continue being looked at in the conference committee, and the main issue that we’re addressing is the dividend,” said Senate Majority Leader Mia Costello, R-Anchorage.

K-12 education is on the agenda because of a blossoming disagreement between the governor and the leaders of the House and Senate. Legislators funded K-12 education in advance with legislation passed last year, but the governor believes that is illegal. Lawmakers disagree, and they have shown no signs of changing that opinion.

“The Senate and House are pretty confident in the fact that we’ve forward-funded education, so that will play itself out,” Costello said.

Lawmakers will begin work in earnest next week; many are flying out of Juneau to touch base with constituents at the end of the regular session and the start of the special session.

They also will be taking time to examine the criminal justice compromise wrought by others.

One of the more contentious arguments was over the state’s pretrial risk assessment tool, a mathematically derived system that determined whether someone accused of a crime should be released from prison before trial.

The tool was intended to create a system blind to any racial or economic biases. Alaska Natives make up a disproportionately large share of the state’s prison population.

“It is huge. It is something that needs to be addressed in next year’s look at what we do,” said Sen. Lyman Hoffman, D-Bethel, in a speech on the Senate floor about the racial disparity.

Since the tool’s introduction, however, it has been criticized for denying flexibility to judges, and some state residents have said that it has allowed criminals the freedom to commit other crimes while awaiting trial.

“We have agreed, while the risk assessment tool stays … it is no longer mandated as it was previously,” said Sen. Mike Shower, R-Wasilla, explaining a portion of Thursday’s compromise.

“It is something the court will consider, but it is no longer directly a trump card on a decision whether or not to release,” said Rep. Chuck Kopp, R-Anchorage.

After negotiators approved the deal, Sen. Lora Reinbold, R-Eagle River, gave high-fives and handshakes to the legislators in attendance, then drew them together for a photograph. Reinbold voted against SB 91 as a member of the House of Representatives after attempting a filibuster and has spent the last three years pursuing its repeal.

“There’s agreement between all the members on the committee, and there’s a sense of exuberance that we’re going to be delivering a crime package for the governor to sign,” Costello said.

That kind of consensus was absent on Wednesday, when lawmakers lacked the support even to extend the regular session and preempt the need for a special session.

Lawmakers could have extended the regular session for 10 days, but doing so requires two-thirds of the House and two-thirds of the Senate to agree, and the 15-member Republican House minority was not willing to extend.

At least two-thirds of the state’s 60 lawmakers must agree in order for lawmakers to call themselves into special session. Legislators could not muster those votes, so the special session was called by the governor.

Speaking Wednesday, he said he considered calling the session in the Matanuska-Susitna Borough, but the special session proclamation issued late Thursday listed Juneau as the chosen spot.

Legislators have up to 30 days to resolve the issues on the docket.

If 30 days isn’t enough, the governor has already made plans for a second special session. In a press conference Wednesday afternoon, he said that second session could be in the Mat-Su.

He reinforced that in a prepared statement early Thursday morning.

“If the legislature again fails to adopt a full PFD, operating and capital budgets, fund education and pass an effective crime package, it will be evident we will need to move to a new venue,” he wrote.