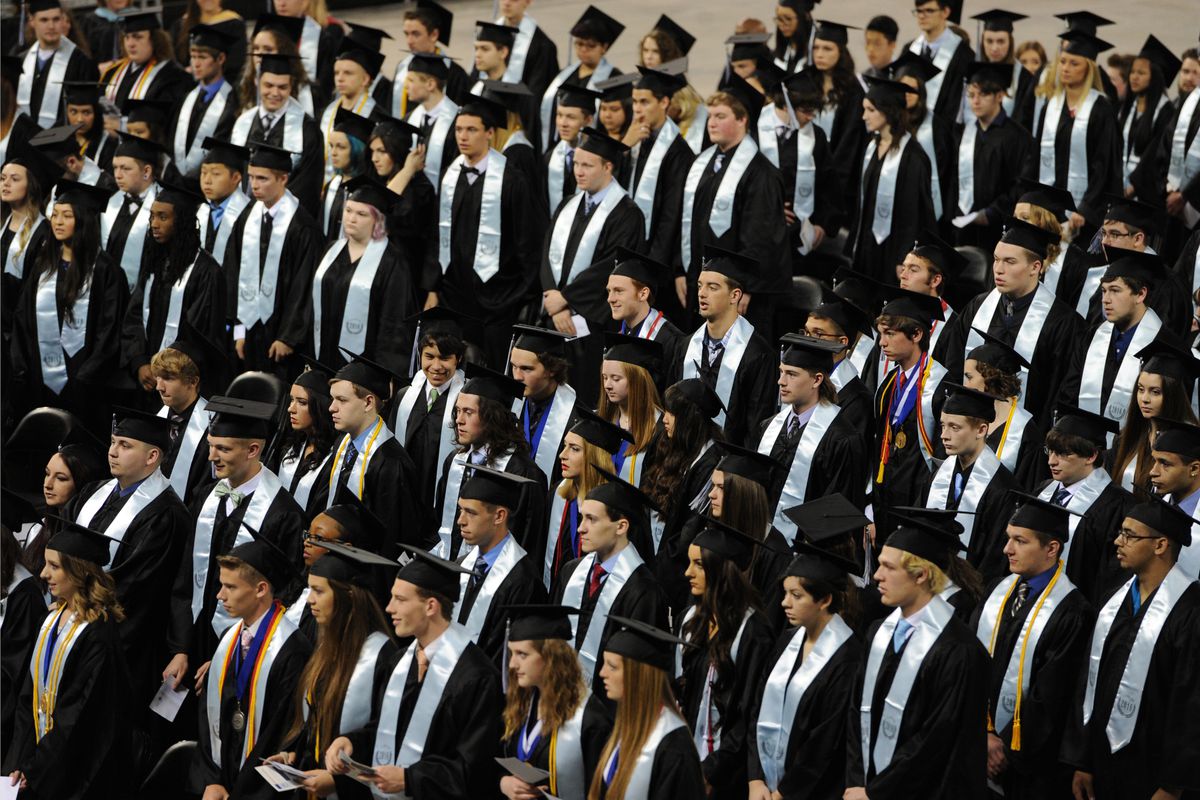 Chugiak High commencement ceremony at the Sullivan Arena on Monday, May 9, 2016. (ADN file)

Chugiak High commencement ceremony at the Sullivan Arena on Monday, May 9, 2016. (ADN file)

JUNEAU — Thousands of Alaska college students received letters Tuesday evening warning that they will no longer receive their scholarships or state-backed tuition because of a failed budget vote in the Alaska Legislature and a decision by Gov. Mike Dunleavy.

Those actions may have drained the state’s Higher Education Investment Fund, nearly $350 million, and they may have also drained dozens of other state funds containing more than $1.6 billion reserved for programs ranging from rural power subsidies to the cleanup of leaking underground fuel tanks.

The interruption in scholarship funding may be temporary, or it may be permanent, depending on the actions of the state Office of Management and Budget and the Alaska Legislature, which is mired in deadlock as one-third of its members remain absent from the state Capitol amid a dispute over the rightful location of the second special session this year.

“The issue is that the current funding source does not have funds available for the programs,” wrote the Alaska Commission on Postsecondary Education in the letters to students and in a Q&A posted on its website. “We are hopeful that this situation will be resolved with legislation over the next month; however, as of this time, ACPE is not able to make awards under these programs.”

In a teleconference with reporters Tuesday evening, deputy OMB director Laura Cramer said the governor’s administration is still finalizing the list of affected state funds, and the Higher Education Investment Fund may yet be unaffected. In the meantime, however, the administration has asked the managers of the relevant accounts to refrain from signing new deals or contracts.

“ACPE saw their commitment to students as agreements or contracts,” she said.

Legislators were quick to criticize the governor.

“This is yet another deliberate attack on education and opportunities for young Alaskans by Governor Dunleavy,” said Senator Tom Begich, D-Anchorage. “If you stand with the governor on this action, you do not stand for opportunities for Alaskans.”

Alaska’s state budget relies upon dozens of savings accounts reserved for individual programs, such as college scholarship funds, but under a constitutional amendment approved in 1990, all of those accounts are supposed to be swept into Alaska’s Constitutional Budget Reserve on June 30 each year.

To avoid causing problems for the programs that rely on those savings accounts, the Legislature each year approves what’s known as the “reverse sweep." With the approval of three-quarters of the House and three-quarters of the Senate, the money is swept into the budget reserve on time, following the constitution, then is swept right back out to its starting point at 12:01 a.m. July 1.

This year, that didn’t happen. The 15-member Alaska Republican House minority voted against the reverse sweep in an attempt to pressure the coalition House majority into approving a $3,000 traditional Permanent Fund dividend. That didn’t work, and the minority has maintained its position since then, preventing a fix.

Traditionally, not every program’s savings account is subject to the sweep. In 2018, a list provided by the nonpartisan Legislative Finance Division shows 31 state savings accounts eligible for sweeping. The Higher Education Investment Fund, which pays college scholarships, is not one of them.

But the Dunleavy administration, according to its Office of Management and Budget, has been working with the Alaska Department of Law to redefine what funds are eligible for sweeping. OMB has declined to state — even to members of the Alaska Senate Finance Committee — what funds are now eligible for the sweep.

Sen. Bert Stedman, R-Sitka, said Tuesday in a committee hearing that OMB declined a request to answer questions from the committee and would be unable to do so all week. He said the committee could subpoena such answers, but it was not planning to do so at this time. That would be an extraordinary action. No legislative subcommittee has subpoenaed a governor’s official since the 2008 Troopergate investigation into then-Gov. Sarah Palin.

Cramer said a variety of reasons prevented OMB from presenting to the committee, including the fact that the committee requested a hearing with less than 24 hours’ notice and that work on the list of swept funds is not complete.

“Our intent is not to withhold information from the Legislature or from the public,” she said.

“We don’t have an ironclad answer yet, but the strong presumption from what we understand is the PCE endowment fund will be liquidated,” Edgmon said.

In addition, lawmakers arranged to have the PCE fund pay for new criminal justice legislation that repeals and replaces the old Senate Bill 91 reforms.

With fund managers told not to enter new agreements, Cramer said it is “correct” to say that the crime bill is now unfunded.