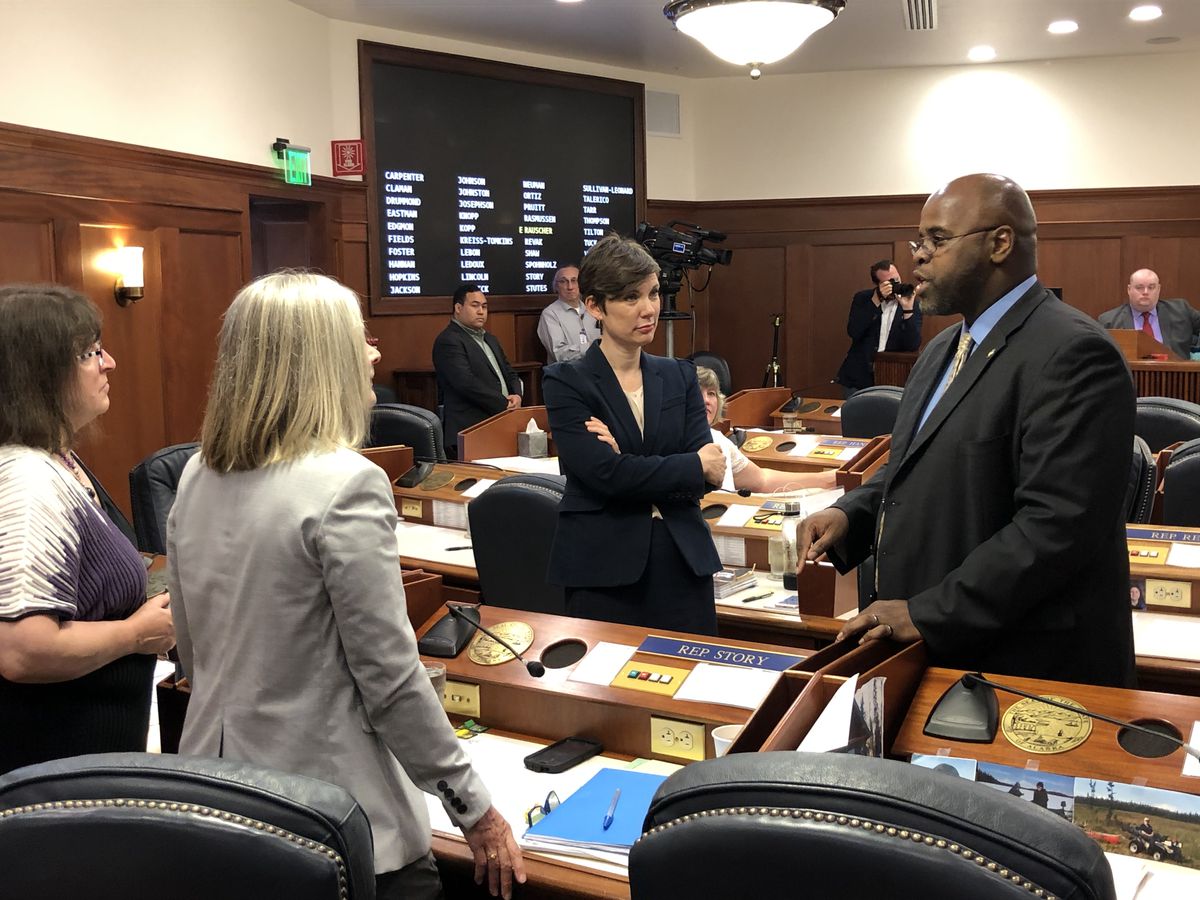 Sen. David Wilson, R-Wasilla, tells members of the House of Representatives on Thursday, July 11, 2019 that he believes the governor's vetoes are not as bad as they have been made out to be. Rep. Harriet Drummond, D-Anchorage (far left) responded that for students losing their scholarships and seniors losing care, they are. (James Brooks / ADN)

Sen. David Wilson, R-Wasilla, tells members of the House of Representatives on Thursday, July 11, 2019 that he believes the governor's vetoes are not as bad as they have been made out to be. Rep. Harriet Drummond, D-Anchorage (far left) responded that for students losing their scholarships and seniors losing care, they are. (James Brooks / ADN)

This story has been updated with a new article: Big spending cuts and deadlines loom as the standoff continues among Alaska legislators and governor

JUNEAU — In a joint session of the Alaska House and Senate Thursday morning at the Alaska State Capitol in Juneau, lawmakers again failed to gather the 45 votes needed to reverse $444 million in budget vetoes signed by Gov. Mike Dunleavy and — knowing they lacked the support — declined to vote on an override of the governor’s decision to veto $10.8 million from the state capital budget, signed Wednesday.

The failures, which came with a third of the Legislature’s members absent in Wasilla, mean significant cuts to senior services, public health care and the University of Alaska. More cuts are on the horizon as the Legislature remains deadlocked, endangering services funded through the unfinished capital budget.

In the Alaska Legislature, three-quarters of its 60 members are needed to override a governor’s budget veto, the highest such hurdle in the United States. With 22 members away from the Capitol, claiming Wasilla is the rightful place of the ongoing special session, there is no chance of a reversal before the end of the day Friday, the deadline for an operating budget override, according to the Constitution.

For the fourth day in a row, the Alaska Legislature met in two cities hundreds of miles apart. Both groups of legislators remain certain they are in the right spot.

A group of five legislators in Wasilla held a brief unofficial meeting at 11 a.m. Thursday in front of a crowd of dozens. The governor had scheduled the special session to start Monday in Wasilla, and the lawmakers in that city say it’s the only legal meeting spot, and the session in Juneau is illegitimate. Those in the capital disagree, and they have a majority of support, allowing them to convene the special session.

In Juneau, legislators are scheduled to hold another vote Thursday on overturning all of Gov. Mike Dunleavy’s vetoes to the state operating budget. That vote failed a day before, and it’s headed that way again. There are only 39 legislators in Juneau, and they need 45 to agree to approve the override.

A joint House-Senate session started at 10:30 a.m. in Juneau to consider a revote. Speeches continued into Thursday morning, and a vote had yet to take place by 11:30 a.m.

“Please join us. The people of Alaska need your voice, and we can’t do it without you,” said Sen. John Coghill, R-North Pole, directing his comments to the lawmakers in Wasilla, in a speech from the floor.

Sen. Bert Stedman, R-Sitka, said every Alaskan has been disenfranchised because of the missing lawmakers.

“I don’t think my constituents ... are very happy with the function or dysfunction of a group of dissidents running away from their constitutional duty.”

Later Thursday morning, the joint session deferred a revote on the operating budget to take up a veto override vote on the state’s capital budget, which the governor signed into law Wednesday.

The capital budget is largely unfinished because of the refusal of the House Republican minority to authorize spending from the Constitutional Budget Reserve.

Spending from the Constitutional Budget Reserve requires the support of three-quarters of the House and three-quarters of the Senate. The governor’s vetoes would have freed money in the state treasury to pay the capital budget from the general fund instead, but the governor denied that option by also vetoing a portion of a scheduled transfer from the Alaska Permanent Fund to the treasury. That forces the Legislature to again pay for the capital budget from the Constitutional Budget Reserve.

“This governor is trying to hamstring the other two branches of government," she said. "This is the behavior we often see in failing democracies. The last time I checked, Madame President, this is not a dictatorship. We live in a democracy.”

At Wasilla Middle School, security was increased on Thursday. Signs weren’t allowed in the gym, and spectators sat in seats instead of on bleachers as on prior days. A legislative staffer gave a safety briefing before the meeting started and asked people to be respectful of one another. A day earlier, protesters had flooded the gym floor and took over lawmakers’ desks.

“Today, is the fourth day of the special session that was called in a proclamation by the governor and so we are here following the constitution and our statutes,” Costello told the group. “We do recognize that our colleagues in Juneau have not joined us this morning, so even though this is the only call on the Legislature we are not able to do business today.”

Costello told the group that the legislators in Wasilla are willing to work with those in Juneau.

The legislators stayed in the gym Thursday afternoon to talk to those in the crowd.

Thursday’s brief joint session in Juneau (begins at about 10:30):

Tegan Hanlon reported from Wasilla and James Brooks from Juneau