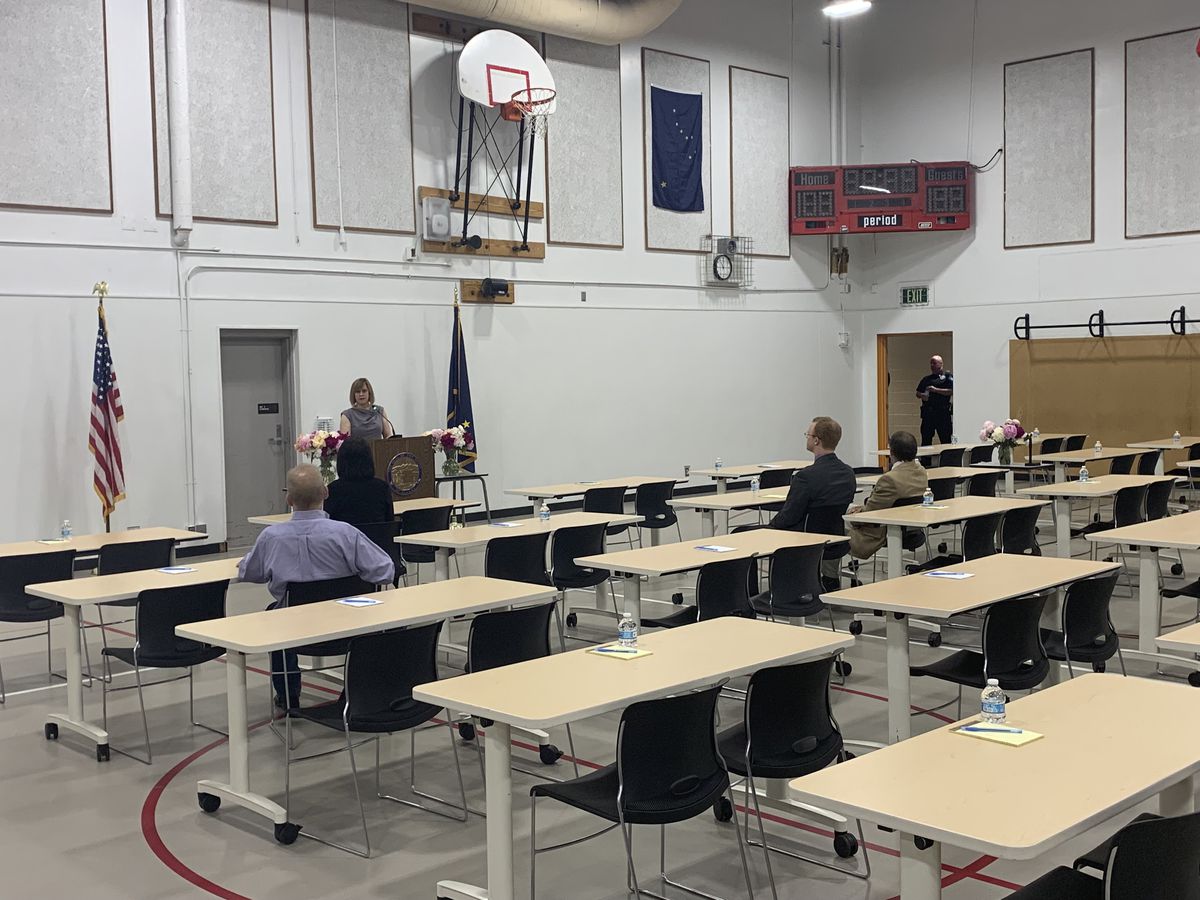 Sen. Mia Costello, R-Anchorage, talks at a brief meeting with four of her colleagues Thursday at Wasilla Middle School. The lawmakers then went into the crowd and spoke with individuals. (Tegan Hanlon / ADN)

Sen. Mia Costello, R-Anchorage, talks at a brief meeting with four of her colleagues Thursday at Wasilla Middle School. The lawmakers then went into the crowd and spoke with individuals. (Tegan Hanlon / ADN)

For the fourth straight day, Alaska state legislators remained at a divisive standoff over where to hold their special session, stalling crucial work as deadlines approach and as frustration mounts among Alaskans.

On Thursday, legislators gathered once again in two cities, hundreds of miles apart.

With a third of the Legislature refusing to go to Juneau, lawmakers in the state capital abandoned hope that they can override Gov. Mike Dunleavy’s controversial budget vetoes, which some believe will pull Alaska back into a recession.

“The attempt to override has failed,” Speaker of the House Bryce Edgmon, I-Dillingham, told reporters in Juneau Thursday afternoon, ahead of the final deadline Friday.

Asked whether there would be a re-vote before the deadline, he said, “I’m not expecting that to happen. Clearly, we don’t have 45 members as it is, and some members are leaving Juneau to attend to prior commitments.”

The path forward remained uncertain by the end of the day Thursday, as protests continued, and angry emails and calls flood legislators’ offices. Some legislators said Thursday they are working toward a proposal to bring the two groups together, but they declined to discuss details or provide a timeline, saying it was too soon. Dunleavy’s office has refused to make the governor available for an interview this week, but confirmed he was in Anchorage on Thursday. The state Senate isn’t scheduled to meet again until next week.

Meanwhile, amid the standstill, the legislators also have not set this year’s Permanent Fund dividend or completed the capital budget, and the impacts of the budget vetoes and the impasse continue to crystallize.

With no capital-budget vote to avert the automatic draining of specific savings accounts, thousands of Alaska students learned this week there was no money to pay for their scholarships.

In the face of budget vetoes, Anchorage’s Brother Francis homeless shelter prepared to reduce its capacity by more than half, and University of Alaska officials are ready to declare “financial exigency” Monday, allowing them to more quickly make cuts, including laying off tenured faculty.

“I don’t think anybody in the state has a true sense of what those vetoes do, how many federal dollars are attached to them, how many private dollars are attached to these vetoed state dollars, and really what the carnage is, not just from an economic standpoint but the standpoint of people’s lives, their families, their communities,” Edgmon said.

Three-quarters of the Alaska Legislature’s 60 members are needed to override a governor’s budget veto, the highest such hurdle of any state. A vote in Juneau Wednesday to throw out all 182 of the vetoes totaling $444 million failed with just 38 legislators present.

The other 22 lawmakers, all Republicans who generally align with Dunleavy, contend that the actions in Juneau are illegitimate. The Republicans continued to meet in a school gym in Wasilla this week, but they’re unable to take up official business because they lack majority support.

Dunleavy designated Wasilla, his hometown, as the location for the Legislature’s special session. At the center of the legislators’ fight is whether the governor has the power to pick that location. There’s dueling legal opinions and a lawsuit.

On Thursday, five legislators met in the Wasilla Middle School gym in front of a crowd of dozens, including a group of parents and children protesting the governor’s vetoes, and another group calling for budget cuts and $3,000 Permanent Fund dividend checks.

The legislators said it was a “technical meeting,” only requiring a few lawmakers and not the full group. Security was heightened at the school after protesters took over the meeting a day earlier.

“Today is the fourth day of the special session that was called via proclamation by the governor, so we are here following the constitution and our statutes,” Sen. Mia Costello, R-Anchorage, told the crowd during a brief, 2-minute meeting.

In Juneau on Thursday, some legislators in speeches blamed absent Republicans for what they described as dire effects of the governor’s sprawling budget vetoes. Sen. Bert Stedman, R-Sitka, said their absence from the capital has denied his constituents the ability to vote on an override.

Sen. John Coghill, R-North Pole, called on those in Wasilla to “please join us.”

“The people of Alaska need your voice, and we can’t do it without you,” he said.

“This governor is trying to hamstring the other two branches of government," she said, referencing a particular capital budget veto and the governor’s decision to punitively veto money from the budget of the Alaska Court System for its rulings on abortion rights.

"This is the behavior we often see in failing democracies. The last time I checked, Madame President, this is not a dictatorship. We live in a democracy,” she said.

Sen. David Wilson, R-Wasilla, was the only legislator to go from Wasilla to Juneau on Thursday. He had made a brief appearance in Wasilla Wednesday, including lunch with the governor and attending the middle school meeting. In Juneau, he told legislators that he believes the governor’s vetoes are not as bad as they have been made out to be.

The legislators in Wasilla have not wavered in their belief that they’re following the law and those in Juneau are not.

“Nothing going on in Juneau right now matters,” Rep. David Eastman, R-Wasilla, said in an interview Thursday. “If they wanted to override something — other than just for giving a speech for the next election — then they’ll find their way here tomorrow and they’ll have a vote."

Eastman said he supports the governor’s vetoes. He had voted against the state operating budget in the first place. He said he believed Friday’s override deadline had to pass before legislators in Juneau “come to the table.”

“In which case then Saturday will be a very interesting day,” Eastman said.

Costello said she continued to look through the operating budget Thursday for items that need to be addressed, such as restoring money for the senior benefit program, which the governor defunded. She said she had a meeting with people from the governor’s office Thursday.

Office of Management and Budget Director Donna Arduin has sat in the crowd for at least two of the meetings at Wasilla Middle School this week. She said she was serving as staff for the special session.

Asked Wednesday what her message was to Alaskans protesting the budget vetoes, she said, “I don’t do sound bites,” and referred a reporter to the governor’s spokesman.

Having abandoned hopes of changing the governor’s position on the operating budget, those in Juneau on Thursday decided not to cast an override vote on the state’s capital budget, which the governor signed into law this week after removing $10.8 million in funding for various projects.

The capital budget is largely unfinished because of the refusal of the House Republican minority to authorize spending from the Constitutional Budget Reserve.

Spending from the Constitutional Budget Reserve requires the support of three-quarters of the House and three-quarters of the Senate. The governor’s operating budget vetoes would have freed money in the state treasury to pay for the capital budget, but the governor denied that option by also vetoing a portion of a scheduled transfer from the Alaska Permanent Fund to the treasury. That forces the Legislature to again pay for the capital budget from the Constitutional Budget Reserve and thus requires the support of lawmakers in Wasilla.

The governor has been absent from public discussion about the legislative impasse.

For a third consecutive day, the governor’s office refused to make Dunleavy available for an interview.

Matt Shuckerow, the governor’s press secretary, said by phone that the governor was talking with legislators in Wasilla and Juneau, and he is “weighing his options.”

“The Legislature is ultimately responsible for coming together, the governor gave them an opportunity through a special session to move past this impasse," Shuckerow said.

‘A lot of politics’

“While the override opportunity is gone, we still can get progress forward. That’s also part of the conversations with the governor,” Giessel said.

Giessel said lawmakers right now are bound by the agenda set by the governor for the special session. That agenda includes only the Permanent Fund dividend. Legislators can’t fix the problems caused by the unfinished capital budget: The governor isn’t allowing them, she said.

“Right now, the call is very narrow. We don’t have the tools that need to be done,” she said.

Several lawmakers in Wasilla said they have a proposal in progress to bridge the divided Legislature, but they refused to discuss details. It could include the governor designating a different location for a special session, or the Legislature gathering the 40 votes necessary to call themselves into session, Costello said.

“I don’t have any intention of just going someplace because some number of other legislators want to go there, but if they want to do it legally, then I’ll be there,” Eastman said.

“I think that what you’re seeing is a lot of politics being played where it might look like we’re doing that, but we’re here supporting the constitutional call. We want to work with the governor on a new location that everyone can agree with, we want to be the problem-solvers,” Costello said, mentioning Anchorage and Juneau as possible meeting spots.

If the location issue can be settled, lawmakers might be able to draft a supplemental funding bill in order to reverse some or all of the governor’s budget vetoes. That would require either a supermajority of lawmakers or the support of the governor.

Meanwhile, some legislative activities may shift to Anchorage next week, legislators in Juneau said.

“Don’t be surprised if the House and Senate finance committees convene in Anchorage,” Edgmon said.

The Alaska Senate announced it will not hold a floor session again until July 18.

Also on Thursday, the House majority lost one of its 24 members when Rep. Tammie Wilson, R-North Pole, left the group rather than suffer a demotion from leadership. Wilson was the lone member of the majority who traveled to Wasilla (she went to Juneau after the first day of the special session) and the only legislator who voted against overriding the governor’s vetoes.

James Brooks reported from Juneau and Tegan Hanlon from Wasilla and Anchorage.