A decision by the governor, and legislators’ inaction, may spike the cost of electricity in rural Alaska 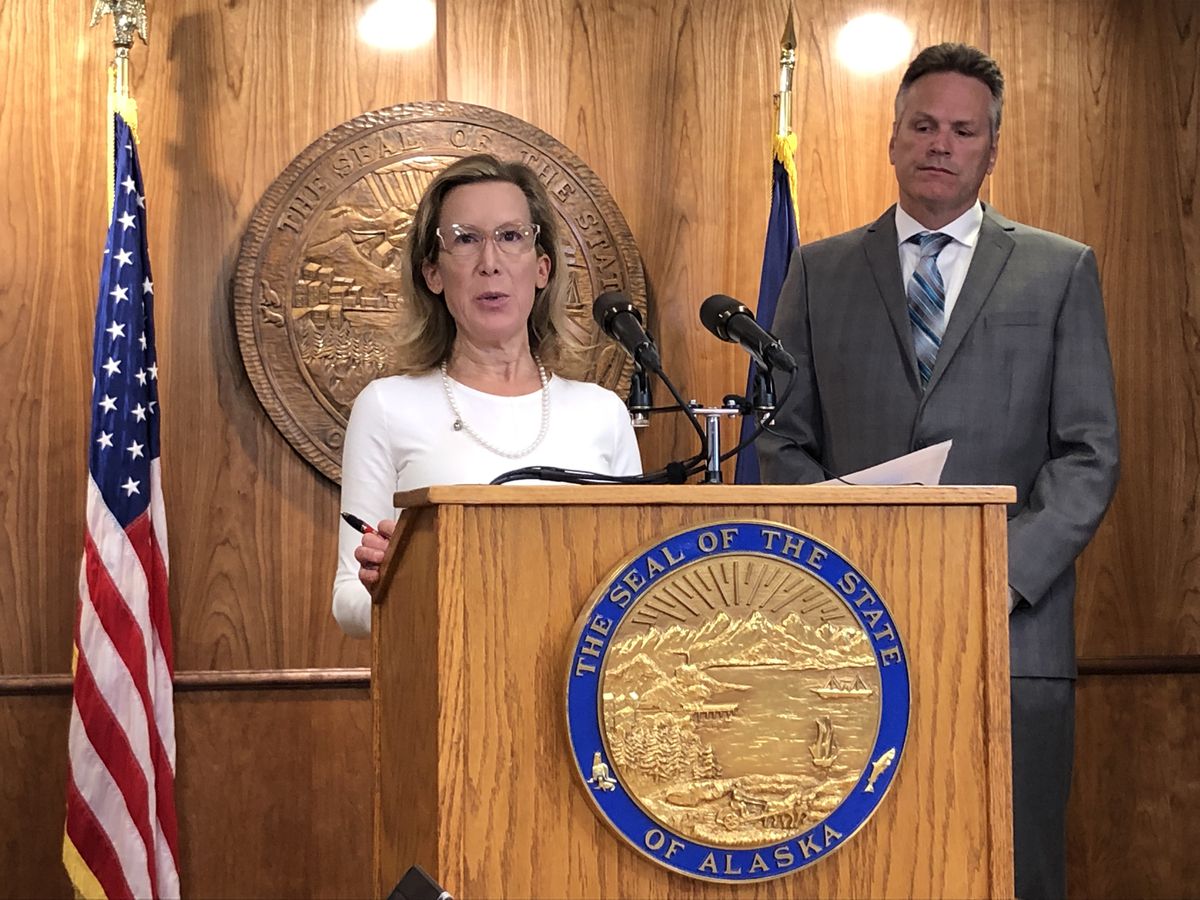 JUNEAU — A missed vote by the Alaska Legislature and a reinterpretation of the Alaska Constitution by Gov. Mike Dunleavy will cause more than 80,000 Alaskans to see a major jump in their electric bills this month, and the effects will only grow if an ongoing legislative deadlock continues through the end of the month.

Late Friday, Office of Management and Budget director Donna Arduin confirmed in a letter to lawmakers that the Power Cost Equalization Endowment Fund, worth more than $1 billion, will be drained alongside dozens of other savings accounts. Those accounts pay for things as varied as ferry service, oil spill cleanup, antismoking programs and college scholarships.

That drain was required by the state constitution after resistance by the Republican House minority denied lawmakers the votes needed to prevent it.

Alaska students have already received letters warning that they will not receive their state-paid college scholarships on time. Beginning next week, rural electrical customers will start feeling the effects of legislative deadlock as Power Cost Equalization payments, used to subsidize rural electrical prices, drop to zero.

“At this time, there is no funding for us to pay PCE for (fiscal year 2020), which started July 1,” said Curtis Thayer, executive director of the Alaska Energy Authority, by phone on Friday. “The average total PCE payment for July and August is about $2 million. That’s what communities will not be receiving as a whole.”

Thayer said the payments will be made retroactively if the Power Cost Equalization program is restored, but until then, homeowners and communities will face an immediate problem.

‘Cramming more down our throat’

Clay Koplin is the mayor of Cordova, a town of 2,200 people off the road system and on the edge of Prince William Sound near the mouth of the Copper River. He’s also CEO of the local electrical cooperative, and those two jobs make him one of the few people statewide with a firm grasp of the problems that are coming.

“The residential rate class would be looking at a 25 percent increase,” he said.

Other communities will see even bigger increases. In Lime Village, a community of 36 people north of Lake Iliamna, diesel fuel is flown in by air. Partially because of that, it has the highest electrical costs in the state — $1.77 per kilowatt-hour. The comparable rate in Anchorage is 19 cents per kilowatt-hour.

State subsidies lower Lime Village’s electrical costs to 99 cents per kilowatt-hour, but if the subsidy goes away, Lime Village won’t just have the highest-priced electricity in Alaska. It’ll be the highest-priced in the United States and possibly the world, according to figures from the Energy Information Administration and the World Bank.

[What’s the ‘reverse sweep’ and why has it become an issue in Alaska’s budget deadlock?]

According to figures published by the Alaska Energy Authority in March, 83,400 Alaskans in 194 communities received subsidies under the program.

Homes under the program get a subsidy based on the local cost of power for the first 500 kilowatt-hours of electricity they use each month. (According to the U.S. Energy Information Administration, Alaska homes averaged 601 kilowatt-hours per month in 2017.)

The program subsidizes the entire electrical load of street lights, water and sewer utility buildings and other qualifying “community facilities," according to PCE program documents.

Losing the electrical subsidy for those buildings is a big deal for Cordova, Koplin said.

That’s in a town with a total annual budget — including hospital and school — of about $10 million.

Atop other budget cuts from the governor and Legislature, “We’re just taking cuts in a lot of places, and this is just another brick in the wall,” Koplin said.

He said Cordova has reduced its budget by millions in recent years, but cuts by the state aren’t helping his community.

“We are doing our part, but it seems like the state is cramming more and more down our throat,” he said.

Cordova’s problems are the same ones faced by other communities, and legislators worry about the ripple effects.

“What we see is not just a rise in energy costs but a rise in the overall cost of living that will particularly hit communities that already have a high cost of living,” said Rep. Tiffany Zulkosky, D-Bethel. “It really hits those Alaskans twice as hard.”

The defunding of the Power Cost Equalization Program is the result of a chain of circumstances that began in February, when Dunleavy unveiled his initial plan plan to deeply cut Alaska’s budget. As part of that plan, he proposed paying this year’s power subsidy from the state’s general fund instead of an endowment fund intended to pay the subsidy.

Lawmakers switched the funding source back to the endowment fund as they rewrote Dunleavy’s budget.

Under a 1990 state constitutional amendment, program-specific savings accounts are supposed to automatically be swept into the Constitutional Budget Reserve at the end of each fiscal year. Because the state’s budget relies on specific savings accounts like the endowment fund, lawmakers each year approve what’s known as the “reverse sweep," which requires a supermajority three-quarters vote in the Alaska House and the Alaska Senate.

This year, the Republican House Minority refused to approve the reverse sweep and other spending from the Constitutional Budget Reserve in an attempt to pressure the House majority into approving a traditional Permanent Fund dividend, which this year would be about $3,000.

The program wasn’t included among the budget vetoes signed by the governor earlier this year, and in previous years, the endowment fund used for the power program would have been unaffected by the failure of the reverse sweep. However, starting in early June, the governor’s office — through the Alaska Department of Law and Office of Management and Budget — began redefining the list of accounts subject to the list.

Under the new definitions, the endowment is sweepable, and on June 30, it was swept.

A matter of equity

Legislators representing rural parts of Alaska said the existence of the program is a matter of equality. After the construction of the trans-Alaska Pipeline System, the state of Alaska used some of its newfound oil revenue on a series of major electrical power projects. There were new hydroelectric dams for coastal Alaska, a major electrical connection between Fairbanks and Anchorage, and subsidies for natural gas in Anchorage and other Cook Inlet towns.

“Some parts of the state were able to benefit from projects that provided massive economies of scale … but a lot of communities couldn’t benefit from that type of project, so in the interest of basic equity for all Alaskans, we established a different kind of asset,” said Rep. John Lincoln, D-Kotzebue.

To meet rural Alaska’s varied needs, the state created the Power Cost Equalization program in 1984, directly subsidizing electrical costs. Until the year 2000, the program was funded on a year-by-year basis, but rural lawmakers frequently struggled to convince their counterparts to pay for it.

“It was a fight every year to do that,” said Meera Kohler, executive director of the Alaska Village Electric Cooperative. Her organization operates the electrical grids of 58 communities statewide.

As she explained, the program at times received only 60 percent of its funding, even as eligibility restrictions reduced its cost.

In 2000, according to legislative documentation, the Legislature created a $100 million endowment fund to pay for the subsidy. The fund was invested, and the idea was that investment returns would cover the cost of the program. Additional deposits in 2002, 2007 and 2012 further boosted the value of the endowment fund, and although that fund was also used for such things as green-energy grants and community assistance payments, it still grew to $1.07 billion by June 30, according to the state Department of Revenue.

With the endowment fund gone, rural legislators worry that the work of decades has been erased and that preserving the program will again turn into an annual fight.

“It’s a slap in the face to rural Alaska,” said Speaker of the House Bryce Edgmon, I-Dillingham. “It’s a slap in the face to the legacy of all the powerful Alaska Native leaders who have roamed the halls of the Legislature and who put blood, sweat and tears into putting a program together that would help make electricity more affordable in a state that is poured in millions of dollars into projects around the state.”

One legislator speculated that the issue could end up in the courts if it isn’t fixed.

“If they stop, there probably will be litigation,” said Sen. Lyman Hoffman, D-Bethel. “That (defunding) is going cause a ripple effect across the state of Alaska, from Noorvik to Bethel to Barrow.”

[Meet the ‘reverse sweep,’ the Alaska Legislature’s next big obstacle]