‘Too much too quick’: Some Alaska business groups say they worry what Dunleavy vetoes will mean for state economy 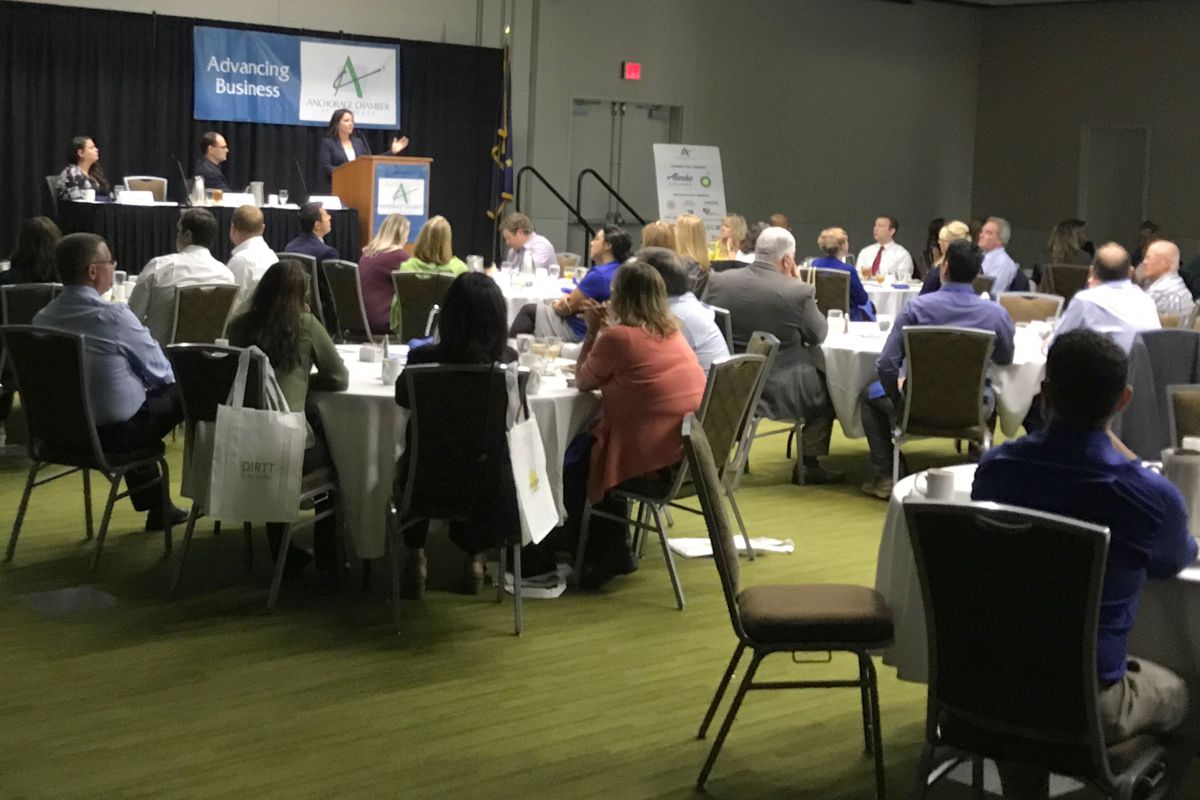 Alaska Chamber president Kati Capozzi addresses a room of business leaders in Anchorage on Monday, July 22, during a luncheon held regularly at the Dena’ina Civic and Convention Center. The statewide chamber has not taken a position on Gov. Mike Dunleavy’s vetoes to the state operating budget, but in recent weeks other Alaska business groups have voiced opposition to the cuts. (Annie Zak / ADN)

Alaska Chamber president Kati Capozzi addresses a room of business leaders in Anchorage on Monday, July 22, during a luncheon held regularly at the Dena’ina Civic and Convention Center. The statewide chamber has not taken a position on Gov. Mike Dunleavy’s vetoes to the state operating budget, but in recent weeks other Alaska business groups have voiced opposition to the cuts. (Annie Zak / ADN)

A number of Alaska business and industry groups have in recent weeks opposed Gov. Mike Dunleavy’s $444 million in vetoes to the state’s operating budget, over concerns about what the fallout might be on the state’s precarious economy.

Meanwhile, some prominent trade groups have not taken a specific position during the remarkably tense state budget debate. The governor’s office has declined to name business groups that support his vetoes.

Twenty business leaders who said they represent billions of investment dollars in Alaska argued in a newspaper ad in the Anchorage Daily News earlier this month that the $444 million in vetoes, atop the $190 million already cut by the Legislature, will eliminate critical public services and thousands of jobs, likely pulling the state back into a recession.

Two of the signatories in that ad were Ed Rasmuson, a retired banker and Rasmuson Foundation chairman, and Jim Jansen, chairman of freight transporter Lynden Inc. The two men were key donors to Dunleavy for Alaska, an independent expenditure group in support of the governor’s election last fall.

Rasmuson said many in Alaska’s business community don’t like what they’re seeing.

“The cuts are too much right away,” he said Monday. “We’ve got to do it on a gradual basis to get down to a certain figure. It should be negotiated with the governor and the Legislature, but it should not happen all at once.”

“Some (social service) organizations can’t survive with these massive cuts, and we are going to rue the day we’ve done this,” he said.

Since the failed override vote in the Legislature, lawmakers have remained gridlocked in Juneau. As of Monday, the Alaska House of Representatives had failed multiple times to approve a fix for the state’s capital budget and another key budget vote. A bill that has been introduced in the House would restore much of the funding cut by the vetoes.

The inability of lawmakers to reach an agreement is “disheartening,” said Kim Reitmeier, executive director of the ANCSA Regional Association composed of 12 CEOs for Alaska Native regional corporations.

“I’ve never seen anything this disjointed,” she said.

It’s hard to believe the state faces this situation, she said. “It’s just a little mind-boggling.”

An overwhelming number of Alaskans have said they support the governor, his spokesman Matt Shuckerow said recently.

“A lot of these folks will say privately that they support what the governor is doing,” Shuckerow said. “Unfortunately, the political climate has grown to where there’s a lot of anger and division, and so some people, perhaps business owners and groups and organizations, are choosing not to weigh in publicly on some of these things."

Public testimony at hearings by the House Finance Committee last week was more than 70% in favor of restoring the cuts vetoed by Dunleavy, according to a tally distributed by Alaska House Majority Coalition.

A compromise with more moderate cuts and a sustainable Permanent Fund dividend would be best for the state, said Jansen, with Lynden.

“It is inappropriate and irresponsible to hold the capital budget hostage for a $3,000 PFD,” Jansen said in an emailed statement Monday. (Paying out a full PFD to Alaskans was a central point of Dunleavy’s campaign last year.)

Jansen said he was “extremely” concerned the Legislature might not reach a deal on the capital budget in time to avoid losing large amounts of federal matching dollars. The stalemate is “causing uncertainty that will adversely impact the economy,” he said.

Rasmuson said he supports future annual cuts on the scale of the $190 million the Legislature made this year, right-sizing state government over time.

“I’m very upset with what’s going on, obviously, but it’s in the hands of the Legislature and the governor,” Rasmuson said. “For God’s sake, we have got to get a capital budget approved, because we will lose over a billion dollars worth of federal funding and that will hurt everybody.”

Rasmuson said he has “more than a little” buyer’s remorse after supporting Dunleavy for governor. Rasmuson is a Republican and Dunleavy was the only option, Rasmuson said.

‘Too much too quick’

In an “open letter” to lawmakers earlier this month, the ANCSA Regional Association argued “the drastic cuts” proposed by the governor “will plunge Alaska into a fiscal and social crisis.”

The group still holds that view, Reitmeier said on Monday.

“To get seven banks who are all in a fist fight every single day over customers, loans, deposits … is a pretty extraordinary effort,” Michael Martin, vice president of the group, said in a recent interview. He’s also chief operating officer at Northrim.

The banking association supports a sustainable budget, it said in the letter, but the massive proposed reduction “is too much too quick.”

In a response letter from Dunleavy back to Martin addressed the same day, the governor disagreed that the cuts would be too much for the economy to handle.

“I am not sure why the bankers in Alaska are so adamantly opposed to individual Alaskans receiving a statutory PFD,” Dunleavy said in the letter. Providing a full Permanent Fund dividend “will help restore the necessary trust with the people of Alaska. Only then will we have a real opportunity to establish a stable, durable fiscal plan.”

Ken Fuller, an owner of Arcticorp, a commercial rental property company in Anchorage, said Monday he supports the large cuts proposed by Dunleavy. The state has waited too long to make them and there are too many state employees, he said.

“This is our last best chance to right-size the government relative to our income as a state,” Fuller said.

“We are in favor of the vetoes in terms of the dollar amounts,” said Bethany Marcum, the group’s executive director and a former aide to Dunleavy when he served in the state Senate.

Judy Eledge, president of the Anchorage Republican Women’s Club, said her personal view is that supporters of Dunleavy don’t have a lot of money to spend on ads and getting their voice out like unions or other groups.

“We are a silent majority,” she said.

The Alaska Oil and Gas Association does not historically take a position on the state budget, said president Kara Moriarty, and that’s also the case this year. The Alaska Support Industry Alliance ⁠— which represents the oil and gas sector ⁠— also has no position, said CEO Rebecca Logan.

The Alaska Chamber does not have a position on the budget proposal or Dunleavy’s vetoes, chamber president Kati Capozzi said during a Monday presentation to a room of business leaders at the Dena’ina Civic and Convention Center.

“I think there’s a keen interest from all the statewide business associations that we see some resolution and we see it soon,” Capozzi said in an interview later. “We’re all anxious to know what the plan is and get on with business.”

The Alaska Miners Association did not take a position on the Legislature’s override vote, said executive director Deantha Crockett. But members of the group are “tremendously” concerned about gridlock in Juneau.

“And not from a ‘What’s going to happen to the mining industry?’ standpoint,” she said in an interview Monday. “It’s a, ‘What happens to my employees that live here? What happens when there is such gridlock like this?’ Investors around the world are looking at Alaska and going, ‘That place is a zoo right now.’”