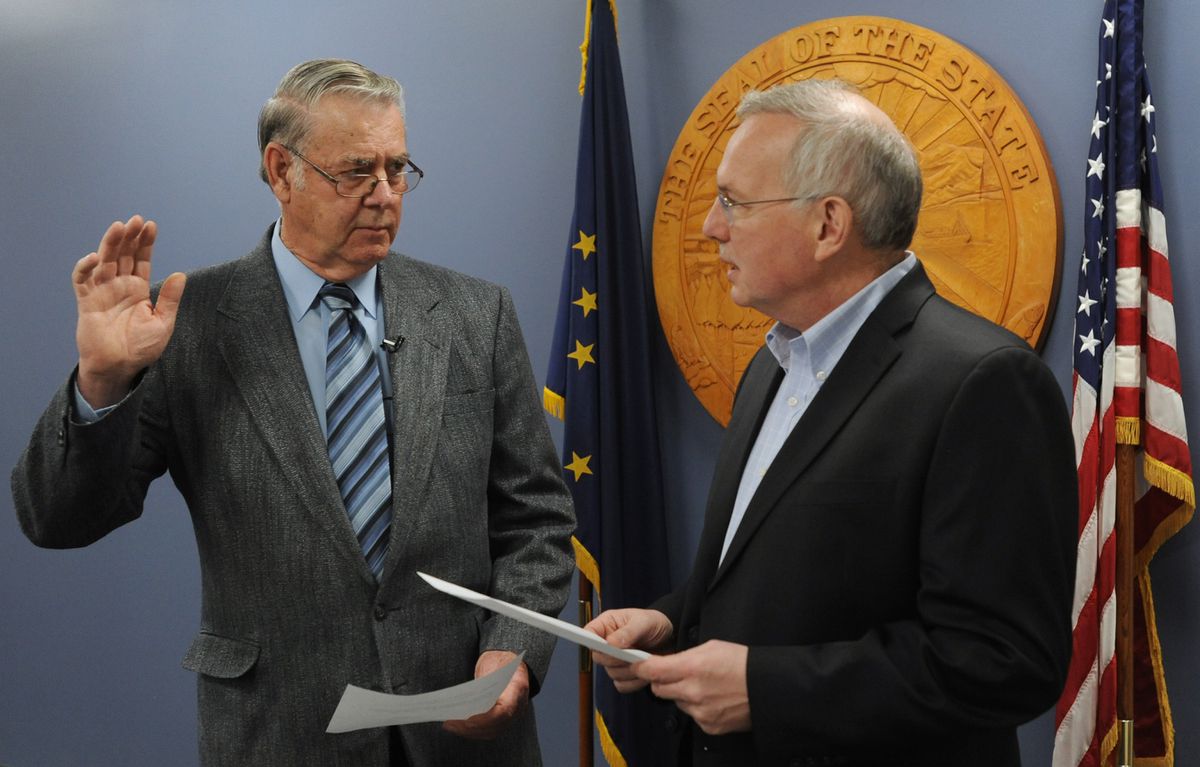 Mel Gillis, a Republican from South Anchorage, was sworn in by Bryce Edgmon, Speaker of the Alaska House of Representatives, in Anchorage on Monday, Dec. 2, 2019. (Bill Roth / ADN)

Mel Gillis, a Republican from South Anchorage, was sworn in by Bryce Edgmon, Speaker of the Alaska House of Representatives, in Anchorage on Monday, Dec. 2, 2019. (Bill Roth / ADN)

The Alaska Legislature is back to 60 members.

In a Monday vote at an Anchorage coffee house, Republican members of the Alaska House of Representatives unanimously confirmed Mel Gillis for the South Anchorage House seat vacated by Josh Revak. Gillis, a registered big-game guide since 1974, has lived in House District 25 for more than 30 years.

Like Revak before him, Gillis will be a member of the House’s Republican minority, which includes 16 of the body’s 40 members. Several Republicans said Gillis told them he intends to vote in favor of a “full” Permanent Fund Dividend, referring to the traditional formula in state law.

Last month, Revak was confirmed to a state Senate seat vacated by the death of Sen. Chris Birch. After Revak was sworn in as a state senator, Gillis was among three candidates nominated by local Republicans to fill the vacancy. The other two were Jamie Donley and Forrest McDonald. Gov. Mike Dunleavy chose Gillis after interviewing all three.

“Ultimately, we came away with a unanimous vote for him,” said House Minority Leader Lance Pruitt, R-Anchorage.

“He brings, I think, some good experience in his previous life, of being a successful businessman, a successful guide,” he said.

Gillis, born in Texas on Aug. 2, 1943 as Bias Melvin Gillis, has lived in Alaska for more than five decades and will be the state’s oldest serving legislator. According to Dunleavy, he came to the state following the 1964 Good Friday Earthquake, working in reconstruction. He subsequently worked in the state’s nascent oil and gas industry, becoming a labor leader.

But it was in hunting and fishing that Gillis made his biggest mark. He established Sandy River Lodge on the Alaska Peninsula, selling it in 2014. In the 1980s, he became involved in the political fights over the Alaska National Interest Lands Act. He has stayed involved with the politics of big-game hunting in Alaska in the decades since.

After Dunleavy picked Gillis, Pruitt said he encouraged House Republicans to talk to the prospective legislator. On Monday, they met at Coffee and Communitas, an South Anchorage coffee house, to vote. Not all of the House’s Republicans were physically present, but all had either indicated their vote in advance or participated telephonically.

“Everybody seemed to be onboard” with his confirmation, said Rep. Jennifer Johnston, an Anchorage Republican who is in the coalition majority.

A few hours later, Gillis was sworn in by Speaker of the House Bryce Edgmon, I-Dillingham, at the Anchorage Legislative Information Office and immediately left for a meeting of the regulatory board for the state’s big-game guides. He did not immediately return a phone call or text message, and the House Republican Minority press secretary was unable to set up an immediate interview.

In a prepared written statement, he said, "I am honored to have been selected to work on behalf of the wonderful people of District 25. We have a lot of complex issues to cover this year. I am looking forward to meeting the remainder of my colleagues, hearing from my friends and neighbors about the issues that matter most to them, and preparing for the upcoming legislative session.”

Rep. Sara Rasmussen, a fellow Anchorage Republican, said she feels it was a “positive step” for House Republicans to vote unanimously.

The Legislature’s Republicans have been deeply divided by budget issues this year, particularly the Permanent Fund Dividend. Six Republican members of the House are serving in the coalition House majority with Democrats and independents. A seventh House Republican, Rep. Gabrielle LeDoux of Anchorage, is separate from both majority and minority.

Gillis has already signed a letter of intent for next year’s Republican primary for his seat, indicating he intends to run again.

“He’s been in his district for a really long time, so I’m hoping he’ll be able to hold down that seat,” Rasmussen said.