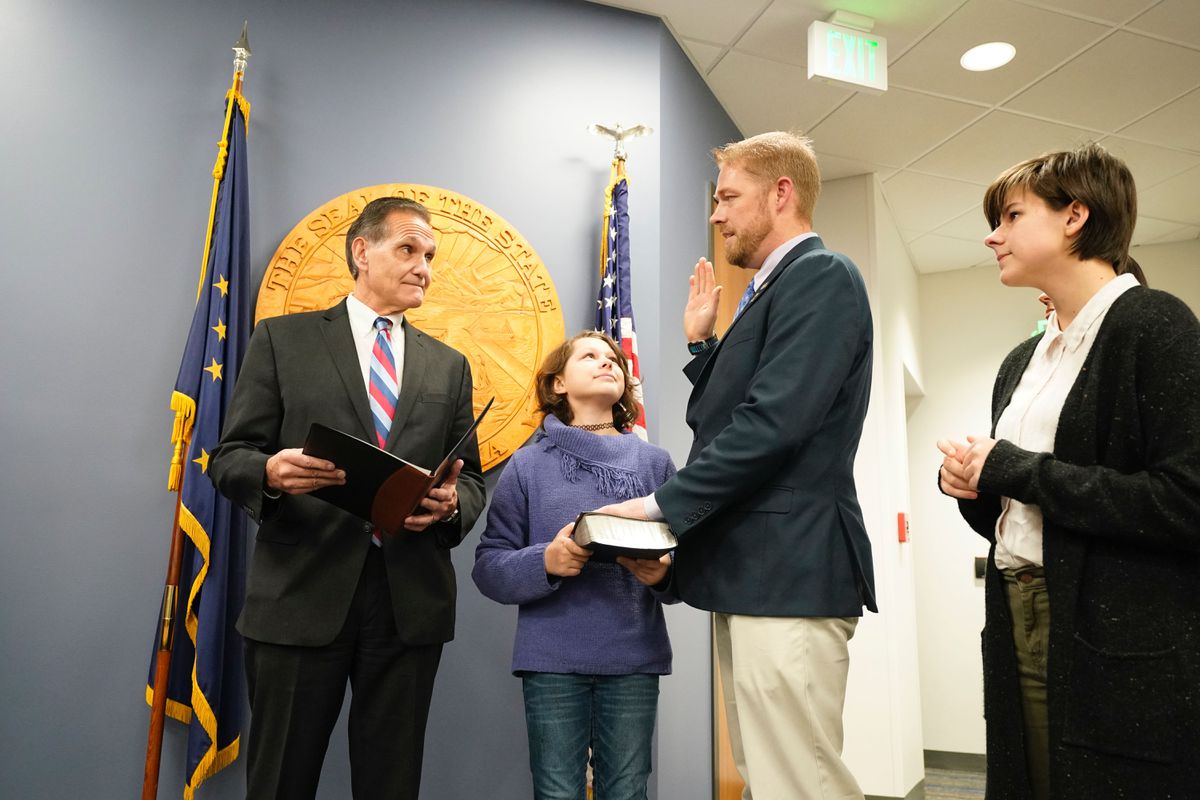 Sen. Josh Revak, R-Anchorage, is sworn in by Lt. Gov Kevin Meyer on Saturday, Nov. 2, 2019 at the Legislative Information Office in Anchorage. Revak, a former state representative, was nominated to fill a seat vacated by the death of Chris Birch. Revak's daughter Sydney Revak, 11, held the Bible as he was sworn in, and daughter Keilah Revak, 13, is pictured at right. (Loren Holmes / ADN)

Sen. Josh Revak, R-Anchorage, is sworn in by Lt. Gov Kevin Meyer on Saturday, Nov. 2, 2019 at the Legislative Information Office in Anchorage. Revak, a former state representative, was nominated to fill a seat vacated by the death of Chris Birch. Revak's daughter Sydney Revak, 11, held the Bible as he was sworn in, and daughter Keilah Revak, 13, is pictured at right. (Loren Holmes / ADN)

The 12 Republican members of the Alaska Senate have added a 13th.

In a closed-door vote Saturday afternoon, Senate Republicans confirmed Gov. Mike Dunleavy’s choice of Rep. Josh Revak for the South Anchorage state Senate seat vacated by the death of Chris Birch. Revak’s confirmation ends months of tension exacerbated by Senate Republicans’ divide over the proper size of the Permanent Fund dividend, and the new senator will control a swing vote when the dividend debate resumes in January.

Lt. Gov. Kevin Meyer was on hand in the Anchorage Legislative Information Office to swear in the new senator. Dunleavy and local Republicans will now begin the process of picking Revak’s replacement in the House. Under state law, the governor has 30 days to choose.

Dunleavy had previously said he could call a dividend-specific special session following Revak’s confirmation, but lawmakers say that is unlikely to happen. Such a special session could begin no earlier than December, and legislators say the governor still lacks the support needed to pay a dividend using the traditional formula in state law.

Revak himself said he was “very humbled and honored and excited” by his confirmation, which came after Senate Republicans turned down Rep. Laddie Shaw, R-Anchorage, for the seat. It was the first time in state history that Republican senators had rejected the choice of a Republican governor who picked from a short list of candidates nominated by local Republicans.

Senators did not disclose the precise tally for the confirmation vote. Ten senators were present. Bert Stedman of Sitka and Mike Shower of Wasilla were held up by weather, Giessel said. She said Revak still had at least seven votes in his favor, as required by state law.

Sen. David Wilson, R-Wasilla, said that “everything was fine and dandy and no major issues anywhere.”

The tone of Saturday’s vote was significantly different from the first, failed attempt to fill the Senate seat, which was stymied by differences over the Permanent Fund dividend.

Before his death in August from a ruptured aorta, Birch was one of the Senate’s loudest voices in favor of a “surplus dividend,” one paid using money left over after state services are paid.

That put him at odds with Dunleavy, who has supported a “full” dividend using the traditional distribution formula.

The Senate voted 11-9 this year in favor of the surplus dividend, and Dunleavy’s first choice to replace Birch was Rep. Laddie Shaw, R-Anchorage.

Shaw, one of the two House members in Birch’s district, voted against the surplus dividend earlier this year.

Senate Republicans who favor the surplus dividend voted against Shaw, and his nomination failed 6-6.

After Shaw was rejected, Dunleavy picked Revak. Though Revak also voted against the surplus dividend, Senate President Cathy Giessel, R-Anchorage, and Senate Rules Chair John Coghill, R-North Pole, each announced their support for Revak in October after voting against Shaw.

Their support — and the continued support of full-PFD Senate Republicans — meant Revak’s confirmation was almost guaranteed.

What remains unclear is why surplus-PFD senators changed their votes.

“I’m older and outspoken; Josh is younger and softspoken,” Shaw said, suggesting that Revak’s attitude was more acceptable to the senators.

Giessel declined to say why she changed her mind.

Sen. John Coghill, R-North Pole, said he thinks Shaw has the right idea, and that a “different approach between one candidate and the other” was key.

He said Revak was asked about the dividend issue during his closed-door interview, and Coghill found him “thoughtful and open to discussion.”

Shaw, who waited in the public lobby as senators talked to Revak and voted, was excited and happy for the new senator.

“He’s a winner, my colleague and brother in arms. And now he’s my senator,” he said.

Dunleavy to fill House vacancy next

Saturday’s swearing-in begins Revak’s term as a senator under state law. It also formally vacates Revak’s House seat, allowing that process to move forward. Local Republicans will create a list of nominees, and under long custom, the governor would pick a successor from that list.

The governor has 30 days from Saturday to select Revak’s replacement. The Alaska Republican Party is taking applications for the seat through 5 p.m. Friday, and district officials will vote on their choices Nov. 11.

As with Revak in the Senate, the House replacement is subject to a confirmation vote. That vote would include the House’s 23 Republicans and is expected to be much less tumultuous.

Both Revak in the Senate and his replacement in the House will face voters in the fall 2020 election.

After the Alaska Legislature approved a surplus dividend instead of the amount preferred by Dunleavy, the governor said he anticipated a special session to approve a supplemental payout.

After Birch’s death, the governor said he would wait until a replacement was named before calling lawmakers into a special session.

Speaking on talk radio Friday, the governor said he would be speaking to the leaders of the House of Representatives about a special session, “and we’re going to make a decision pretty quick.”

Speaker of the House Bryce Edgmon, I-Dillingham, said he and House leaders did talk to the governor, but a special session never came up.

With 30 days’ advance notice required before a session and lawmakers preparing to embark upon holiday travel, “I do not see a window of time that it would be possible to have a third special session,” Giessel said.

Meyer said that while the final decision is in the hands of the governor, he agrees that time constraints make it unlikely.

Rep. Gabrielle LeDoux, R-Anchorage, said it’s clear that lawmakers haven’t changed their minds on the dividend, and a special session would be pointless.