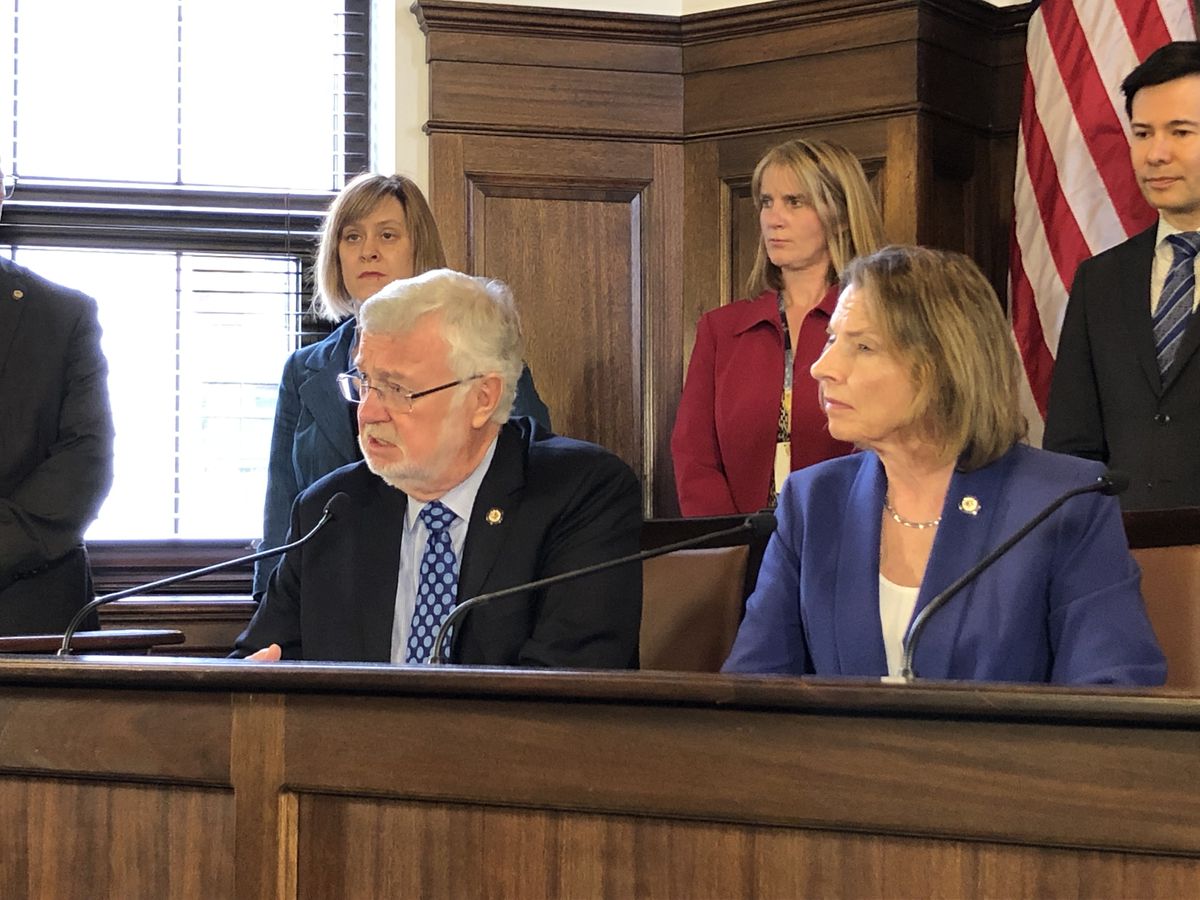 Sen. Gary Stevens, R-Kodiak and chairman of the joint House-Senate Legislative Council, speaks to news media on Tuesday, May 28, 2019 to discuss the potential of a lawsuit by the Alaska Legislature against Gov. Mike Dunleavy. At right is Senate President Cathy Giessel, R-Anchorage. (James Brooks / ADN)

Sen. Gary Stevens, R-Kodiak and chairman of the joint House-Senate Legislative Council, speaks to news media on Tuesday, May 28, 2019 to discuss the potential of a lawsuit by the Alaska Legislature against Gov. Mike Dunleavy. At right is Senate President Cathy Giessel, R-Anchorage. (James Brooks / ADN)

JUNEAU — The administration of Gov. Mike Dunleavy has released $30 million in contested public school funding, but it has not given up defending against a lawsuit asserting the Alaska Legislature’s ability to set budgets more than a year in advance.

The Alaska Department of Law confirmed Monday that the state will continue an appeal into the Alaska Supreme Court. The state’s legal arguments to the court are due March 9.

“The lawsuit over education funding continues,” said Attorney General Kevin Clarkson in a written statement. “As required by the superior court’s order in the case, the State released the $30 million in extra education funding that was passed in 2018. It remains the state’s position that appropriations cannot come from future unknown revenues in a future year, and that question will ultimately be answered by the Alaska Supreme Court.”

A Superior Court judge ruled in favor of the Legislature last year, saying that the Legislature acted legally in 2018 when it set budgets for both the 2018-2019 and 2019-2020 school years.

Legislators had left the state’s school funding formula unchanged but agreed to provide a $20 million bonus in 2018-2019, then a $30 million bonus in 2019-2020. The administration last year sought to cut funding for public schools, then backed off those plans, but not before lawmakers filed a lawsuit that defends the Legislature’s power to set spending in advance.

The $30 million bonus is divided among districts based on the number of students they have. Anchorage School District receives $8.66 million.

“I am pleased that the administration bowed to public pressure and imminent defeat in the courts, but much of the damage has already been done,” said Rep. Harriet Drummond, D-Anchorage, in a written statement Jan. 31.

“The uncertainty left school districts unable to craft their budgets and forced good teachers to seek work out of state at a time when we have a serious teacher shortage. If the governor wants to turn over a new leaf and win back the public trust, he has a long way to go,” she said.