Concerts and longer hours could be in store for Alaska breweries, but lawmakers have the final say 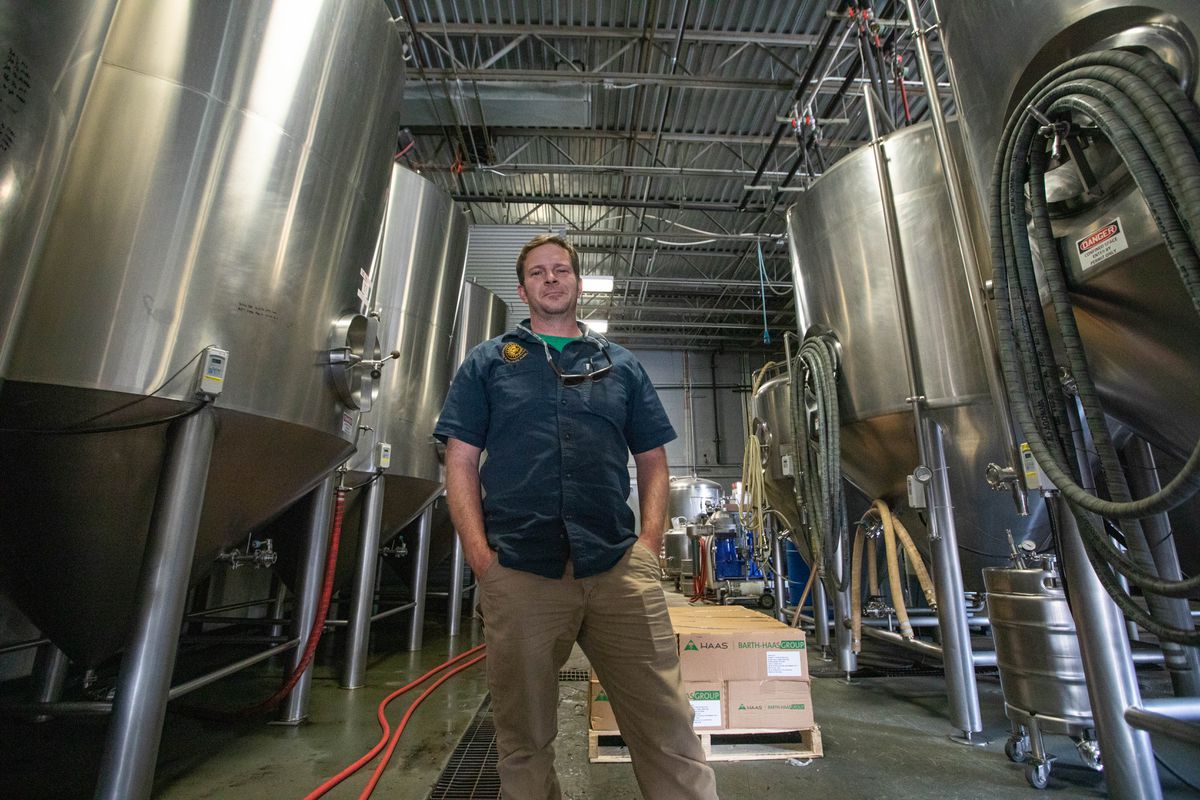 Lee Ellis, director of operations at Midnight Sun Brewing, photographed in the brewery on Thursday, Aug. 29, 2019. Ellis is also president of Brewers Guild of Alaska, which is concerned about proposed state regulations that would restrict certain kinds of activities in the brewery and attached tasting room. (Loren Holmes / ADN)

Lee Ellis, director of operations at Midnight Sun Brewing, photographed in the brewery on Thursday, Aug. 29, 2019. Ellis is also president of Brewers Guild of Alaska, which is concerned about proposed state regulations that would restrict certain kinds of activities in the brewery and attached tasting room. (Loren Holmes / ADN)

JUNEAU — There will be dancing in Alaska’s breweries. Distilleries and wineries, too.

Under the proposed deal, the state will further restrict the number of brewery taprooms. In return, existing taprooms will be allowed to stay open until 10 p.m. — two hours later than currently permitted — and can host four music concerts per year, something currently banned.

Breweries also will be permitted to host some public events, dancing in taprooms will no longer be banned, and other restrictions on entertainment will be relaxed. Without changes, state law on those topics will remain a mishmash of unclear language and wording overruled by the Alaska Supreme Court.

The new arrangement will be tested next week when the Alaska Senate votes on the idea and the rest of Senate Bill 52, a 123-page modernization bill that has been in the works for eight years.

In 2018, similar legislation passed the Senate but failed in the House when a late amendment sought to cut brewery serving sizes. That put breweries and bars at odds, killing the bill. Alaskans in the alcohol industry say the new compromise means that won’t happen again.

“Everybody’s given some. It’s not perfect for anybody, but I’m hoping that ... it’s the piece that can put an end to the bar wars articles,” said Paul Thomas, chairman of the board of the Alaska Cabaret, Hotel, Restaurant and Retailers Association, the state’s leading alcohol-industry group.

Lee Ellis of Midnight Sun Brewing Co. is president of the Brewers’ Guild of Alaska, which negotiated with CHARR to draft the compromise. He said that in order to get enough legislative support to modernize Alaska’s alcohol laws and fix problems facing breweries and distilleries, the entire industry needed to get along.

“I think that’s what legislators wanted to see. They wanted to see everyone come together, and now, after nine years, we’re finally there,” he said.

In Alaska, alcohol licenses are limited by population, with one bar, package store, brewery, winery and distillery for every 3,000 people. Most towns and cities have many additional grandfathered licenses older than those population limits. That means anyone who wants to open a new bar must buy a license from someone who already has one.

In recent years, Alaska’s drinking habits have changed along with those in the rest of the United States. Alaskans are drinking less, and they’re drinking higher-quality alcohol: more craft beer and cocktails, less mass-market beer.

That has encouraged new businesses. In 2018, Alaska had 42 breweries, the sixth-most per capita among U.S. states, according to the Brewers Association, a trade group representing craft breweries nationwide. The number of distilleries has seen similar but smaller growth.

Under the new approach, breweries must pay for a separate taproom license if they want to sell beer directly to customers. Furthermore, those separate licenses will be limited to 1 per 12,000 residents, limiting competition.

In Anchorage, Broken Tooth Brewing supplies most of the beer served at Moose’s Tooth Pub and Pizzeria and Bear Tooth Theatrepub. Right now, Broken Tooth’s brewpub license prevents it from selling more than 1,200 barrels of beer per year through stores.

Head brewer Tyler Jones said that if Senate Bill 52 becomes law, that 1,200-barrel cap goes away. Jones knows he can sell more — their alcohol distributor wants it — but until that happens, state law limits brewpubs.

“By definition, the state of Alaska is limiting our growth there, and as a consequence, limiting how much taxes we pay,” he said.

At Girdwood Brewing Co., co-owner Josh Hegna said the prospect of longer opening hours is good for his business. He envisions summertime hikers dropping in after a day in the mountains.

He’s also excited about the possibility of hosting fundraisers and events but said that as a community-focused business, the issue is “bigger than breweries and what we are getting.”

In more than 100 pages, Senate Bill 52 rewrites almost every aspect of Alaska’s alcohol laws. More than 12,000 hours of work has gone into the bill, said Sarah Oates, CHARR’s president and CEO, with input from public health and public safety organizations as well as the alcohol industry.

The Alaska Mental Health Trust, the state’s advisory board on alcoholism and drug abuse, the Rasmuson Foundation and other organizations have backed the bill.

Trevor Storrs, president and CEO of Alaska Children’s Trust, wrote a letter in support of the bill. He said his organization is particularly interested in a mandatory beer-keg registry that will make it easier to track the people responsible for underage drinking parties.

Diane Kaplan, president and CEO of the Rasmuson Foundation, said her organization also supports the keg registration requirement and is also interested in a provision that sets up rules and regulations for alcohol delivery services. The state does not currently regulate alcohol shipments through FedEx, UPS and similar companies. (The U.S. Postal Service does not ship alcohol.)

For backers of the bill and the brewery compromise within, their biggest remaining concern is that the bill could be derailed by personal-interest amendments from individual lawmakers. Speaking in front of the Senate Finance Committee, Oates said both CHARR and the Brewers Guild are prepared to oppose any amendment that threatens to derail the bill.