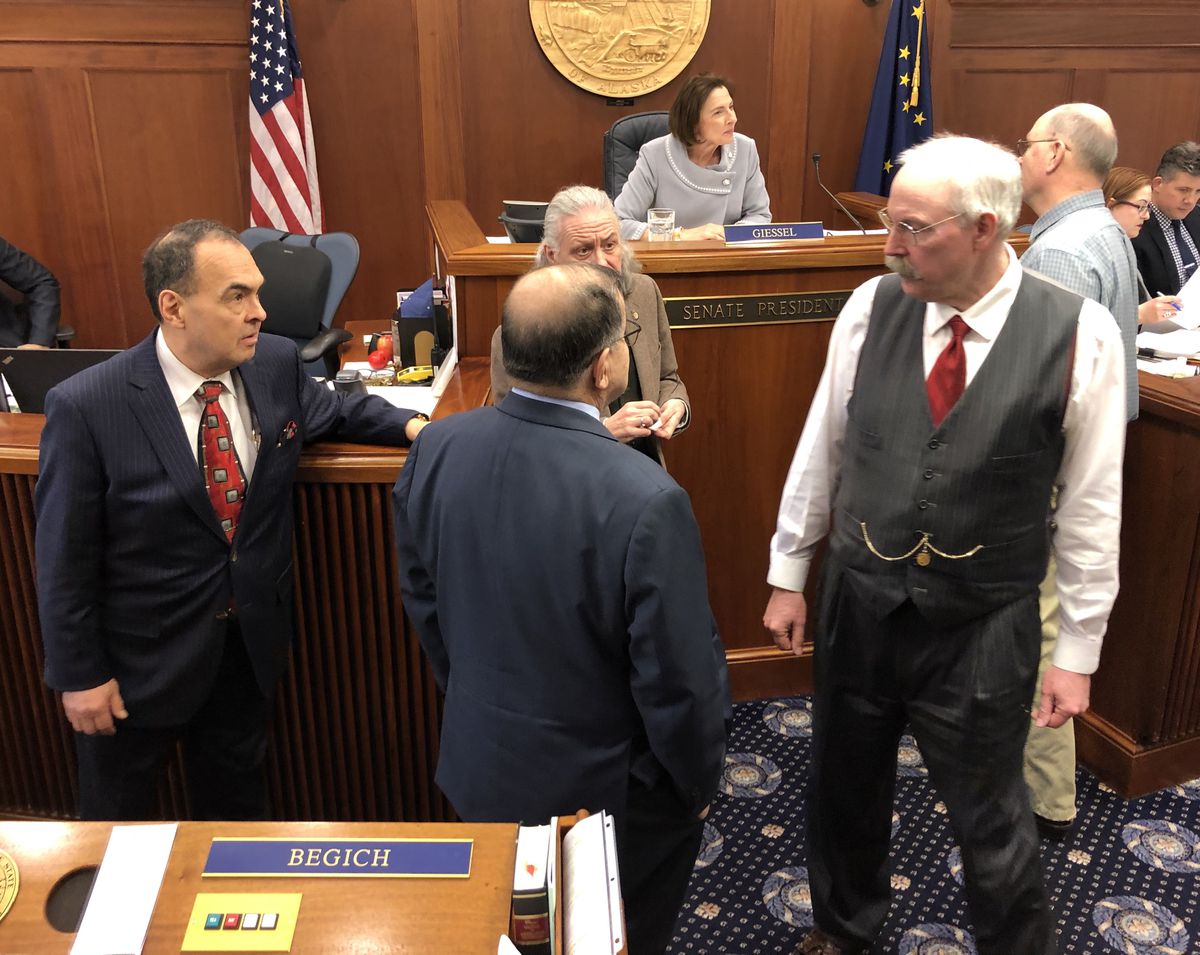 Senators gather in front of the rostrum belonging to Senate President Cathy Giessel, R-Anchorage, during a break in the deliberations of the Alaska Senate on Monday, March 23, 2020. (James Brooks / ADN)

Senators gather in front of the rostrum belonging to Senate President Cathy Giessel, R-Anchorage, during a break in the deliberations of the Alaska Senate on Monday, March 23, 2020. (James Brooks / ADN)

The Senate’s plan, which must be reconciled with a competing budget plan by the Alaska House, calls for one of the dividends to be paid in the spring and the other in the fall.

House lawmakers rejected the Senate plan late Monday, forcing the creation of a six-member committee ordered to come up with a compromise.

Senators said they want to provide some economic aid to Alaskans as the coronavirus-driven recession spreads. A proposal for a $1,300 spring dividend failed 9-10, and senators also rejected a proposed $3,200 fall dividend.

The Senate’s spending plan covers the fiscal year that begins July 1, and in an unusual move, it includes both operating costs and construction projects.

Normally, the Legislature approves an operating budget and a separate capital budget that covers construction and renovation projects. This year, lawmakers have combined both bills in an attempt to adjourn the legislative session faster.

The Senate bill includes $30 million in extra funding for K-12 schools and $75 million to cover the medical costs of the coronavirus pandemic.

That’s much less than the $1 billion requested by Gov. Mike Dunleavy, but lawmakers have said they are reluctant to give the governor that much spending authority without having a better idea of what it will be used for.

Sen. Click Bishop, R-Fairbanks, said senators are drafting a coronavirus economic-aid bill, which is why they were reluctant to increase the Permanent Fund dividend.

Spending in the Senate’s version of the budget is up significantly from the budget approved last year by lawmakers, even after additional spending was retroactively added to last year’s spending plan.

This year’s two dividends would cost about $1.36 billion atop the $4.6 billion spent on services and construction, requiring the Legislature to violate a self-imposed cap on spending from the Permanent Fund’s earnings reserve.

Conversely, Reinbold voted for a larger dividend and for the two-dividend plan opposed by other lawmakers.

Sen. Jesse Kiehl, D-Juneau, said extra spending on the dividend is inappropriate because it reduces the amount of the Permanent Fund, whose earnings will be needed in future years.

“We’ve got to help, but not at a generational cost,” he said.