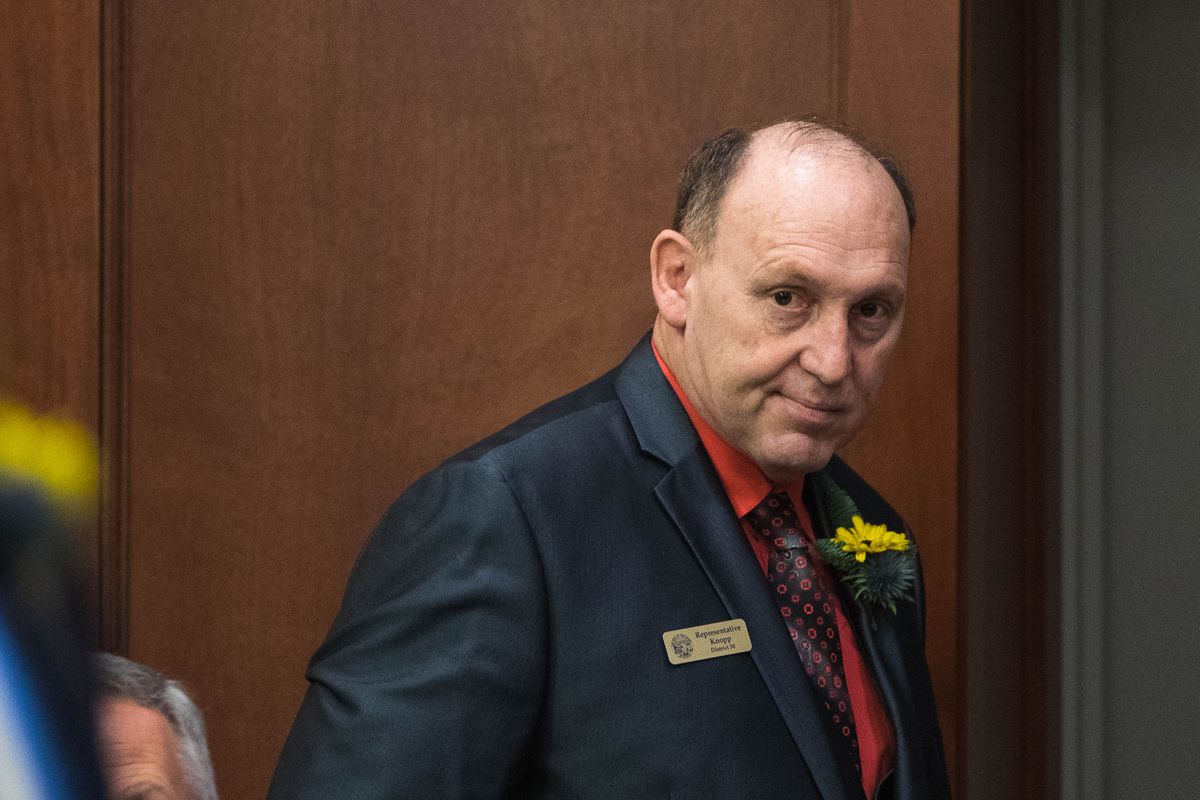 Rep. Gary Knopp, R-Kenai, on the first day of the legislative session on Tuesday, Jan. 15, 2019 at the Alaska State Capitol in Juneau. (Loren Holmes / ADN)

Rep. Gary Knopp, R-Kenai, on the first day of the legislative session on Tuesday, Jan. 15, 2019 at the Alaska State Capitol in Juneau. (Loren Holmes / ADN)

Alaska and American flags will fly at half-staff across Alaska in memory of state Rep. Gary Knopp, who was among the victims of Friday’s midair plane crash above Soldotna.

Gov. Mike Dunleavy issued a statement Friday on behalf of himself and his wife, Rose.

“The First Lady and I wish to express our heartfelt condolences to Representative Knopp’s family as they mourn his untimely passing,” Dunleavy said. “Throughout his 42 years on the Kenai Peninsula, Gary became well known as an avid outdoorsman, a skilled pilot, and a dedicated public servant. His presence will no doubt be missed by those he faithfully served.”

[NTSB recovering planes in midair collision near Soldotna that killed 7, including legislator and local pilot]

Born in Whitefish, Montana, Knopp was a certified flight instructor and registered pilot who moved to Alaska in 1979 and worked for many years as a general contractor. He was elected to the Alaska Legislature in 2016 after serving on the Kenai Borough Assembly and was a candidate in this year’s Republican primary for House District 30.

Knopp’s name will remain on the ballot, and if he wins the primary, Alaska Republican Party officials will name a replacement.

The city of Kenai and the Kenai Peninsula Borough offered their condolences, as did state Sen. Peter Micciche, whose legislative district included Knopp’s.

“We live in a small, tight community here in the Central Peninsula. When I heard the horrific sounds of a plane crash this morning, which occurred very close to my home, I knew there was a high probability it involved someone we knew well,” Micciche said in a statement.

“I’m devastated and shocked to learn of the crash that claimed Gary Knopp’s life,” House Speaker Bryce Edgmon, of Dillingham, said in a statement. “Gary was a one-of-a-kind leader and a true Alaskan who worked tirelessly for his district in the Legislature. He will be missed by many.”

Rep. Louise Stutes of Kodiak called him a close friend and said she was heartbroken and devastated. Rep. Steve Thompson, of Fairbanks, in a statement called Knopp “one of the nicest guys I’ve ever met.”

Sen. Tom Begich, a Democrat from Anchorage, said in a statement he was stunned by the news of Knopp’s death.

“Gary was a friend,” Begich said. “As a legislator, he was a man of conscience and duty. A person I trusted and cared for, I knew he had the state’s and his constituents’ best interests at heart, always. His wife Helen and his family are all in my thoughts today.”