NTSB begins investigation of midair collision near Soldotna that killed 7, including legislator and local pilot 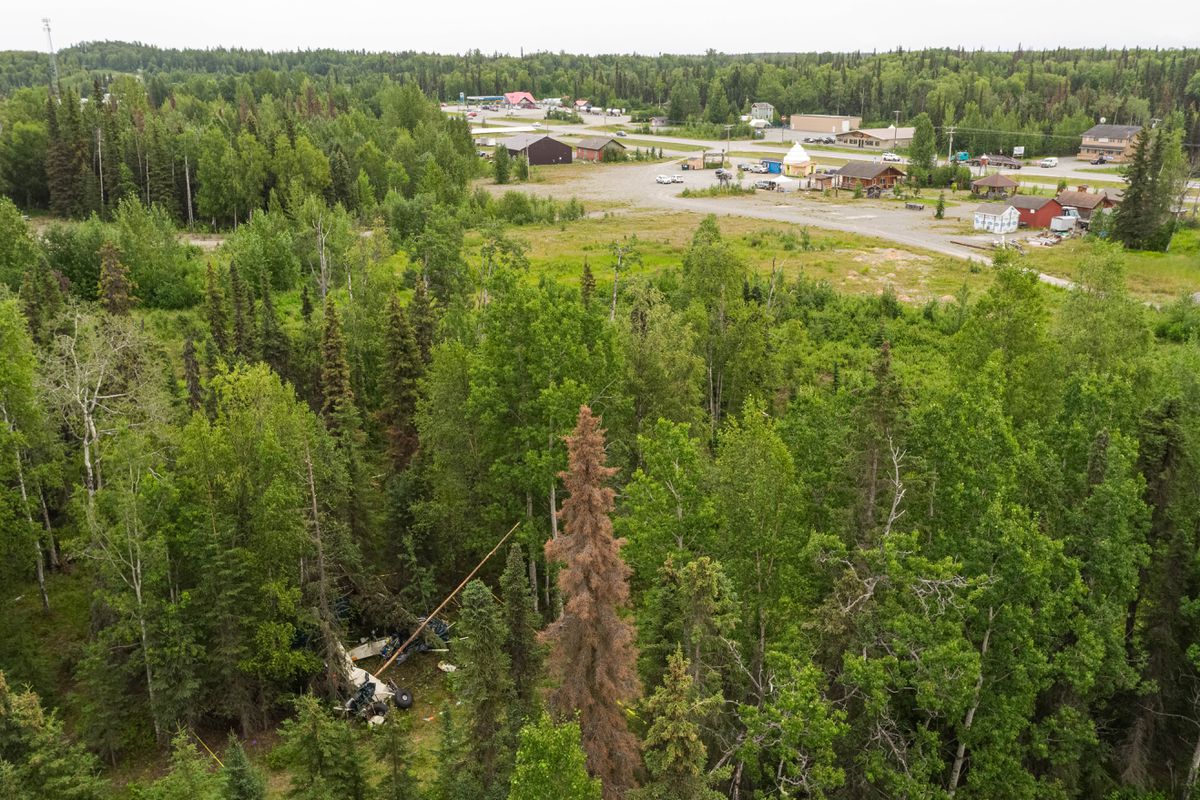 Wreckage from a fatal midair collision lies in the woods on Friday near the Sterling Highway and Mayoni Street in Soldotna. (Loren Holmes / ADN)

Wreckage from a fatal midair collision lies in the woods on Friday near the Sterling Highway and Mayoni Street in Soldotna. (Loren Holmes / ADN)

Investigators are trying to figure out what exactly occurred when two planes collided in midair near the Soldotna airport on the Kenai Peninsula on Friday, killing seven people including a Kenai lawmaker.

The only person in the other plane, a single-engine Piper PA-12, was 63-year-old state Rep. Gary Knopp of Kenai, troopers and federal aviation officials said.

Six people were confirmed dead at the scene while one person died on the way to Central Peninsula Hospital in an ambulance.

The federal National Transportation Safety Board was recovering the two planes, NTSB Alaska chief Clint Johnson said Saturday. The agency hoped to be finished with recovery efforts by the end of Saturday, and the goal is to bring the two planes to a secured location in the Wasilla area, Johnson said.

Hopefully, in the next two weeks the agency will “be able to piece those airplanes back together” to understand how the two planes came together, Johnson said.

He also said it’s “way too early to discuss cause at this point, we are definitely just in the preliminary stages and information gathering stages.”

When determining what happened in a crash, the NTSB examines three areas: man, machine and environment, he said.

By Saturday, nothing had been ruled out, he said.

High Adventure Air Charter on Friday posted a message on its website confirming that one of its aircraft was involved in the crash.

Bell, the Beaver’s pilot, was part of a family that owns and operates High Adventure Air Charter, based on Longmere Lake in Soldotna. The business offers fishing, hunting, bear viewing and glacier tour trips as well as custom charters.

The charter plane, which was equipped with floats, took off from Longmere Lake and was headed to the west side of Cook Inlet, Johnson said.

The Piper PA-12 was equipped with wheels and took off from the Soldotna Airport, he said, but investigators do not yet know where it was headed.

How exactly the two planes collided is what investigators are trying to learn.

Witnesses described the midair collision, which they say produced a tooth-rattling sound and sent debris flying. Alaska State Troopers said they began getting reports of the crash 2 miles northeast of Soldotna’s airport just before 8:30 a.m. Friday. Most of the wreckage landed about 200 yards from the road, which was closed briefly due to safety concerns and debris.

National Weather Service reports from the Soldotna airport for Friday morning showed clear visibility, with broken clouds at 10,000 and 4,500 feet.

State Sen. Peter Micciche, a Republican from Soldotna, said in a statement that he “heard the horrific sounds of a plane crash” and immediately figured he knew someone involved.

“I have known Gary Knopp and Greg Bell for most of my life,” he said. “Gary has served the Kenai Peninsula community for decades. I have flown with Greg and never felt to be in better, more safety-focused hands while in the air. We are reeling from the loss to our community.”

We live in a small, tight community here in the Central Peninsula. When I heard the horrific sounds of a plane crash...

Knopp, a longtime contractor who was also a flight instructor and pilot, was elected to the Legislature in 2016. Gov. Mike Dunleavy on Friday ordered U.S. and Alaska state flags to be flown at half-staff in honor of Knopp for three days beginning midday Friday and ending at sunset Monday, with flags returning to full-staff at sunrise Tuesday.

In a statement to FOX Carolina, the family wrote that Heather and Caleb began dating in 2010 before marrying in 2019 and were in the process of buying a larger home to start their family. Mackay and Kirstin Wright were planning to marry and had been dating since 2011.

Heather and Caleb were high school sweethearts, and so were Mackay and Wright, the statement said.

“They all had a love of each other and their families and animals and traveled all over the world together,” the statement said.

Heather was a middle school art teacher at Dawkins Middle School, according to a statement from Dr. Darryl Owings, the superintendent of the Spartanburg County School District Six.

“Heather was an inspiring teacher who had a tremendous impact on her students and colleagues,” Owings said in the statement. “She was a wonderful person who was well-loved by our school community.”

Owings said the Hulsey family has a strong connection to the district, calling the accident “a tragedy beyond words.”

Mackay Hulsey was a personal fitness trainer at the Firm Fitness Center in Spartanburg, according to a Facebook post from the gym.

Wright, Mackay’s girlfriend, “was a loved member of our family,” the post said. Wright’s Facebook page says she worked in marketing and e-commerce.

When I say our gym is a family, it truly is. We are a team and we see each other almost every day and work together to...