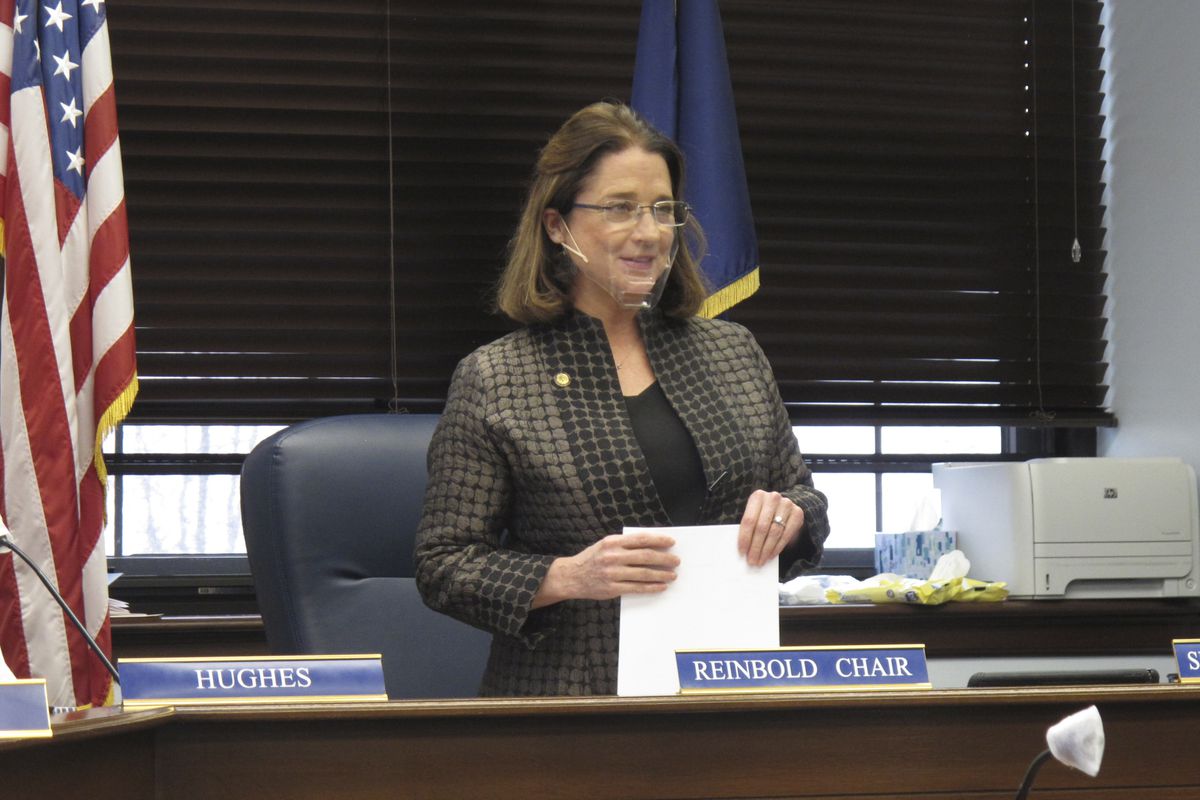 Alaska state Sen. Lora Reinbold stands in a hearing room before the start of a Senate Judiciary Committee meeting on Friday, March 12, 2021, in Juneau, Alaska. Reinbold, who state Senate leaders say has not been following protocols meant to guard against COVID-19, participated in the hearing by video conference while other members met in the committee room. (AP Photo/Becky Bohrer)

Alaska state Sen. Lora Reinbold stands in a hearing room before the start of a Senate Judiciary Committee meeting on Friday, March 12, 2021, in Juneau, Alaska. Reinbold, who state Senate leaders say has not been following protocols meant to guard against COVID-19, participated in the hearing by video conference while other members met in the committee room. (AP Photo/Becky Bohrer)

The removal is effective immediately, and Reinbold will be replaced by Sen. Roger Holland, R-Anchorage.

In February, Alaska Gov. Mike Dunleavy accused Reinbold of spreading misinformation about COVID-19 and the state’s response. He said the administration would not send people to testify in front of the Judiciary committee, an act that has stalled work on some Dunleavy priorities, including several proposed constitutional amendments.

Reinbold accused fellow senators of bowing to pressure from the governor and called Monday’s action a “distraction” from her work to hold state government accountable.

Reinbold will keep all other committee assignments and is still a member of the Senate’s 14-member majority, said Senate President Peter Micciche, R-Soldotna.

When asked whether she agreed with that statement, Reinbold said, “it’s an open question type of thing.”

Members of the majority said Monday’s vote came in part because Reinbold has repeatedly violated rules on civility and broke an agreement that says members should not disparage others on social media.

“We would like a more positive outcome from relationships, from the way committees are run, from respect for others in the building, respect for members, staff, those that are testifying,” Micciche said.

Micciche said the governor had no role in Monday’s decision and that the COVID-19 policy also was not a factor, but other senators said Reinbold’s violations of the Capitol’s COVID policy and opposition to Dunleavy did contribute to their votes Monday. Reinbold was the only lawmaker who voted against making Holland the new Judiciary chair.

Reinbold’s behavior drove Monday’s action, members of the Senate majority said. Some pointed to an incident last week between Reinbold and Sen. David Wilson, R-Wasilla, during a meeting of the Senate Health and Social Services Committee.

Masks are mandated in the state Capitol, and Reinbold repeatedly pulled hers away from her face as she spoke. That made the committee’s nonpartisan staff uncomfortable, and recordings show them leaving the room.

“We have masks on, there’s a plastic barrier anyway, it’s excessive,” Reinbold said. “I simply said that of people that have so much space, knowing that everyone’s testing negative, knowing that masks are on, it’s overdone, and maybe they should consider not having to work so closely with people.”

Wilson paused the meeting to talk to Reinbold, and with no staff available to continue, Wilson was forced to abruptly adjourn. If the situation continues, he told Reinbold, he would ask the Senate Rules Chair to draw up a resolution calling for Reinbold’s expulsion from the Alaska Senate.

“No one senator should have the power to stop the flow of business in the Senate,” he said.

He said it’s one thing to have a dispute between lawmakers, but when Reinbold said the staffer should find a new job, he was offended.

“It’s different to attack a staff member or a member of the public. It crosses a new line,” he said.

Micciche said Monday’s vote may be temporary. Reinbold could return, he said, if her behavior improves.

“Your star pitcher sometimes gets pulled from the game temporarily. And you look forward to the point where they’re back on the mound. That is our position,” he said.

In the meantime, Holland said, he intends to hear and advance legislation.

“My concern is that Sen. Reinbold may have let some of her disagreements with the administration, not associated with the bills, kind of get in the way,” he said.

“It’s important we get public testimony, testimony on the record, it’s important that we get invited speakers to present the pros and cons of the legislation. And that if it’s a good bill, it’s good for the state of Alaska, then we move it on,” he said.