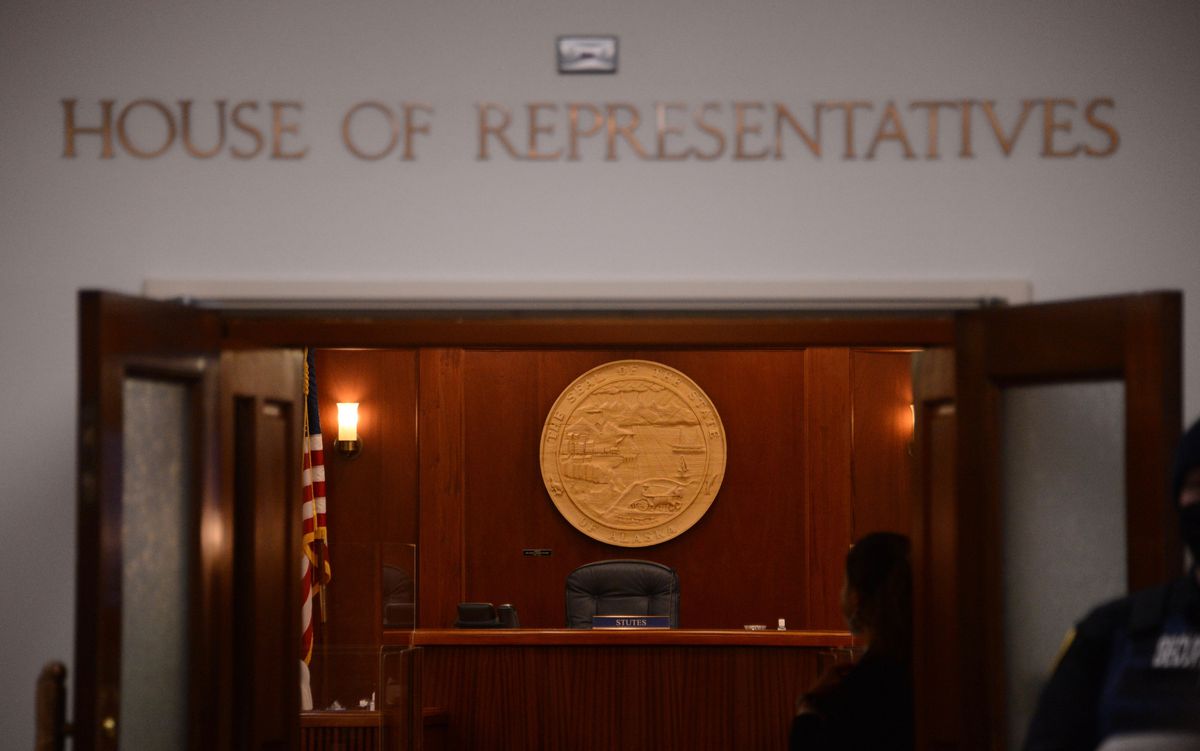 The empty chambers of the Alaska House of Representatives are seen on Thursday, Feb. 11, 2021. (James Brooks / ADN)

The empty chambers of the Alaska House of Representatives are seen on Thursday, Feb. 11, 2021. (James Brooks / ADN)

JUNEAU — The Alaska House of Representatives is deep in debate on a state operating budget that includes plans for a massive federal aid package. Aside from that package, the budget is not significantly different from a proposal introduced earlier this year by Gov. Mike Dunleavy.

Lawmakers worked Friday evening and most of the day Saturday, considering amendments on the floor of the House. On Saturday evening, it wasn’t immediately clear whether lawmakers would finish their debate that day or whether it would continue Sunday.

The House’s version of the budget will be compromised with the as-yet-unwritten Senate version before May 19, lawmakers say, then sent to Dunleavy. The governor may veto the budget, effectively sending it back to lawmakers, or he may cancel individual line items. He cannot add items.

The amount of this year’s Permanent Fund dividend has not yet been set, but on Friday morning, leading House lawmakers proposed a $500 dividend in a separate spending bill. Under the House’s budget plan, that figure — which would cost $355 million — could be paid without breaking a limit on spending from the Alaska Permanent Fund.

On Saturday, the House was one vote short of approving a $2 billion budget amendment that would have broken that limit and added a $3,000 Permanent Fund dividend to the budget.

The amendment, which failed 20-20, was sponsored by Rep. Kevin McCabe, R-Big Lake.

“This is where you get to put your vote where your mouth is on Facebook and every other social media. You get to vote for the full PFD,” he said.

He and other lawmakers argued that the state should follow the state’s traditional Permanent Fund dividend distribution formula. That formula has not been used since 2016 but remains in state law.

Rep. Jonathan Kreiss-Tomkins, D-Sitka, opposed the amendment, pointing out that approving such a large dividend would require breaking a second law — the limit on annual spending from the Permanent Fund.

Breaking that limit reduces the amount of money available for dividends and services in the future, he said.

In the state budget year that starts July 1, the Permanent Fund will contribute $3.1 billion to the state treasury. All taxes — including oil taxes — are expected to contribute another $1.6 billion.

That $4.7 billion is close to the cost of providing existing state services with no dividend.

But this year, the state is also receiving $1 billion in economic aid from Congress that may be spent flexibly. House lawmakers have proposed using some of that aid to replace tax dollars in the state budget, freeing those dollars for use in the dividend.

The resulting budget spends about $4.2 billion for the operations of state agencies. Because lawmakers have not advanced Dunleavy’s plan to borrow money for construction projects, at least $125 million is needed for the state’s capital budget, which funds construction and renovation projects. Some lawmakers support a figure closer to $200 million.

That leaves about $350 million uncommitted and easily available for the dividend.

The Alaska Senate’s budget proposal remains unfinished; it will be unveiled once the House finishes its work.